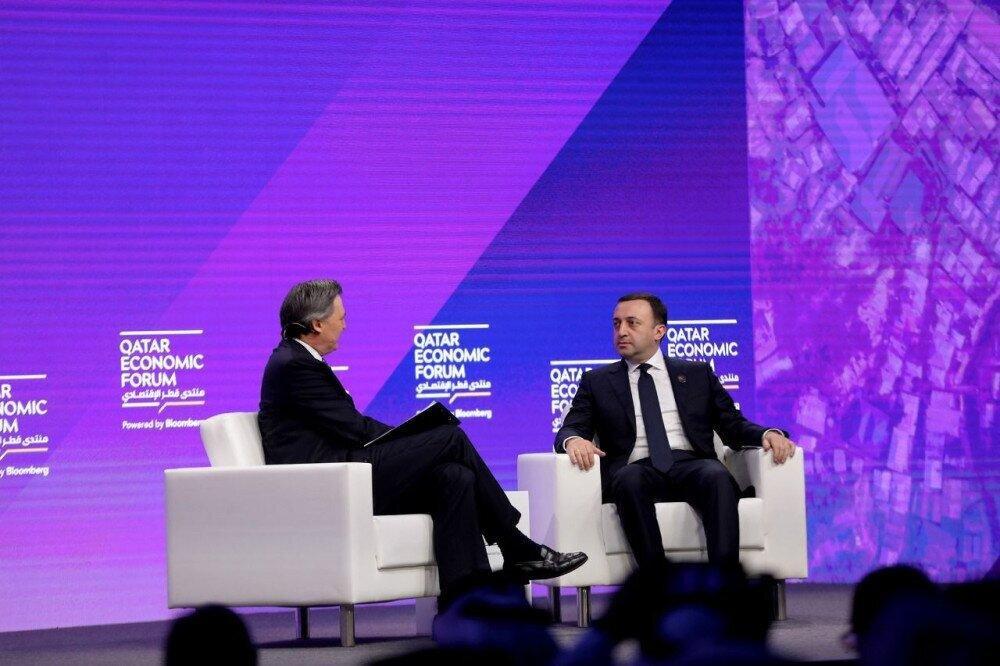 In 2008, we had an invasion of Russia into Georgia, our country. Russia invaded Georgia and occupied 20% of our territory, which is still occupied by Russia. And Russian troops are in Georgia, in our territory; so, basically, we are living with Russian troops, - Georgian Prime Minister Irakli Gharibashvili said at a Qatari Economic Forum.

According to the Georgian PM, during that time, 2008, no one in this world paid enough attention-let's be very open and frank-to the fact that a sovereign nation, the independent country of Georgia, was invaded by Russia, a neighbour country, occupied 20% of our territory, and there was no reaction, no adequate, proper reaction from the world. No sanctions were imposed on Russia.

"Of course, we are worried about the security situation of our nation and people. Politically, of course, we support Ukraine, at every international platform, whether it is the UN, the EU, OSCE-we joined more than 260 resolutions and statements, everything we could do.

Of course, we are part of the international, global financial system, and one of the clear examples that our reaction was adequate was that we made it very clear publicly that no sanctioned individual or company would be allowed to use Georgia to bypass the sanctions. And one clear example is VTB Bank. The moment it was sanctioned, the National Bank of Georgia, together with the Government, worked very closely and rapidly, within a week, we managed this deal. We solved the issue but we made it clear that we Georgians cannot impose national economic sanctions on Russia, for very obvious reasons-because we have our own national interests, our own security challenges, economic challenges-that is basically our motivation, And Georgia is not the only country that did not impose national economic sanctions on Russia. Because of the vulnerability of our country, because you cannot find many countries which are occupied by Russia, and taking into account the geography of our country, you can easily understand where we are.

I want to repeat that I as Head of Government must think about the security of our people. Of course, politically, we align with the international community. We are in full coordination with our international partners, American and European partners. That's our position. For example, Moldova, another Associated Trio member, did not impose economic sanctions on Russia for very obvious reasons-they have maybe even more security challenges.

The European Commission's decision is unfair. But, of course, we understand. We heard from European leaders that they decided to grant the status to Ukraine because Ukraine is at war. And Moldova, as a very close country to Ukraine, is in a very difficult situation: economy, security challenges, and so on. Of course, if you compare Georgia's performance, our reforms and everything, and if it would be the merit-based approach, Georgia would be the first country to be granted the candidate status. Why? Because of the very concrete deliverables, results, and performance of our country. But, of course, all three nations: Georgia, Moldova, and Ukraine were granted European perspectives, which is a historic decision of the EU, because European perspectives mean that the country will become a member of the EU. And, of course, the candidate status will follow under certain conditions. But I want to make it very clear that conditions were put on all three nations, which is a very normal practice to other countries which were associated, then later candidate countries.

As I said, we heard the official positions of European leaders. For example, President Macron said publicly a few days ago that the EU decided to grant the candidate status to Ukraine because Ukraine is at war. It's kind of encouragement, a bonus.

More than 80% of our nation support Euro-Atlantic integration, and we, our party and Government, did everything we could since we came to power in 2012. We signed the Association Agreement with the EU, the FTA, visa-free regime. Now we officially applied for membership. As for NATO membership, this is our determination. In 2017, we made several constitutional amendments to put into the Constitution that Georgian foreign policy's path is Euro-Atlantic. This was during my first premiership in 2015 when we inaugurated a joint training center with NATO. At that time, Secretary General Stoltenberg was in Tbilisi, so this is a clear demonstration of our very close cooperation. This is our motivation to become a member of NATO as well. But, of course, we have strategic patience, but strategic readiness. We understand it does not depend only on our wish to become a member of NATO. It depends on the consensus that all member states of NATO should agree to grant membership to NATO. But let's be very frank-we are not naïve, we understand that Georgia has problems, territorial problems with Russia. We must solve them first and then become a member of NATO. This is the understanding of the European and NATO member countries.

In response to your question about dealing with Putin to solve our territorial problems with Russia, I started my conversation from our our experience, right? In 2008, we experienced a large-scale, full-scale war. In the 1990s, when Georgia regained independence, we had two wars in our breakaway regions: Abkhazia and [South] Ossetia, separatist regions. And Russians, at that time, thirty years ago, were helping these separatist groups. We fought against Russia three times over the last thirty years. Our Government's policy is to restore territorial integrity and sovereignty through peaceful negotiations.

We, Putin and I, have not had any direct contacts since we came to power in 2012. There have been no political consultations, only economic and trade relationship exists. Therefore, this is the reality we live in", - said Irakli Gharibashvili.