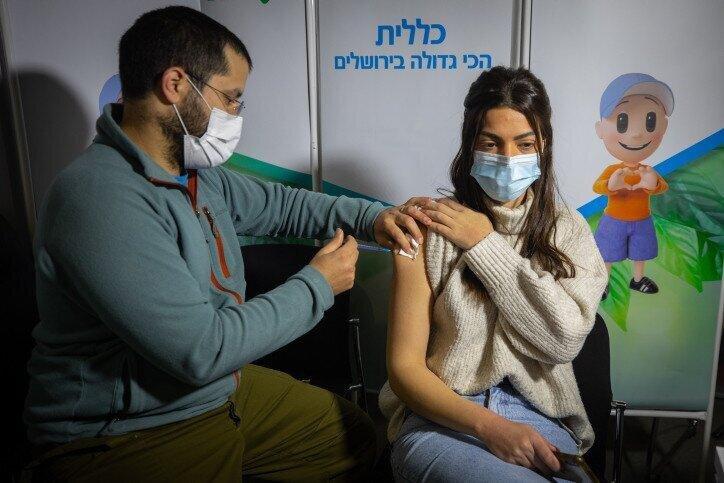 The number of first doses administered every day is also picking up speed, with over 10,000 shots given each of the past two days, up from a few thousand a day.
The Health Ministry and Magen David Adom launched an initiative on Monday to send mobile vaccination stations to all towns and neighborhoods with a low vaccination rate.
In the past few days, the number of serious patients appeared to be stabilizing: there were 678 on Tuesday morning, after fluctuating between 664 and 690 on Monday and around 680 on Sunday.
In addition, the reproduction rate, or R – which measures how many people each virus carrier infects on average – continued to drop reaching 1.15, the lowest since the beginning of the fourth wave.
This R above 1 indicates that the disease is spreading, but slower than in previous weeks, when it remained between 1.3-1.4, before starting to slowly decrease some two weeks ago.

At the same time, the country now has over 72,000 active cases, up from less than 200 at the beginning of June. At the peak of the third wave in the winter, there were over 88,000. Since the pandemic began early last year, over a million Israelis have been infected by the virus – more than one in ten.

Some 6.63% of those screened on Monday tested positive, marking a record in the fourth wave.
The authorities have also been conducting serological tests on children under the age of 12, who are not eligible for the vaccine, to identify those who had the virus without knowing it and have therefore developed antibodies. Those who are found positive are given a green pass and are not required to isolate if they come into contact with an identified case.
So far, some 55,000 Israeli children have been screened, mostly in the ultra-Orthodox sector, where schools have been opened for over two weeks. Around 17% of them tested positive.
Covid19 Israel covid19 vaccine