About 50% of the airlines have returned to Georgia - PM 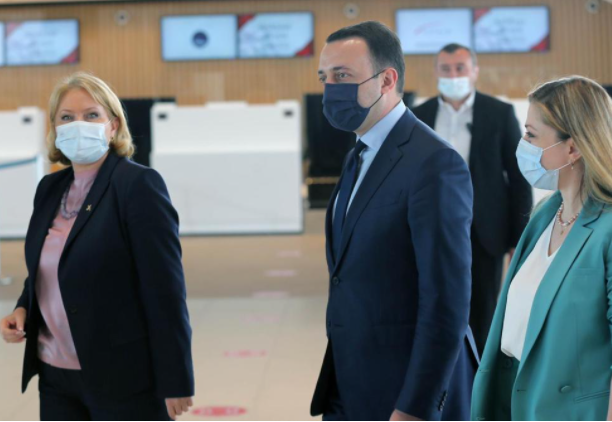 According to the Head of Government, the new terminal meets modern standards, being 6 times the size of the first terminal, allowing for increasing the passenger flow further.

"I congratulate all of you on this day. Today we are opened a new terminal at Kutaisi International Airport, which is very important to our country, especially to Kutaisi. Kutaisi Airport has proved its track record of success since inception. In 2019, Kutaisi Airport was hailed as a fastest growing and developing airport in Europe, holding second place in particular. Consequently, our Government made a decision a few years back to build a new terminal, which, as you can see, meets modern standards, being 6 times the size of the first terminal, allowing for increasing the passenger flow further," Irakli Garibashvili said.

According to the Prime Minister, with air travel back, more than 50% of the airlines have returned to Georgia.

"Our main challenge today is for the country to bounce back from the pandemic fast, to create new jobs, and ensure greater prosperity for our population. Tourism has been one of the key contributors and generators of our country's economic growth and new jobs. Accordingly, the Government is doing everything to ensure that this sector recovers as fast as possible.

Also, air travel has resumed. And about 50% of the airlines have returned to Georgia, with more than 55% of the frequency restored, allowing us to be optimistic about the sector's rapid recovery. Once again, I congratulate you on this day. I congratulate the Director and staff of United Airports, and the Minister of Economy, on the implementation of this very important project," Irakli Garibashvili stated.

Kutaisi Airport, the country's second largest international airport, enjoys an unprecedented 35% annual growth. The airport's new terminal is about 6 times the size of the old terminal, and the two combined take up 30,000 m2. The airport has 7 exits, and its capacity, even in periods of the highest workload, will be more than 25,000 passengers.