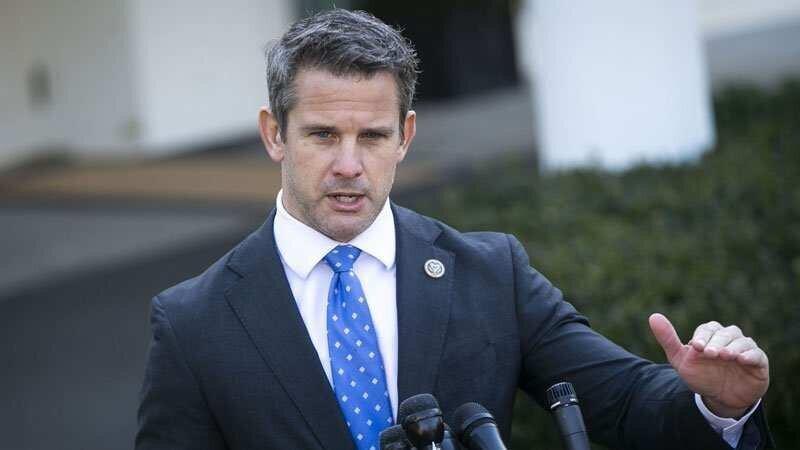 Back
GOP Rep. Adam Kinzinger on Sunday announced a new "movement" to push back on the Republican Party's embrace of former President Donald Trump and retire the "poisonous conspiracies and lies" that defined his administration.
In a six-minute campaign-style video posted to the new "Country First" website, which is funded by Kinzinger's Future First Leadership Political Action Committee, the Illinois Republican asserts: "The Republican Party has lost its way. If we are to lead again, we need to muster the courage to remember who we are."
"We need to remember what we believe and why we believe it," he continued. "Looking in the mirror can be hard, but the time has come to choose what kind of party we will be, and what kind of future we'll fight to bring about."
The effort from Kinzinger marks a notable escalation in his struggle to set a new course for the GOP after four years of the Trump administration. He was one of 10 Republicans who joined all House Democrats in voting to impeach Trump earlier this month for "incitement of insurrection" in light of his role in encouraging the January 6 riot at the US Capitol.
"I did it knowing full well it could very well be terminal to my career," Kinzinger said of his vote during an interview with CNN's David Axelrod on "The Axe Files" podcast. "But I also knew that I couldn't live with myself having, you know, try to just protect it and just felt like the one time I was called to do a really tough duty, I didn't do it."
Concerns over his future within the party aren't without merit. Several House Republicans have hammered Rep. Liz Cheney of Wyoming, the party's third-ranking House leader, calling for her to step down from her leadership position over her vote to impeach Trump. She's also facing a primary challenge from a prominent conservative state legislator.
But turning to the insurrection in his video Sunday, Kinzinger said he "wasn't surprised, because I'd been watching the rhetoric leading up to that day and took it seriously."
"It was a sort of thing that happens in a failed nation or a banana republic -- not the greatest nation the world has ever known, but it did happen right here."
At the end of his video message, Kinzinger asks Republicans to help him "take back our party" and "build up our country."
"It'll mean we have to do some difficult things, but after all, history is highlighted by times like these, and we have yet to fail. We won't fail now. So let's do this together."
Source: CNN
Adam Kinzinger Donald Trump US Politics