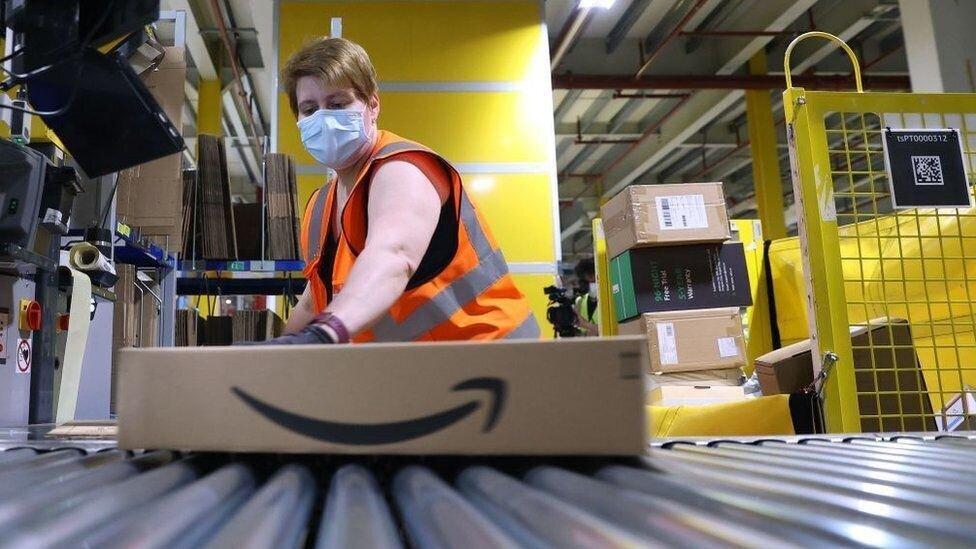 Back
US tech giant Amazon is to go on a hiring spree in the UK as online shopping continues to boom in the pandemic.
Amazon is to hire 10,000 UK employees as it opens more warehouses in the north and south of England.
It is also creating a number of corporate roles in Cambridge, Edinburgh, London and Manchester.

Business Secretary Kwasi Kwarteng said the move was "a huge vote of confidence in the British economy".
The coronavirus pandemic has accelerated a trend towards online shopping, and tech giants such as Amazon have reaped the benefits.

Now the firm, which has previously denied allegations of poor working conditions, is further entrenching its position in the UK.
The addition of 10,000 new roles, including thousands in its warehouses, will take its UK workforce to more than 55,000 by the end of the year.
Amazon said pay for operations roles was £9.70 per hour, or £10.80 in London, with other benefits.
Its profits tripled in the first three months of the year to $8.1bn (£5.76bn), up from $2.5bn a year ago.
The online retail giant will open new "fulfilment" warehouses in Dartford, Gateshead, Hinckley and Swindon, and a "parcel receive" warehouse in Doncaster.
It will recruit in its offices for roles in fashion, digital marketing, engineering, video production, software development, cloud computing, AI and machine learning.
The company will also be recruiting for its Amazon Web Services (AWS) cloud computing business and its operations network.
Mr Kwarteng said Amazon was making a "prime investment in our retail sector", which will "open up a wide range of opportunities for even more workers".
Amazon will also invest £10m over three years into a scheme to train 5,000 employees in subjects including accountancy, HGV driving and software development, in a bid to give them transferable skills.
Amazon will pay 95% of tuition and associated fees for adult education courses, up to £8,000 over four years.

Local chambers of commerce will work with Amazon to identify regional skills shortages.
Shevaun Haviland, director general of the British Chambers of Commerce, said: "Providing staff with training to plug the skills gaps that exist within the local business community is going to be a key driver to increasing productivity and boosting the economy as the UK recovers from the pandemic."
Amazon's UK Country Manager John Boumphrey said: "We're proud of the front-line roles we offer across Amazon, and we also know that they will be a stepping stone for some in their career journey."
Amazon United Kingdom online shopping Employment Employment Rate