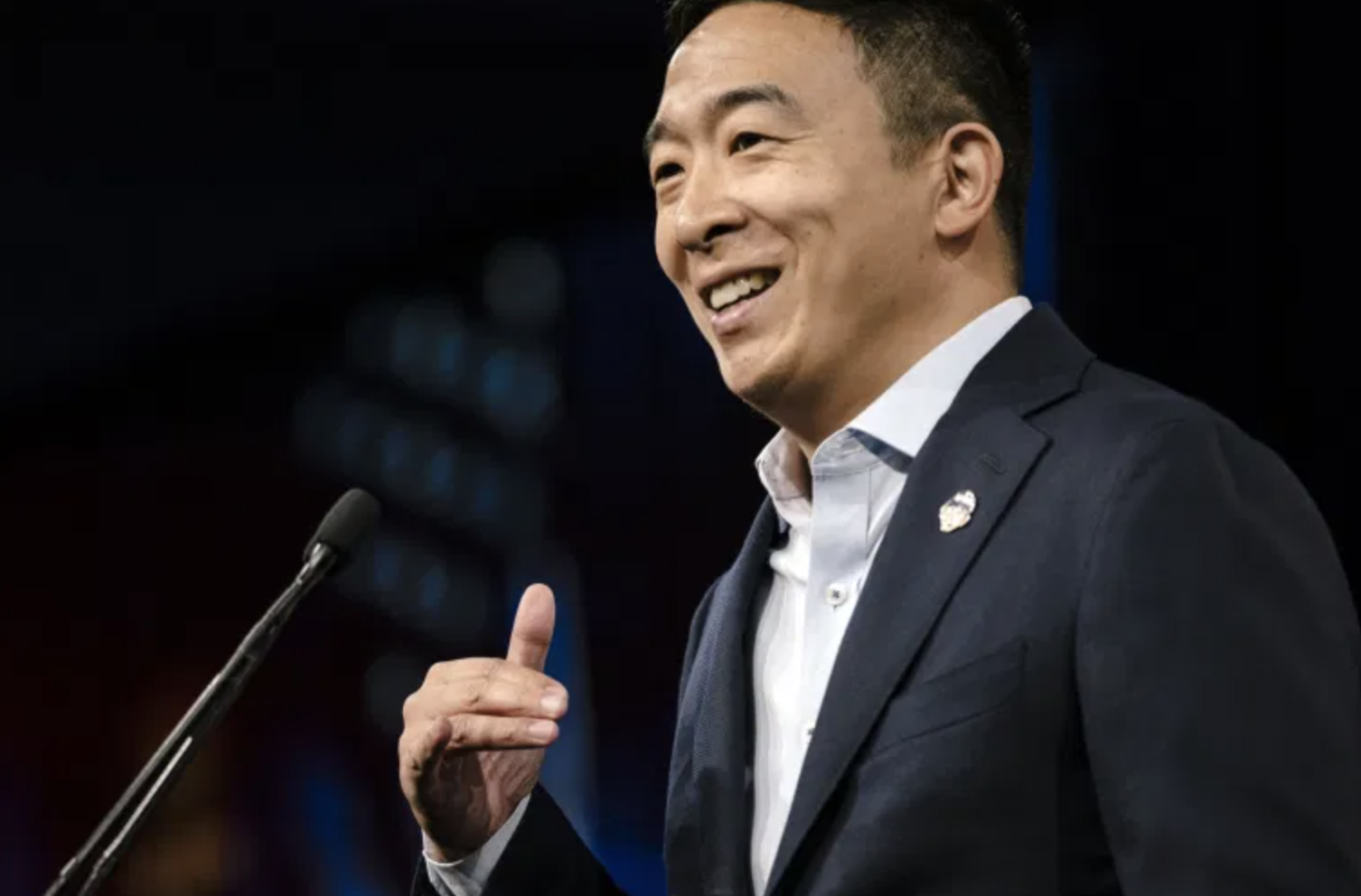 Back
Tech entrepreneur Andrew Yang, a former presidential contender, officially declared his run for New York City mayor.
In a campaign video released late Wednesday on Twitter, Yang put forth an agenda that included a guaranteed minimum income, bringing universal high-speed Internet, starting a “people’s bank” and reopening New York City “intelligently” from the pandemic.
“I moved to New York City 25 years ago,” he said in the video. “I came of age, fell in love, and became a father here. Seeing our city in so much pain breaks my heart.”
His agenda includes a focus on New York City’s nightlife. On his campaign website, Yang pledges to make permanent outdoor dining, “to-go cocktails” and other temporary measures put in place during the pandemic. He also says he wants to attract so-called TikTok hype houses, where social-media influencers live together in big mansions and shoot videos together.
Yang’s basic income program would start by providing $2,000 a year to half a million New Yorkers in extreme poverty. Participants would receive the cash through monthly transfers to a bank account opened in their name at a newly-created “People’s Bank.”
His most detailed policy focuses on reviving the city’s small businesses. He pledged to open 15,000 small businesses by 2022 and also offered a bevy of unconventional ideas, including buying heaters in bulk and then selling them to restaurants that are serving customers in the frigid outdoors as indoor dining remains shut. He also suggested the city make an investment in Cinch Market, a Brooklyn startup that brings together small businesses on one online platform, whose tagline is “Shop Brooklyn Not Bezo$.”
Yang, 46, whose two kids attend public school in the city, also said he wanted to subsidize broadband for schools, expand the city’s universal preschool program, and reform the school system’s admissions process. “There will be no recovery without schools being open and teaching children safely every day,” he said.
Yang had filed paperwork with the city last month to explore a run. He joins more than two dozen people running for the seat, including Ray McGuire, the former vice chairman of Citigroup Inc.; Brooklyn borough president Eric Adams, city Comptroller Scott Stringer and former U.S. Housing Secretary Shaun Donovan. Incumbent Mayor Bill de Blasio is prevented by term limits from running again. Some initial polling shows Yang will start as one of the early frontrunners in the race.
His campaign has already gotten off to a rocky start. Yang drew scrutiny in recent weeks for his decision to flee the city during the pandemic and go to his home in the Hudson Valley, and comments he made about virtual schooling that critics say came across as tone deaf. In an interview with the New York Times, he asked, “Can you imagine trying to have two kids on virtual school in a two-bedroom apartment, and then trying to do work yourself?” His competitors pounced. “Yes, actually I can,” wrote city comptroller and mayoral candidate Scott M. Stringer, about his own two children.
New York’s next mayor will face a number of economic and health challenges. More than 25,000 New Yorkers have died from Covid-19. The city also faces a $3.8 billion deficit for the budget year beginning July, according to state Comptroller Thomas DiNapoli. Through October, New York City has recovered just 37% of the 944,100 jobs lost in March and April, when officials imposed an economic shutdown on non-essential businesses. The election is set to take place in November, with primaries in June.
Born in Schenectady, New York, to immigrants from Taiwan, Yang worked for several startups before becoming chief executive officer of a Manhattan test-preparation company that was sold to Kaplan Inc. in 2009. In 2017, he declared his run for president.
Yang built that campaign on a promise of $1,000 a month to every adult, with a tax on tech companies. He ended his bid in February 2020, but a longer-than-expected run throughout the Democratic primaries brought him a national platform that he used to campaign for President-Elect Joe Biden and Democrats who took control of the Senate.
Source: Aljazeera
United States Andrew Yang