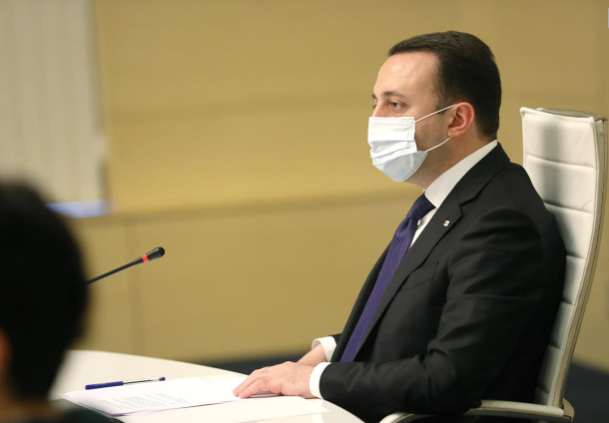 I would like to open today's meeting with very important and positive news. As you know, April's economic growth statistics were published today and prove to be unprecedently high, 44.8%, Georgian Prime Minister Irakli Garibashvili stated at the Cabinet meeting.

According to him, April saw a 44.8% economic growth, that is, almost 45%, which is truly unprecedented and positive.

"In January-April, we had over 8% growth on average, 8.1%, which is good news. In April of 2020, we had a very low drop in Georgia's economy, which is understandable. Of course, we believe that this year's economic growth will be much higher and faster than forecasted previously. During today's Cabinet meeting, the Finance Minister will present projected economic statistics for this year's and medium-term periods. Importantly, the updated indicators look much more promising. Let me cite a few examples. Export in April grew by 70% and remittances are up 144%, and it is very positive that the dynamic of budget revenues is also very convincing and optimistic," Irakli Garibashvili stated.

The Prime Minister, in discussing tourism recovery, also emphasizing that the reopening of land borders tomorrow will be another significant stimulus toward economic recovery.

"We expect rapid tourism recovery. Naturally, the reopening of land borders tomorrow will be another significant stimulus toward our economic recovery. The new fiscal plans presented today also project a 7.1% reduction in the budget deficit. The Finance Minister will discuss this issue in detail. I must also emphasize the role of political stability in economic life. Political stability is also very important to our private sector, for attracting investors. The Eurobonds issued about a month ago with a very low interest rate are yet another illustration of investors' trust. All that is indicative of rapid economic recovery and comes across as great news," the Head of Government underlined.

While discussing April's economic growth indicators, Irakli Garibashvili commended it as a result of the Government's correct policy.

"It is a result of the Government's correct policy and steps taken by us. Extremely positive attitudes are found in business, and very positive expectations, also an important factor. As the Minister pointed out, growth is present in almost every direction, and it is very important, of course. Our task is to promote tourism recovery further. Our latest decision to reopen our land borders also serves the same purpose, and we expect to continue working with this positive dynamic," the Prime Minister concluded.