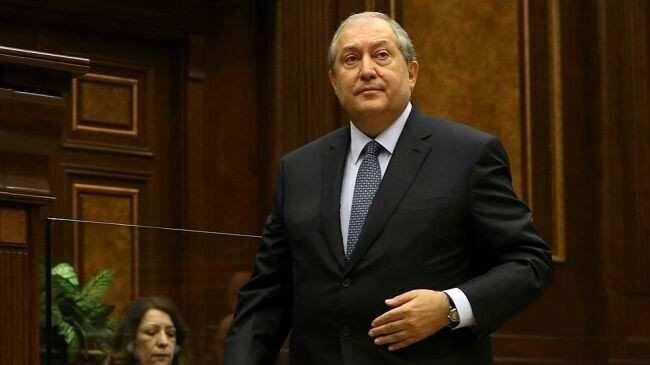 “I learned from the media that a statement on ending the Nagorno-Karabakh war was signed with the presidents of Russia and Azerbaijan. It was also from the media that I learned about the conditions for ending the war. Unfortunately, there were no consultations or discussions with me, as with the President of the Republic, regarding this document, and I did not participate in any negotiations,” Sarkissian said.

According to the reached agreement:

1.A ‘complete ceasefire of all hostilities in the zone of the Nagorno-Karabakh conflict’ started from 00:00 on 10 November. Armenian and Azerbaijani forces are to ‘stop at their positions’.

2.Armenia must hand over Aghdam region and areas under Armenian control in the Gazakh District to Azerbaijan before November 20.

3.On 15 November, Armenia must hand over the Kelbajar region which lies to the northwest of Nagorno-Karabakh, to Azerbaijan.

4.The peacekeeping contingent will remain for a period of five years, with automatic extensions for five year periods if neither Armenia nor Azerbaijan ‘declares six months before the expiration of the period of intention to terminate the application of this provision.

5.To increase control effectiveness, a peacekeeping center will be set up to control the ceasefire.

6.Along the Lachin corridor, a peacekeeping contingent of the Russian Federation will be deployed with 1960 small arms, 90 armored vehicles and 380 units of automobile and special equipment.

7. Internally displaced people and refugees will have the right to return which will be overseen by the UN and transport and economic links in the region will be restored.

8. The peacekeepers will be deployed ‘in parallel with the withdrawal of the Armenian armed forces’.

9. According to the agreement ‘all economic and transport links in the region are to be ‘unblocked’. Armenia will provide a transportation link between Azerbaijan and the Nakhichevan Autonomous Republic in order to ‘organize the unimpeded movement of citizens, vehicles and goods in both directions’.