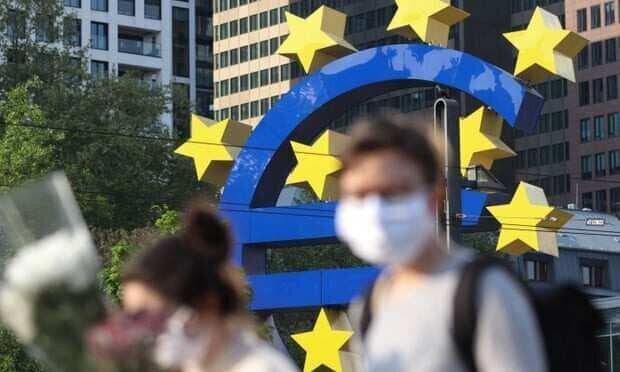 The head of the European Central Bank has warned that the eurozone could be on course for a 15% collapse in output in the second quarter as evidence of the economic toll caused by Covid-19 pandemic started to emerge, with France and Italy falling into recession.

After news that the 19-nation monetary union area had contracted a record 3.8% in the first three months of 2020, Christine Lagarde said much worse was possible in the April to June period, when the impact of lockdown restrictions would be most severe.

“The eurozone economy has contracted at a magnitude and speed unprecedented in peacetime,” said the ECB president, as she announced modest new measures to encourage bank lending and keep financial markets functioning.

The central bank’s forecasts suggest that the eurozone could contract by between 5% and 12% in 2020 as a whole, but policymakers kept most of its ammunition in reserve. Lagarde urged eurozone politicians to cooperate on an ambitious package of spending measures to support economic recovery.

France and Italy, the second and third biggest economies in the monetary union area, fell into recession as the EU’s statistical agency Eurostat reported a bigger fall in gross domestic product in the quarter ending in March than the financial markets had been expecting.

Italy also had its second successive quarter of economic decline, contracting by 4.7% following a 0.3% decline in late 2019. The impact of Covid-19 on an already weak economy was enough to wipe out all the gains in GDP since the global financial crisis of 2008.

Spain, one of the countries most seriously affected by Covid-19, reported a quarterly drop of 5.2%, while Belgian and Austrian GDPs fell by 3.9% and 2.5%, respectively.

Germany did not release its growth figures but the effects of the pandemic on the eurozone’s biggest economy were underlined by a 373,000 increase in unemployment and a jump to 10.1 million workers on reduced hours in April.