The main dilemma for most investors is deciding which bubbles to own and which to avoid.
Bubbly Times
Repeated bond purchases by the Federal Reserve have suppressed interest rates. This distorts the risk-free rate investors use to discount future cash flows. As a result, many assets are inflated.
Seth Klarman, a well-respected hedge fund manager, summed up the situation in a letter cited by the Financial Times. “With so much stimulus being deployed, trying to figure out if the economy is in recession is like trying to assess if you had a fever after you just took a large dose of aspirin,” he wrote. “But as with frogs in water that is slowly being heated to a boil, investors are being conditioned not to recognize the danger.”
Investors like Klarman built careers using fundamental analysis to steer portfolios away from risks and toward opportunities. That playbook may still be prudent, but it’s also out of fashion. Case in point: the average public company’s annual report is downloaded just 28 times right after 10-K filings, according to one academic paper.
Poor fundamental research explains a lot of market oddities. For example, there is suddenly a huge bull market in unprofitable technology stocks. 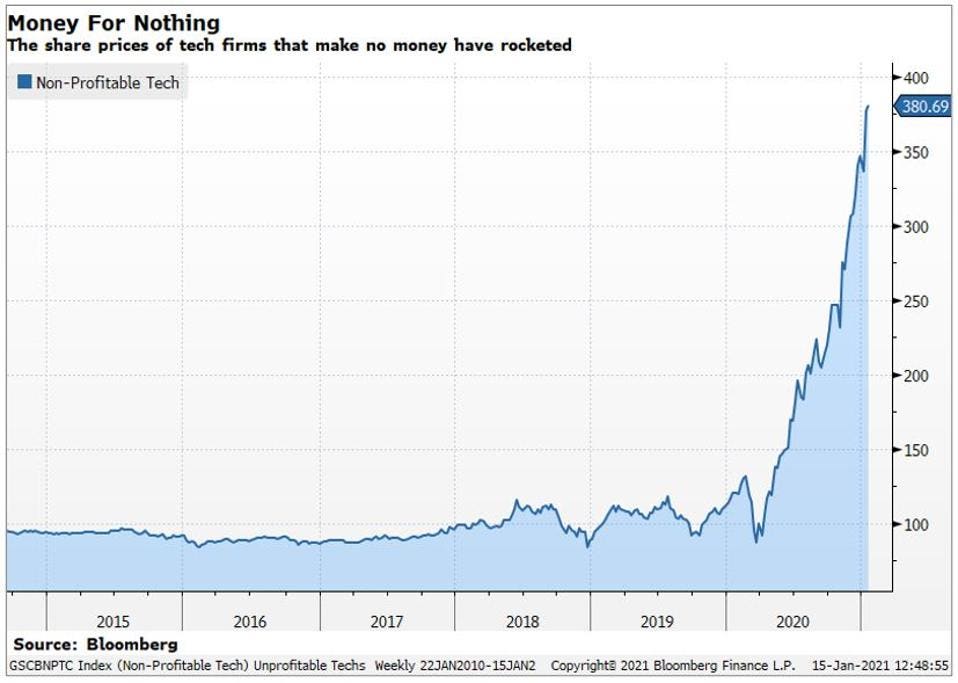 Another factor that Klarman eludes to is monetary policy. It’s no coincidence the bull market in profitless techs started when the Fed dramatically increased its balance sheet. As money supply surges, so do financial assets. 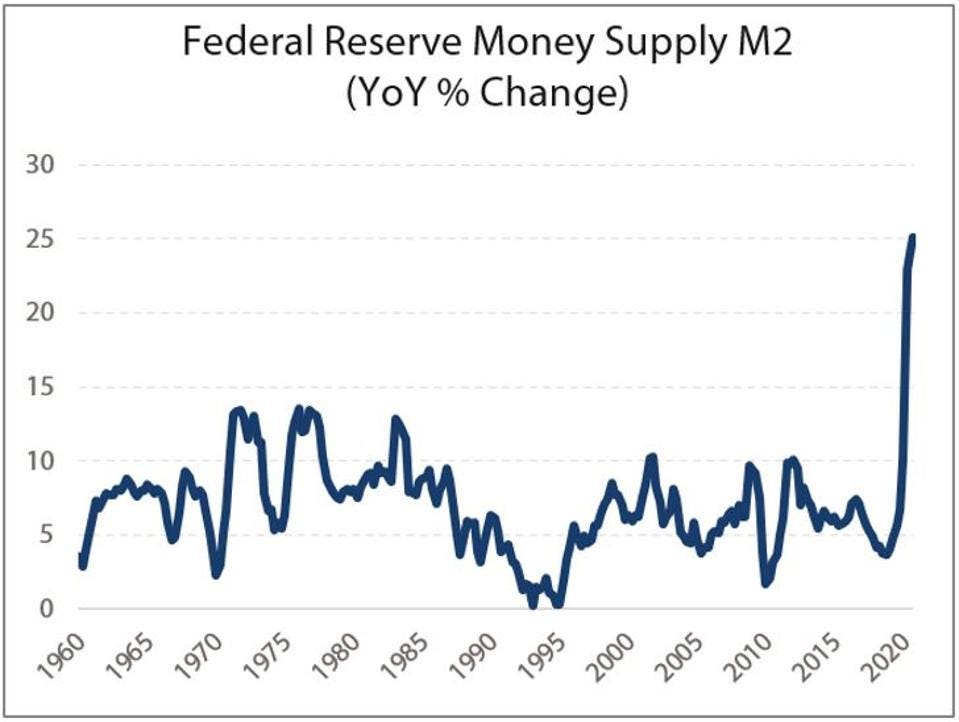 Financial conditions usually tighten during recessions. To paraphrase Warren Buffett, when the tide goes out, we can see who has been swimming naked.
In other words, this is when credit in the economy retracts, bubbles and frauds are exposed, and markets clear.
But that didn’t happen this time around. In this recession (last shaded bar below), the tide went the opposite direction. 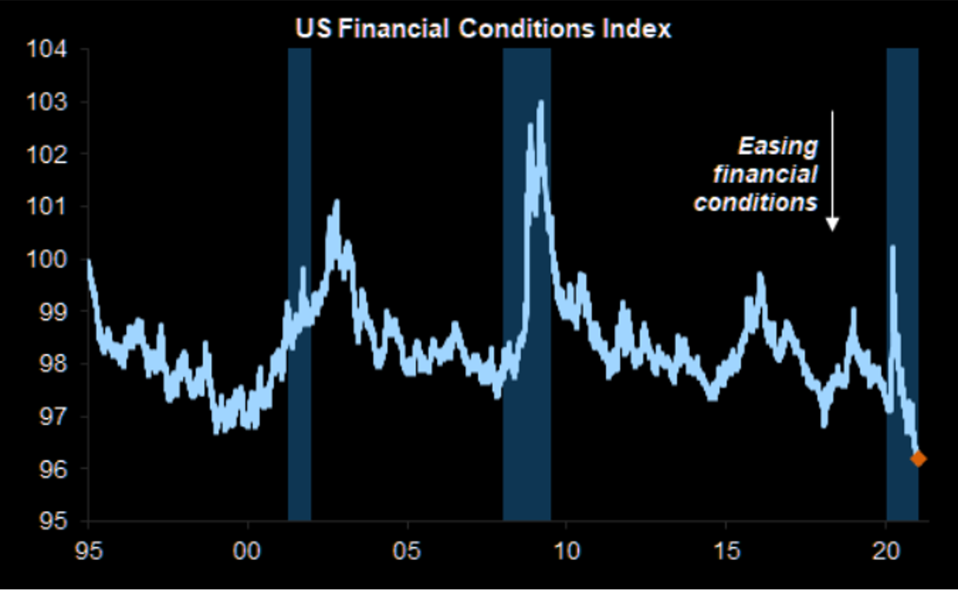 Financial conditions have never been easier. That is all you need to know to rationalize bitcoin’s rise, the SPAC boom, and why just about everything other than cash is going up lately.
Is capital being misallocated? Almost certainly.
Yet, investors still face the question of what to do about it?
Sitting in cash is a tough game to play when that cash is being perpetually devalued. That’s why getting through this “Everything Bubble” will be a tricky affair for us all.
In my view, the ‘best’ bubbles to own in 2021 are those with ample room to expand and reliable fundamental support to cushion against downside risk. As a case study for how to apply this criteria, we can run through a scenario analysis comparing the respective setups for Zoom and Tesla.
Scenario #1: Flows Outweigh Fundamentals
Academic studies are beginning to validate what some investors have known for awhile now. That is: we are living in a ‘Passive Bubble’.
A mix of regulation and clever marketing has convinced millions of people that it is wise to manage their wealth passively. But the passive boom rests on a misguided assumption that an unlimited number of people can passively invest without degrading capital allocation efficiency.
In their paper titled, “Tracking Biased Weights: Asset Pricing Implications of Value-Weighted Indexing,” Hao Jiang, Dimitri Vayanos and Lu Zheng show evidence of price distortions attributed to passive investing.
According to their research, “Flows into funds tracking the S&P 500 index raise disproportionately the prices of large-capitalization stocks in the index relative to the prices of the index’s small stocks.”
Imagine a teacher telling a class it’s okay to copy one another during exams. If the majority of the class stops studying and most students just copy the person sitting next to them, the class will flunk. That metaphor is the simplest way I can think of to describe the long-term hazard of passive investing. If too many do it, capital gets misallocated, the ‘wisdom of the crowd’ is lost, and the economy becomes less productive.
Another key problem is passive investing systematically rewards only price momentum. So by design, this naturally encourages bubbles.

In 2020, Tesla became a posterchild for everything that can go right for a single company in a “flows over fundamentals” market. After a 700% rally, Tesla was added to the S&P 500, which then brought another wave of forced buying estimated at around $85 billion. For more on that, you can read this Forbes post.
As the S&P 500 drama was unfolding, Tesla’s factor profile also got a boost. Specifically, its ‘momentum’ score improved. That helped Tesla become a top holding in a slew of popular ETFs, including the $20 billion ARK Innovation ETF (ARKK) ARKK +0.9%, which is now larger than all other actively managed ETFs combined.

There is a possibility 2021 will continue to be an environment that favors flows over fundamentals. If so, investors want to own stocks with an optimal factor mix to attract fund flows. Under this scenario, Zoom looks better situated than Tesla, because Zoom has more future passive flow potential.
Tesla has already run the gauntlet in terms of attracting fund flows.
Recently, it went from not being in the S&P 500 index at all to becoming the fourth biggest member after Apple, Microsoft and Amazon. And in the ARKK ETF, Tesla is already a concentrated position (9.2% weight). How much bigger can it get before there’s a risk management concern?

In terms of factor exposures, Zoom and Tesla aren’t exactly twins, but they are closely related. Both rank in the top 1% of U.S. stocks for growth and momentum, per Bloomberg data. That means they should attract similar fund flows.
However, in most ETF products, Zoom is a much smaller weight than Tesla. For example, Zoom is currently a 2% weight in ARKK and not yet a member of the S&P 500.
Even though Zoom’s market capitalization is big enough to qualify for the S&P 500, the company is excluded because it has a multi-class share structure, which the S&P committee is not a fan of. If Zoom keeps outperforming, though, there will be pressure to include it—particularly because S&P has already overlooked other dual-class listings, such as Berkshire Hathaway and Facebook.
If and when Zoom is admitted, it may spark a frenzy of pre-buying, like we saw with Tesla. That isn’t something any Zoom investor should bank on happening, but it offers meaningful upside optionality.
Scenario #2: Fundamentals Outweigh Flows
An opposite scenario to consider is: what happens if we return to a fundamentally-oriented market?

Under this scenario, Zoom and Tesla would both probably get dinged for their aggressive valuations. But my guess is the penalty would be less severe for Zoom, because Zoom has better fundamentals to go with its high valuation.
First, even though both companies are ‘hyper growth’ stories, one is growing much faster than the other.
Second, as I described in a prior Forbes article profiling Zoom, the video chat company already boasts a highly profitable business model.
Third, Zoom has a cleaner balance sheet than Tesla.
Finally, Zoom also has a more focused CEO, which is important when trouble invariably hits.
In summary, no one can predict the future. But we can all prepare by positioning our portfolios smartly for multiple potential outcomes. Two key scenarios to consider now are: (i) asset bubbles getting bigger and (ii) asset bubbles popping.
Either way, Zoom looks like a better bubble than Tesla.
Source: Forbes
Tesla Zoom