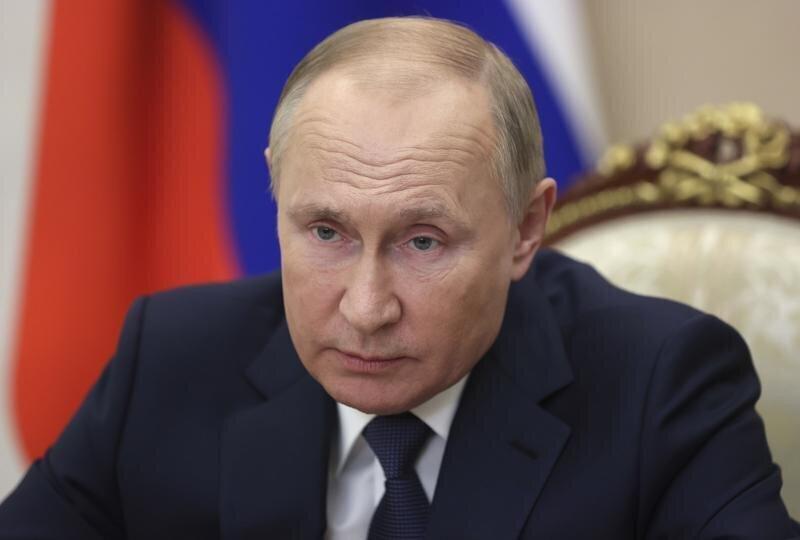 Back
Presidents Joe Biden and Vladimir Putin will speak in a video call Tuesday, the White House and Kremlin said, as tensions between the United States and Russia escalate over a Russian troop buildup on the Ukrainian border that’s seen as a sign of a potential invasion.
Biden will press U.S. concerns about Russian military activities on the border and “reaffirm the United States’ support for the sovereignty and territorial integrity of Ukraine,” White House press secretary Jen Psaki said Saturday, confirming the planned call after first word came from Moscow.
Putin will come to the call with concerns of his own and intends to express Russia’s opposition to any move to admit Ukraine into the NATO military alliance. Kremlin spokesman Dmitry Peskov said “the presidents will decide themselves” how long their talk will last.
The last known call between the leaders was in July, when Biden pressed Putin to rein in Russia-based criminal hacking gangs launching ransomware attacks against the United States. Biden said the U.S. would take any necessary steps to protect critical infrastructure from such attacks.
Ransomware attacks have continued since then, though perhaps none has been as alarming as the one from May that targeted a major fuel pipeline and resulted in days of gas shortages in parts of the U.S.
Russia is more adamant than ever that the U.S. guarantees that Ukraine will not be admitted to the NATO military alliance. But NATO’s secretary-general, Jens Stoltenberg, said this past week that Russia has no say in expansion plans by other countries or the alliance. Numerous former U.S. and NATO diplomats say any such Russian demand to Biden would be a nonstarter.
U.S. intelligence officials, meanwhile, have determined that Russia has massed about 70,000 troops near its border with Ukraine and has begun planning for a possible invasion as soon as early next year, according to a Biden administration official who was not authorized to discuss that finding publicly and spoke on the condition of anonymity.
The risks for Putin of going through with such an invasion would be enormous.
U.S. officials and former American diplomats say while the Russian president is clearly laying the groundwork for a possible invasion, Ukraine’s military is better armed and prepared today than in the past, and that sanctions threatened by the West would do serious damage to the Russian economy.
“What I am doing is putting together what I believe to be, will be, the most comprehensive and meaningful set of initiatives to make it very, very difficult for Mr. Putin to go ahead and do what people are worried he may do,” Biden said Friday.
Ukrainian officials have said Russia could invade next month. Ukraine’s defense minister, Oleksii Reznikov, said the number of Russian troops near Ukraine and in Russia-annexed Crimea is estimated at 94,300, and warned that a “large-scale escalation” is possible in January.
Ukraine’s president, Volodymyr Zelenskyy, recently charged that a group of Russians and Ukrainians planned to attempt a coup in his country and that the plotters tried to enlist the help of Ukraine’s richest man, Rinat Akhmetov.
Russia and Akhmetov have denied that any plot is underway, but the Russians have become more explicit recently in their warnings to Ukraine and the United States.
Biden is also expected to speak with Zelenskyy in the coming week, according to a person close to the Ukrainian leader. This person was not authorized to comment publicly before the announcement of the call and spoke on the condition of anonymity.
The Kremlin said Friday that Putin, during his call with Biden, would seek binding guarantees precluding NATO’s expansion to Ukraine. Biden tried to head off the demand in comments to reporters Friday before leaving for a weekend stay at Camp David.
“I don’t accept anyone’s red line,” Biden said.
Psaki said in a brief statement Saturday that Biden and Putin will discuss a range of topics in the U.S.-Russia relationship, “including strategic stability, cyber, and regional issues.”
She said Friday that the administration would coordinate with European allies if it moved forward with sanctions.
She alluded to Russia’s 2014 annexation of Crimea, the Black Sea peninsula that had been under Ukraine’s control since 1954. Russia has also backed separatists in eastern Ukraine in a 7-year conflict that has cost over 14,000 lives.
“We know what President Putin has done in the past,” Psaki said. “We see that he is putting in place the capacity to take action in short order.”
U.S.-Russia relations have been rocky since Biden took office.
His administration has imposed sanctions against Russian targets and called out Putin for the Kremlin’s interference in U.S. elections, cyberactivity against American companies and the treatment of opposition figure Alexei Navalny, who was poisoned last year and later imprisoned.
When Putin and Biden met in Geneva in June, Biden warned that if Russia crossed certain red lines — including going after major American infrastructure — his administration would respond and “the consequences of that would be devastating.”
Putin Ukraine Biden