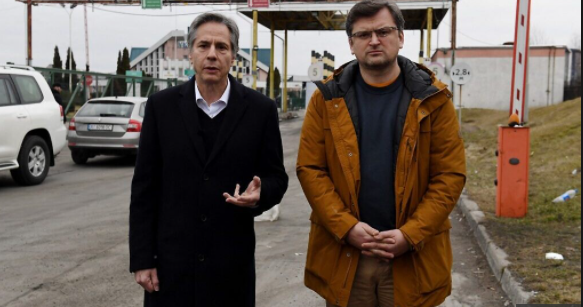 US Secretary of State Antony Blinken has met with his Ukrainian counterpart Dmytro Kuleba on Ukraine’s border with Poland to discuss how to further support Kyiv while isolating Russia as the war entered its tenth day.

US Secretary of State Antony Blinken has declared that the entire world stands with Ukraine, noting the support not only continue, but will increase, including security support, humanitarian support, economic support.

According to Blinken, the pressure on Russia, not only is it unprecedented, not only is it producing very, very concrete results in Russia, but that pressure too will not only continue – it will grow until this war, this war of choice, is brought to an end.

"The entire world stands with Ukraine, just as I am standing here in Ukraine with my friend, my colleague, Dmytro Kuleba, the foreign minister of Ukraine. We’ve seen an extraordinary surgence of support from around the world against Russia’s aggression – against Russia’s war of choice, against what is happening every single day, every single minute in Ukraine to civilians throughout the country as a result of this aggression – but also extraordinary support for Ukraine itself.

We’ve come from several days of meetings with NATO, the European Union, countries beyond the G7, and we see that support not only continue – security support, humanitarian support, economic support – but that support will increase. And as to the pressure on Russia, not only is it unprecedented, not only is it producing very, very concrete results in Russia, but that pressure too will not only continue – it will grow until this war, this war of choice, is brought to an end.

Ukrainian counterpart Dmytro Kuleba noted that hopefully people of Ukraine will be able to see this as a clear manifestation that they have friends who literally stayed – stand by them. The two discussed the provision of weapons to Ukraine and the campaign to isolate Russia internationally and damage its economy with sanctions, Kuleba said. Kyiv will win its war with Russia eventually, he said, but its international supporters need to provide more help to end the conflict sooner.

"We are satisfied with the already-arranged supplies of anti-tank weapons and ammunition – this is one of the most badly needed – and we destroy a lot of Russian tanks and armored vehicles using weapons that came from our friends, including the United States. It’s no secret that the highest demand that we have is in fighting jets, attack aircrafts, and air defense systems. We thank all those countries, including the United States, who provided us the – with Stingers. We effectively use them, and just today we shot down three Russian attack aircrafts, which were bombing our cities, with the use of Stingers. But we need to, how to say, big air defense systems to ensure the safety of our skies. If we lose the skies, there will be much, much more blood on the ground, and that will be the blood of civilians. And I don’t want anyone to share responsibility for their blood, anyone in the world to share responsibility for their deaths and suffering", - Dmytro Kuleba.