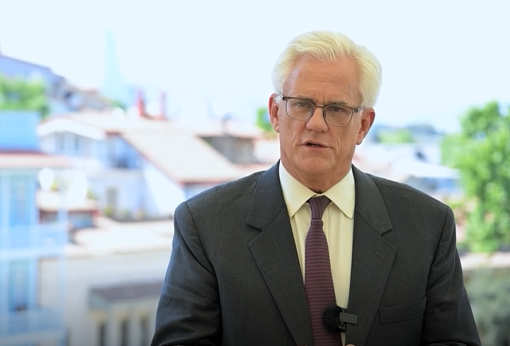 The first auctions for the sale of 14 sanatoriums within the framework of the New Life of Tskhaltubo program were completed yesterday. As a result, two sanatoriums were sold for a total of GEL 8,982,300.

According to Levan Davitashvili, Minister of Economy and Sustainable Development of Georgia, resort of Tskaltubo is being revived not only on a regional, but also on an international scale.

Tskaltubo ia a spa resort in west-central Georgia. It is well-known for its radon-carbonate mineral spring waters and elegant Soviet spas and sanatoriums. The resort's focus has been on balneotherapy. Tskaltubo was especially popular in the Soviet era, attracting thousands of visitors during the whole year. Bathhouse 9 features a frieze of Soviet leader Stalin, and visitors can see the private pool where he bathed on his visits. Following Stalin’s museum in Gori, this place is quite popular among foreigners, especially those who are much interested in Soviet history. Tskaltubo’s 22 sanatoriums and bubbling baths were stopped being crowded after the U.S.S.R.’s collapse and were laid empty.

On July 5, the Georgian government presented the investment project New Life of Tskaltubo. As part of the project, on July 6, the government announced state conditional auctions for 14 projects worth 50 million lari in Tskhaltubo. A total of GEL 500 mln of investments is expected in Tskaltubo. In order to turn it into a world-class balneological resort, the state promises to implement the necessary infrastructure projects.

In Daniell ‘s words, considering Georgia as an investment destination is a very attractive proposition, with the operating environment in the country being significantly improved along with an increase of the gross domestic product per capita.

“This is an extraordinary place. Tskaltubo has an amazing collection of architecture. In addition, the resort is located near the Kutaisi airport, which makes it very convenient. There are many very beautiful buildings with mature architecture, and at the same time, this resort is distinguished by its unique water,” he added.

Daniell also estimated Georgian government, saying it is “capable and provides services to the people and makes it easy for them to find facilities for investment. Old countries like Georgia have gone through many crises and become stronger after each one. I think Georgia has been a very progressive country in the past, it will be very interesting in the future, and this interim period offers great opportunities to buy assets at very reasonable prices. This opportunity will not exist in the future, and right now there is an opportunity for people to invest in Georgia," said Business Consultant.