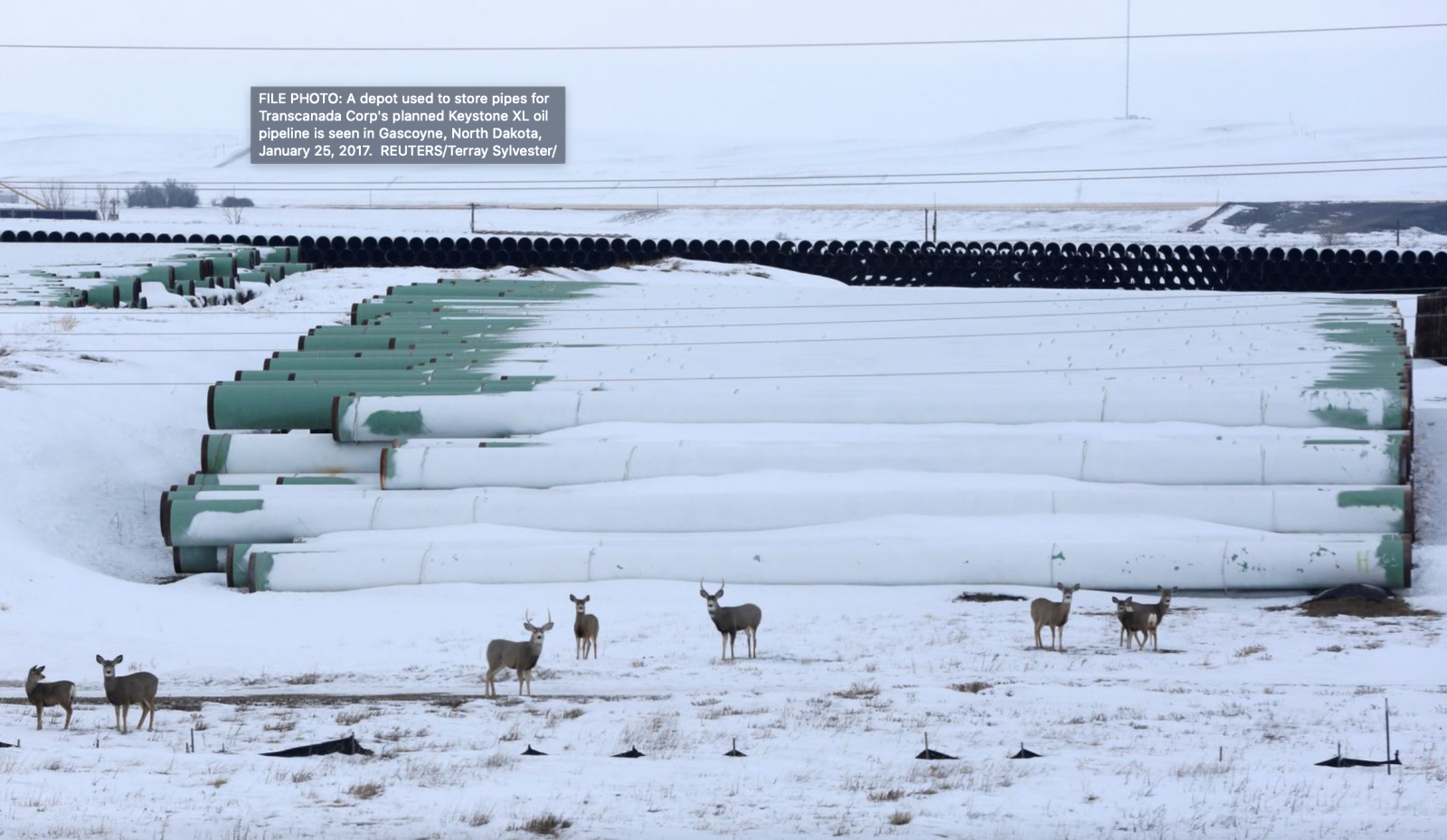 Back
CALGARY, Alberta/OTTAWA (Reuters) - U.S. President-elect Joe Biden’s expected move to cancel the Keystone XL pipeline prompted Canada’s main oil-producing province of Alberta on Monday to threaten to seek damages as Ottawa made efforts to save the troubled project.
Scrapping the project would threaten Canadian jobs and the U.S.-Canadian relationship as Prime Minister Justin Trudeau tries to turn the page on the Donald Trump era, though the idea drew support from environmental groups and progressive U.S. Senator Bernie Sanders.
A source told Reuters on Sunday that Biden will cancel a permit for the $8 billion project over concerns about fossil fuels contributing to climate change, dealing a blow to the Canadian energy sector.
The news sent shares in Keystone XL owner TC Energy lower on Monday and prompted Alberta Premier Jason Kenney to urge Trudeau to reach out to the incoming Biden administration in the next 48 hours. Biden, a Democrat, is due to take the oath of office on Wednesday.

“This is the 11th hour and if this really is the top priority, as it should be, then we need the government of Canada to stand up for Canadian workers, for Canadian jobs, for the Canadian-U.S. relationship, right now,” Kenney told a news conference.
He said Alberta had retained legal counsel and believed there was a “very solid” legal basis to seek damages under international free trade agreements if the pipeline is effectively killed by presidential fiat. Alberta’s financial exposure is just over C$1 billion ($783 million), Kenney said, after the province last year invested in the pipeline, also known as KXL.
KXL is intended to carry 830,000 barrels per day of oil sands crude from Alberta to Nebraska but has run into fierce opposition from U.S.
landowners, Native American tribes and environmentalists. Outgoing Republican President Donald Trump had supported the project.
Diplomats in Ottawa continue to engage with their American counterparts over Keystone XL, two sources close to the Keystone XL file said, and one of them said TC Energy is still lobbying.
“We don’t have a decision from the Biden administration at this point. We should continue to work,” one source said, adding Trudeau had consistently supported the pipeline and would continue to do so. “It’s not over until a decision is public.”
“While there have been reports suggesting a decision is imminent, our sense is very much that it remains possible this could drag out for several weeks,” a second source said.
Trudeau’s government has previously urged the president-elect not to halt construction. Canadian Natural Resources Minister Seamus O’Regan said in a statement on Monday that Canada would continue to push for KXL with the Biden administration.
KXL owner TC Energy said in a statement on Monday that the pipeline squares with Biden’s vision of a cleaner energy future that creates jobs. TC promised on Sunday that KXL would run fully on renewable power by 2030.
The cancellation would be a blow to a group of Canadian First Nations known as Natural Law Energy that planned to invest, said its executive director, Brian Mountain, although he added the group has not yet closed its purchase and there is no financial risk to the First Nations.
KXL was first proposed 12 years ago, when it appeared that Alberta’s oil sands would rapidly outgrow export pipeline capacity. Two other export pipeline projects, the Canadian government-owned Trans Mountain Expansion and Enbridge Inc Line 3 replacement, are proceeding, however, reducing the need for KXL.
TC Energy on Monday closed down 4.5% at C$54.00 in Toronto.

Part of the restrictions to be eased from today