China and Taiwan face off in pineapple war 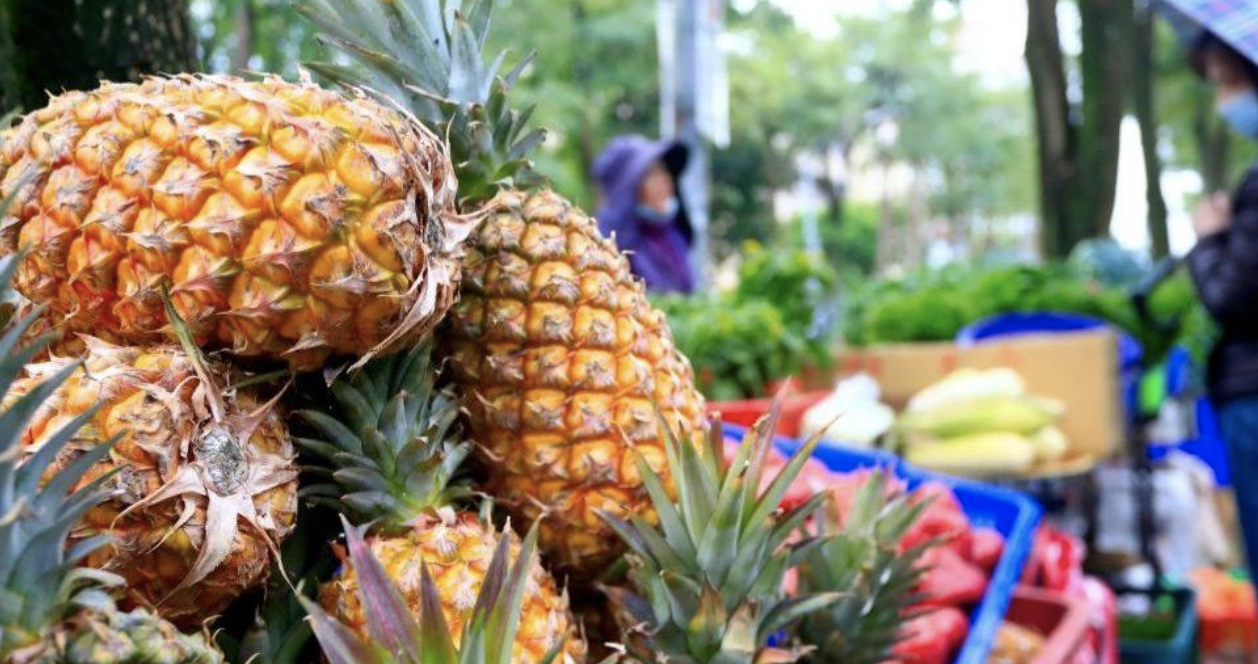 Back
It could be the world’s most heated dispute over pineapple, even eclipsing the interminable debate about whether or not it belongs on pizza.
Last month, China banned Taiwanese pineapple imports, citing the risk of “harmful creatures” that could affect its own crops.
The move infuriated Taiwan’s leaders, who said the move had nothing to do with bugs, and was instead an example of China ramping up political pressure on the island, which Beijing considers a province of China.

In response, Taiwan’s leaders sought out new customers overseas, and asked locals to eat what Chinese consumers no longer could.
“Taiwanese pineapples are stronger than fighter jets. Geopolitical pressures cannot squeeze their deliciousness,” declared Taiwan’s Vice President Lai Ching-te, in a tweet.
According to Taiwan’s Council of Agriculture, the island produces 420,000 tonnes of pineapple annually, and exported a little over 10% of that last year, with almost all of it going to China.
Without mainland sales, Taiwanese growers face a possible glut of pineapples, and with it a danger that prices might fall.
Freedom pineapples
President Tsai Ing-wen launched a “pineapple challenge” on social media, aimed at getting Taiwanese consumers to buy more of the fruit.
Taiwan’s Foreign Minister Joseph Wu used his Ministry’s Twitter account to “urge like-minded friends around the globe to stand with #Taiwan & rally behind the #FreedomPineapple".
The de facto embassies of the US and Canada in Taiwan were happy to oblige.
The American Institute in Taiwan posted a number of pictures to its Facebook page, including one of its director Brent Christensen with three pineapples on his desk.
The Canadian Trade Office in Taipei posted a photo of staff posing around a pineapple pizza, with a polite reminder that it was Canada’s idea rather than Hawaii’s.
“We in the Canadian Office like pineapple pizza, especially pineapples from Taiwan!” the post said.
Japanese consumers might have made the biggest difference, with orders for 5,000 tonnes coming from Japan, Ms Tsai said.
Many Japanese Twitter users also expressed their support.

“I will definitely buy some. I tried it last year and realized that even its core is eatable. Now I love its juicy sweet taste,” one user wrote.
Within just a few days the Taiwanese government’s campaign led to enough orders to cover the pineapples that would have been exported to China.
That still leaves the 90% of pineapples growers usually sell domestically, so they will be hoping that consumers don’t get sick of the taste.

Yang Yufan, a well-known organic pineapple grower from Southern Taiwan, has become known as the "pineapple prince".
He told BBC Chinese that in recent years Taiwanese growers had gravitated to the Chinese market, because inspections were easier and faster than in other markets like Japan.
But he said Taiwan's agriculture sector needed to diversify because too much of its exports go to mainland China.
"The pineapples we hope to harvest next year will [have been] sown last year, so the problems we will face next year may be even greater," he said.
Foreign pests and diseases
China insists the pineapples were blocked because its customs authorities had repeatedly detected pests on fruit coming from Taiwan.
Ma Xiaoguang, spokesman for the Taiwan Affairs Office of the State Council, described it as a normal biosafety precaution measure.
However, over the past 12 months China has been accused of using ambiguous and opaque trade policies to punish its rivals.
Australian agricultural producers in particular worry that their products have been subject to unofficial bans or unreasonable new standards, as retribution for Australian government policies.
Ms Tsai flatly dismisses China’s claims, pointing out that 99.97% of imported pineapple batches passed inspection.
Biosecurity is an unusually tricky area, because introduced species can cause real economic damage, but there is a long history of using it as a weapon in trade disputes.
“Some of these concerns are genuinely driven by legitimate worries over the possible introduction of foreign pests and diseases against which most native species may have no defences at all,” said Deborah Elms from the Asian Trade Centre.
“But rules over what are called sanitary and phytosanitary (SPS) issues can also be a fairly easy way to block foreign trade.”
The United Nations Conference on Trade and Development’s (Unctad) database shows that China has 1,642 SPS restrictions, which is more than any country except for India, the US, Panama and Peru.
But those numbers should be treated with caution, said Ms Elms, as they are not qualitative. One poorly framed rule might be more restrictive than dozens of less onerous restrictions.
Source: BBC
China Taiwan