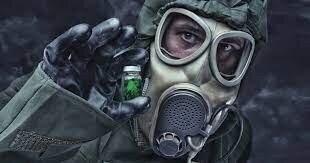 China has joined Russian propaganda efforts in promoting a conspiracy theory that the United States has funded the development of biological weapons in Ukraine.

Zhao was referring to a report Monday by China's state broadcaster CCTV, which cited allegations by a Russian Defense Ministry spokesman that Washington had funded the development of biological weapons in Ukrainian labs.

"The Russian military operation that uncovered secrets about US laboratories in Ukraine is not something to be brushed off by saying it’s so-called propaganda and so-called ridiculous," Zhao said Thursday.

Some background: A CNN analysis on Thursday found state-run news outlets in China — which dominate the country's highly censored media space — have largely echoed Russian state media or information from Russian officials about the invasion of Ukraine.

In a series of tweets this week, Psaki slammed the biological weapons claims, noting the US had also seen Chinese officials "echo these conspiracy theories."

"Now that Russia has made these false claims, and China has seemingly endorsed this propaganda, we should all be on the lookout for Russia to possibly use chemical or biological weapons in Ukraine, or to create a false flag operation using them. It’s a clear pattern,” she said.

Psaki also noted Russia’s “long and well-documented track record of using chemical weapons” as well as its pattern of “accusing the West of the very violations that Russia itself is perpetrating.”

Ukraine labs: Following the breakup of the Soviet Union, US-funded biolabs were established in Ukraine — partly to secure old weapons left behind in the former Soviet republics. The State Department has described the claims as nonsense — and the US and Ukrainian governments have repeatedly, and for years now, tried to bat down conspiracy theories about the labs and spoken about the work that is actually being done in them.

Russia's claims discussed at the UN: The United Nations Security Council will hold a meeting Friday at the request of Russia about the allegation the US is developing chemical weapons in Ukraine. The US' UN Mission spokeswoman Olivia Dalton said the move was "exactly the kind of false flag effort we have warned Russia might initiate to justify a biological or chemical weapons attack."