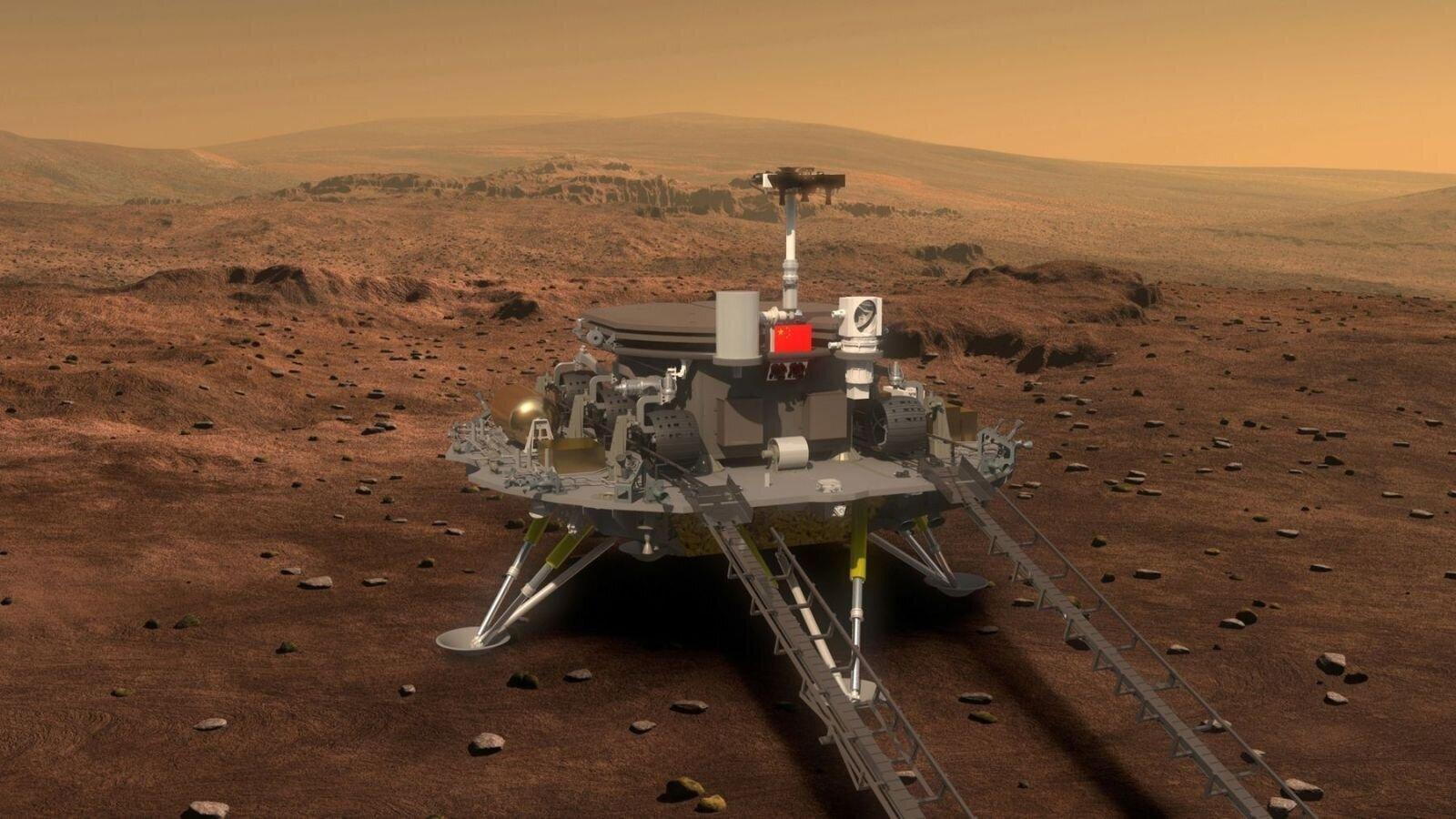 Back
A Chinese spacecraft has landed on Mars, making China only the second country after the U.S. to send a rover to the surface of the Red Planet.
A China National Space Administration (CNSA) lander from the Tianwen-1, which has been in orbit since February, touched down on Utopia Planitia, a large plain in the northern hemisphere of Mars on Saturday at about 7 a.m. local time, according to reports by state media CCTV.
The lander was carrying the Zhurong rover, named after an ancient Chinese god of fire, which will explore the surface near the landing site.

“The Tianwen-1 mission has achieved China’s first landing on another planet, and is a milestone with great significance in China’s development of space and aviation,” according to CCTV.
NASA’s Viking 2 visited Utopia Planitia in 1976, a few months after its twin, Viking 1, made history as the first probe to land safely on the planet.
The U.S. space agency has sent several missions since then and its latest, the Perseverance rover, has been on the surface since February 18. On April 19, the U.S. space program became the first to fly an aircraft, the Ingenuity helicopter, on another planet.
The Mars rover could provide a public-relations boost to President Xi Jinping’s government following the crash of debris from a Chinese rocket in early May that raised alarms worldwide about the secrecy of the country’s space program.
“The Zhurong Mars rover is hoped to ignite the spark of China’s interplanetary exploration and guide humanity deep into the vast yet unknown outer space,” CNSA said last month.
While lagging NASA’s landings by more than four decades, China’s Mars success shows the country’s space engineers are quickly closing the gap with their U.S. counterparts.
“It’s the most difficult place in the solar system to land,” said Emily Lakdawalla, author of “The Design and Engineering of Curiosity,” about the NASA rover that landed in 2012. China’s success on its first attempt “tells you that they are one of the most capable space agencies,” she said.
When landing on the moon, spacecraft can use rockets to slow their descent as they approach the lunar surface. That’s possible because the moon doesn’t have an atmosphere. For returns to Earth, spacecraft reentering the atmosphere can deploy parachutes to glide slowly down through the air.
Unlike the moon, Mars has an atmosphere, which makes it difficult to use rockets to decelerate. However, the Martian atmosphere is much thinner than Earth’s, making it harder to rely on parachutes.
Touching down on Mars requires a huge deceleration in a very short time, said Nilton Renno, professor of climate and space sciences and engineering at the University of Michigan.
“You’re going 20,000 miles per hour,” he said, “and in seven minutes you are on the surface at rest if everything goes successfully.”
CNSA’s plan to address this challenge involved using the lander’s “aerodynamic shape, parachute and retrorocket to decelerate and buffer legs to touch down,” Chinese state media reported on April 24.
The European Space Agency tried to land on Mars in 2003, when its Beagle 2 probe crashed. Its ExoMars Schiaparelli spacecraft crashed in 2016 after software incorrectly estimated its altitude during an attempted landing.
The Soviet Union made several attempts in the 1970s and its Mars 3 probe reached the surface in 1971 but only transmitted back to Earth for less than a minute before going silent.
Now that the Chinese rover has reached the surface, Zhurong will begin exploring. It will need to work fast: The rover, which weighs 240 kilograms, can last three Martian months, about 92 days on Earth.
China NASA Mars Spacecraft China National Space Administration European Space Agency