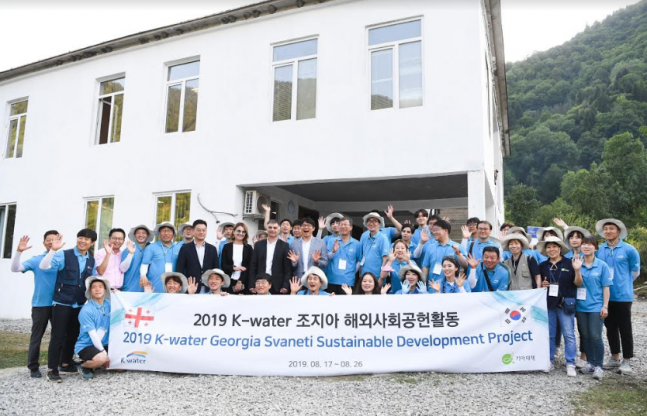 In the times of coronavirus pandemic, the work of local ambulatory clinics in the regions has become even more vital, which is still a problem in many villages. In this regard, after August last year, the situation has improved completely in the village of Chuberi, Mestia Municipality, where the ambulatory clinic was fully rehabilitated with the funding of JSC Nenskra Hydro and Korean Water Resources Corporation K-water.

As part of the rehabilitation, the second floor of the building was completely renovated, the day and the so-called luxury rooms with bathrooms were arranged, as well as a family doctor's reception, patient examination rooms and conference hall.

Family doctor Tea Tsindeliani, who has been working at the Chuberi Ambulatory Clinic for 5 years, says that after the rehabilitation, the working conditions of the doctors have significantly improved and, consequently, the work has become more efficient.

"The building where the ambulatory clinic operates today was an ordinary residential house 7 years ago. The village bought it and turned it into an ambulatory clinic, but due to lack of finances only the first floor was arranged, and the second floor was completely useless. No one had funds to repair it. After renovation works, the second floor was repaired. The full-scale hospital rooms with bathrooms, reception of family doctors and separate examination rooms were arranged which makes easier to work and manage the flow of patients effectively, " said Tea Tsindeliani.

Considering background of a new global challenge, ambulatory doctors serve patients in a remote way to prevent the spread of coronavirus, and treat at the hospital only in case of emergency. It also became necessary to take care of the safety of the medical staff. According to Tea Tsindeliani, the ambulatory clinic is regularly disinfected with the help of "Nenskra Hydro".

"Because of the spread of the virus in the country, we mostly serve patients remotely, provide telephone counseling and only treat patients at the site in case of emergency. Disinfection at the ambulatory clinic has already been done with the help of Nenskra Hydro. "We have a request: if there is a resource for this, to provide us with disinfectants," said the family doctor.

Mariam Kopaleishvili, an ambulance doctor, who was directly involved in the rehabilitation of the Chuberi Ambulatory Clinic, said that the appropriate equipment of the center is an important aid for both patients and doctors.

"Apart from providing patients with much better medical care and treatment in modern rooms, rehabilitation has certainly made work easier for doctors. The process of working with patients has become easier and more comfortable," said the ambulance doctor.

According to the doctor, currently the calls related to the symptoms of coronavirus in Chuberi are not actually recorded, the referral is mostly related to cases of arterial hypertension and trauma during spring works.

"Currently, there is no ambulance car on the balance of Chuberi Ambulatory Clinic, however, it is quite a long way to some villages in the valley to get to the patient operatively. In this case, "Nenskra Hydro" often helps doctors with their ambulance car, " said the ambulance doctor .

From 2015 to date, Nenksra Hydro has implemented social projects worth GEL 2 million in Chuberi and Nakra. Within the scope of Access to Mechanization Project, the company provided about 200 families with free heavy machinery service, assisted them in improvement of lands and arrangement of internal village roads. In addition, Nenskra Hydro funded Nakra riverbed cleaning and bank reinforcement works. Recently, the full rehabilitation of the Chuberi Culture House and Sports Complex has been completed.

In addition to infrastructure projects, the company is working to develop small and medium-sized businesses as well as support vocational education.

Georgian citizens to get legal jobs in Israel

Georgia: Statement by the Spokesperson on the selection process of Supreme Court judges - EU