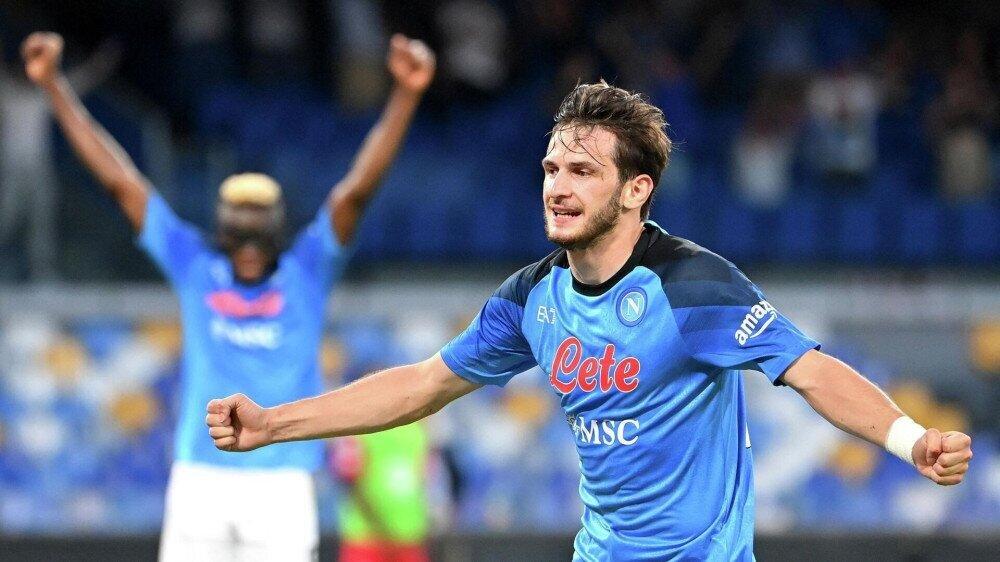 Napoli has always had an infatuation with talismanic attacking players.

In recent years, there have been Dries Mertens and Lorenzo Insigne. A few years prior were Marek Hamsik and Ezequiel Lavezzi. But none have been more famous – or loved by Napoli fans – than Diego Maradona.

The Argentine became the symbol of Neapolitan flare and brashness during his seven seasons in the south of Italy, scoring goals and winning titles.

Despite leaving the club in 1991, Maradona’s presence still looms large over the club and ‘El Pibe de Oro’ is the standard-bearer for diminutive, tricky, attacking players who come to the club.

So to be compared to Maradona by Napoli’s fans comes with the hope that with it will bring the success the Argentine brought with him. Many players have come and gone – having been anointed Maradona’s successor – but a third Serie A title has remained elusive.

Then, in July, a scruffy, unheralded Georgian winger rocked up at Napoli.

Fast forward to November and despite arriving without much fanfare, Khvicha Kvaratskhelia is already being compared to Maradona. He’s been dubbed affectionately “Kvaradona” after a lightning start to life in Italy; one which has him linked to moves to huge clubs around Europe and has gripped the football-mad city.

Edo Badalashvili, a football journalist from Georgia, visited Naples in September to watch Kvaratskhelia – also known as ‘Kvara’ – play against his beloved Liverpool in the Champions League.

Although Kvaratskhelia didn’t score, he tormented the Liverpool defense in a comfortable 4-1 victory for Napoli, and he remembers the outpouring of love his countryman received from the club’s fans.

“Our Georgian immigrants who live in Napoli say that, as Georgians, we are given pizza there because of Kvara,” Badalashvili told CNN Sport. “In the city of Maradona, everyone loves Kvara. They wear his t-shirts.

“When they found out that I’m from Georgia, everyone received me well, took photos and chanted ‘Khvicha, Khvicha.’ True, it is still difficult for them to pronounce the name correctly. I don’t know how Kvara could do it in such a short period.

“But, believe me, in Napoli they already love him very much and he is the first player from this team there.

“I have a video of Napoli fans chanting the names of the players before the game against Liverpool. The name they chanted the loudest was Kvaratskhelia.”

For a boy from Tbilisi, Kvaratskhelia had big boots to fill.

Two stalwarts of the Napoli team – Naples-born Insigne and the club’s all-time leading goal-scorer Mertens – left in the summer for new pastures after long stints with the club.

And so, Napoli looked for replacements on the wing. To the surprise of many, they turned to a previously unfamiliar player to many European football fans, signing Kvaratskhelia from Dinamo Batumi in Georgia for around €15 million ($14.8 million).

Given the hole Kvaratskhelia was theoretically filling and being the club’s primary attacking signing in the summer, questions were asked of Napoli’s sporting directors if they had done enough.

“You sort of are thinking: ‘Well, when I think of Mertens and Insigne, it doesn’t add up that a 21-year-old Georgian guy for a relatively low fee coming directly from the Georgian League as well,” Italian football journalist for Total Italian Football, Euan Burns, told CNN Sport.

“It would be more common for there to be a sort of a stepping stone in, say, the Netherlands for argument’s sake, before moving to a league like Serie A.

“And that didn’t happen. So you think: ‘Surely, this guy can’t plug that gap in this Napoli team.’”

But wearing the No. 77 shirt, Kvaratskhelia has done much more than that.

As part of Napoli manager Luciano Spalletti’s new fast-paced, lung-busting team, the 21-year-old Georgian has been a vital driving force down the left-hand side, providing goals and assists as he’s taken Serie A and the Champions League by storm and made Napoli one of Europe’s most exciting teams. His contributions have helped the club on its current 16-match unbeaten run in Serie A.

In 16 appearances, he’s scored eight goals and picked up eight assists. His real coming out party was when he terrorized the Liverpool defense in Napoli’s demolishing of last season’s Champions League finalist in Naples.

When asked to recall a player having such an immediate impact in Italy, Burns struggled to do so, comparing the variety in Kvaratskhelia’s style of play to that of Manchester City striker Erling Haaland.

“The thing that’s interesting about Haaland is that, despite the size of him, he’s got every element of being a striker in the sense that he can run a long way with the ball at pace,” Burns said. “Also he can shoot from distance, he can get headed goals.

“And to me, Kvaratskhelia feels almost like a winger version of that, where he’s not ridiculously tall, but he’s already scored at least one header. He’s frighteningly quick with or without the ball.

“He’s got incredible feet, but also he’s very strong and I think that’s what sets him apart from a player like Insigne who is incredible with the ball at his feet and can shoot from anywhere, but he wasn’t a particularly strong player; he could get shrugged off the ball by people.

“But Kvaratskhelia is shrugging defenders off the ball.”

According to Badalashvili, the reciprocated love Kvaratskhelia and the Napoli fans have for one another is what jumps out to him most.

“Napoli was the first team when he kissed the badge after scoring a goal,” said Badalashvili – who says he remembers watching Kvaratskhelia play at Dinamo Tbilisi, Rustavi, Lokomotiv Moscow and Rubin Kazan.

“After a goal, he kissed the badge and, for us, it’s many things. He answers a lot with this. He loves Napoli, he is grateful to Napoli and Napoli loves him.

“I can say that Kvara is [the] next legend. His surname is already ‘Kvaradona.’ Napoli fans gave him the nickname ‘Kvaradona.’ And when I spoke with Napoli fans, they said when they see Kvara, they see Maradona.”

Ever since he made his debut as a 17-year-old for Georgia’s biggest football team – Dinamo Tbilisi – Kvaratskhelia’s future as the country’s totemic player was written. But his rise to prominence took a circuitous route, leaving Dinamo Tbilisi to join fellow Georgian side, Rustavi, a year later in the search of playing time.

Kvaratskhelia was named in the Guardian’s 2018 article highlighting the 60 best young footballers in the world, as well as going on loan to Lokomotiv Moscow in Russia to broaden his horizons during the second half of the 2018/19 season.

And it was in Russia where Kvaratskhelia really made his mark, eventually signing permanently for Rubin Kazan.

Badalashvili remembers then-Lokomotiv Moscow manager Yury Syomin being “really disappointed” the club weren’t able to hold onto Kvaratskhelia, such was his promise.

During his two-and-a-half seasons in Kazan, Kvaratskhelia established himself as a first team regular, as well as a mainstay in the Georgian national side.

Although he was blossoming into a star on the pitch, he faced criticism from back home.

However, while some posed that Kvaratskhelia should speak more openly on the topic, he chose not to do so, saying, as a footballer, it is not his business to talk about politics.

Upon the outbreak of Russia’s invasion of Ukraine and FIFA’s announcement that foreign players in Russia could suspend their contracts, Kvaratskhelia left Kazan, returning to Georgia to play for Dinamo Batumi.

During a goal-ridden spell in just a few short months at the club, Kvaratskhelia earned his move to Napoli.

Between his arrival in Italy and his international teammate Giorgi Mamardashvili’s transfer to La Liga side Valencia, Badalashvili believes they have opened doors which have been previously closed to Georgian footballers.

“Our players could not go to Europe,” he said. “We need a lot more talented players, not only Kvara or Mamardashvili.

“We have other players, but they cannot go to Europe. We need this. And we need to bring hope, with Kvara and Mamardashvili.”

With a combination of Kvaratskhelia and the rest of Napoli’s attacking threats, the team currently sits atop the Serie A table – with a five-point lead over second-place Atalanta – and has qualified for the knockout stage of the Champions League with a game to spare.

The surprise with which he has burst onto the scene, impressing with his unorthodox style and all-around game with the ball, hints that he is destined for bigger things than Napoli – Badalashvili, for one, hopes he chooses Liverpool.

But, despite only being in his formative footballing years, Kvaratskhelia’s reputation back in Georgia is already cemented. When he returns to his home country, he is now received as a hero.

“(The Georgian national) team not lost in 11 matches. People have a new hope that we will be able to qualify for Euro 2024 or a World Cup. Today, Georgia lives with football and, today, we are a football country. And when you go to the city, you will see this. Kvara changed life in Georgia.”