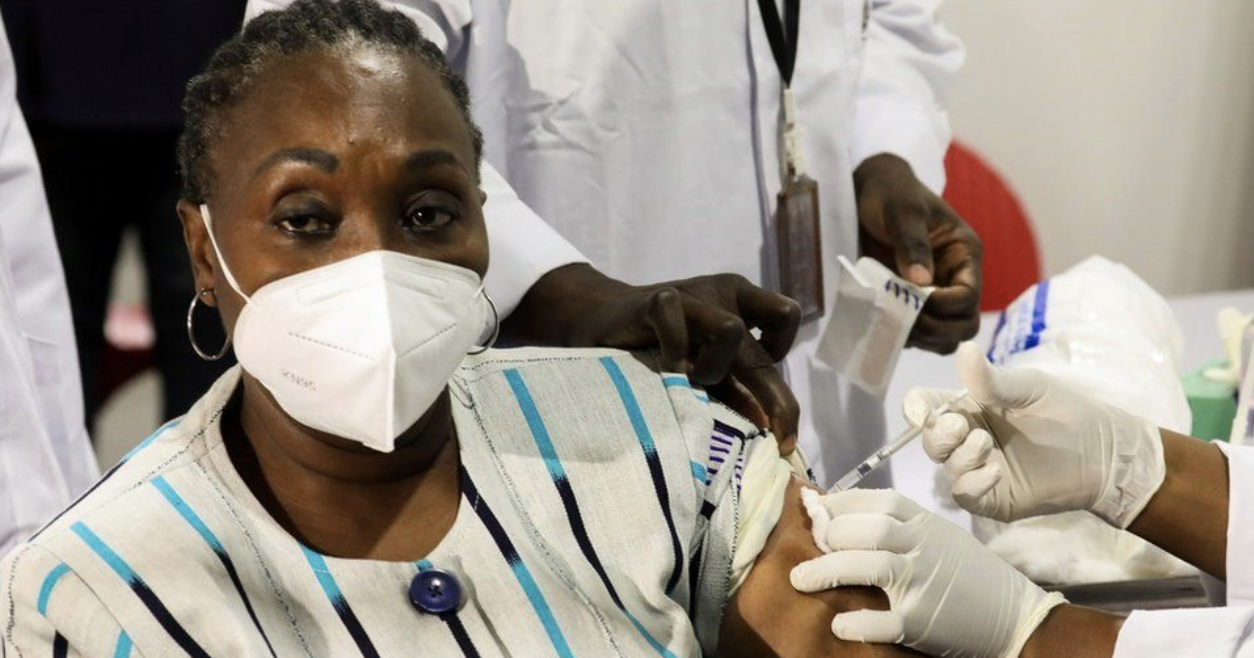 Back
African countries are starting mass Covid inoculation drives using vaccines supplied through a scheme set up to share doses fairly with poorer nations.
Ivory Coast is one of the first to benefit from the UN-backed Covax distribution initiative, with injections beginning on Monday.
Ghana is also launching its vaccination drive this week.
Ghana's President Nana Akufo-Addo on Monday became the first to receive a coronavirus vaccine through the scheme.
Mr Akufo-Addo urged people to get inoculated and not to believe conspiracy theories casting doubt on the programme, which will see some 600,000 doses of the Oxford-AstraZeneca vaccine rolled out nationwide on Tuesday.
"It's important that I set the example that this vaccine is safe by being the first to have it, so that everybody in Ghana can feel comfortable about taking this vaccine," he said.
The rollout will initially focus on the most vulnerable - those aged over 60 or with serious underlying health issues - and essential workers, such as medical professionals, teachers, police and even some journalists.

But pregnant women and those under the age of 18 are not part of the vaccination campaign. Authorities have said they do not have enough data on the possible side effects of the vaccines on such groups.
A message of assurance
By Thomas Naadi, BBC News, in Ghana
Nana Akufo Addo and his wife were vaccinated in a ceremony broadcast live on television to encourage other Ghanaians to get their jabs.
Some Ghanaians have expressed misgivings about the safety of the vaccines. While some believe it is a ploy by the government to reduce the country's population by making them infertile, others think the vaccines might be fake.
In a televised address to the nation on Sunday, the president stressed that the vaccines had been declared safe by the country's Food and Drugs Authority (FDA), and there was no reason to doubt their safety.
"Taking the vaccines will not alter your DNA, it will not embed a tracking device in your body, neither will it cause infertility in women or men," he assured.
Ghana's FDA has also approved Russia's Sputnik V vaccines for emergency use, and the certification process is ongoing for other vaccines.
The country is also exploring the possibility of getting some local manufacturers the needed licence to produce some of the existing vaccines, while Ghanaian scientists are working with their counterparts on the continent to develop a vaccine.
In Ivory Coast, which has a similar rollout programme, people began to queue at vaccination centres early on Monday for their first dose of the Oxford-AstraZeneca vaccine.
Nigeria is due to take delivery of nearly four million doses of vaccine later this week.
Prof Gavin Yamey, who was involved in setting up the Covax programme, said there was a "huge need" to distribute vaccines worldwide.
"It has been rather depressing watching rich nations essentially just clear the shelves," he said, adding: "It's been absolutely a kind of me first, me only vaccine grab, and that's not just incredibly unfair, it's also terrible public health."
Vaccination programmes have been slow to get off the ground in Africa, but the continent has reported relatively few cases and deaths in comparison with many western countries.
The Covax scheme hopes to deliver more than two billion doses to people in 190 countries in less than a year.
The scheme is led by the World Health Organization (WHO) and also involves the Global Vaccine Alliance (Gavi) and the Coalition for Epidemic Preparedness Innovations (Cepi).
Source: BBC
Covid19 covid19 vaccine Ghana Ivory Coast