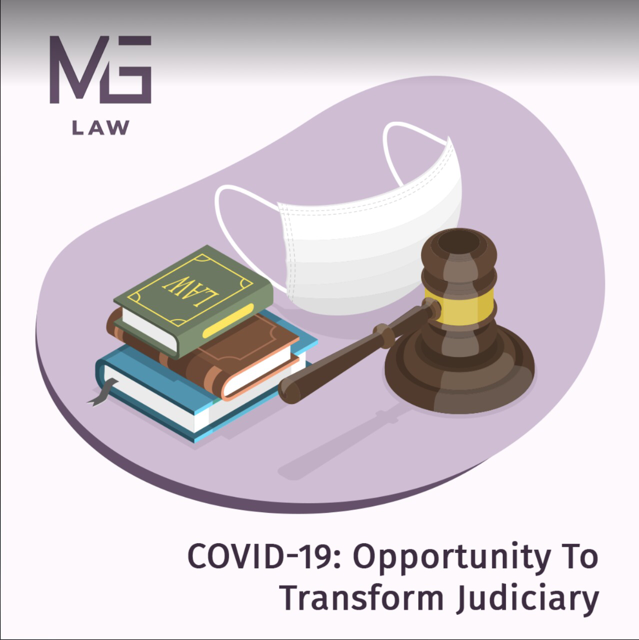 MG Law Office, through the contribution of partners Archil Giorgadze and Nicola Mariani, joined by senior associates Ana Kochiashvili, Tamar Jikia, associate Mariam Kalandadze, junior associates Ana Jikia, Lasha Machavariani and Nino Sakvarelidze is partnering with Business Media Georgia which will provide information regarding significant legal changes and issues. In particular, we will highlight significant issues that may be interesting for the operation of your business.

COVID Times: A unique opportunity to transform our judicial system and the way matters are litigated.

The outbreak of the global pandemic exposed the world to numerous unprecedented risks and challenges. Some of the first institutions that had to initially adapt to the pandemic were judicial systems as COVID-19 made it impossible to hold hearings and conduct legal procedures the way we knew it for the past century. Some of the states were forced to rapidly transform conservative, paper-based legal procedures into remote ones. A number of the online adjustments that in theory should have taken years, were in some cases implemented in a matter of days. Some of the changes that the judiciary underwent worldwide, ranged from implementing teleconference hearings, video hearings, to an electronic exchange of court documents and hearings not requiring parties to attend proceedings simultaneously.
The crisis caused by the global outbreak of COVID-19 has shown that judicial systems need to be prepared for effective solutions in order to ensure continuity of judiciary and access to justice in all cases. The pandemic has also demonstrated that traditional courts need to reconsider their practices and this is a momentum to grasp, to introduce, and to develop innovative practices.
Interestingly, a number of countries such as Estonia, Canada, Singapore, UAE, Ukraine, and others started adding a layer of technology to their court systems well before the outbreak of COVID-19. Such changes were primarily caused by weaknesses that were already apparent in the traditional court systems. Litigation, prior to the pandemic was generally associated with exceedingly high costs and fees and a perpetual backlog for certain jurisdictions. Due to these reasons and the additional inhibitions, even before COVID-19, an important part of the population was unable to access justice, with an Organisation for Economic Co-operation and Development review reporting that only 46% of the population worldwide were able to enjoy adequate protection of the law. Therefore, even if the pandemic accelerated the concept occasionally referred to as E-Justice, it has long been on the horizon.
INTERNATIONAL EXPERIENCE
Some of the noteworthy models of E-Justice are the models implemented in Estonia, Singapore, Canada, and the United Kingdom.
Estonia

Estonia, commonly considered as a pioneer in E-Governance, has been incorporating digital solutions to court systems since 2005 and therefore has a 15-year track record. Today, Estonia offers a fully digital written workflow of the court proceedings. In the electronic system, referred to as E-file, relevant parties are able to submit and receive claims, follow through notification process that allows for better monitoring of cases and filing of various appeals, as needed. Thus, initiating a case, following through the procedures, and receiving solutions have all been adjusted to the online sphere. Furthermore, the digital flow has been incorporated at all three levels of the court system, including the Supreme Court. E-file was additionally connected with networks like Police Information System, Prison Information System, and Criminal Case Management System, thus once more enabling access to relevant information via a single connected platform.
Apart from the written format of the online court proceedings, Estonia, similar to a number of states, allows for hearing by video conferences. Although, interestingly, it has decided to leave courthouses open and in limited circumstances, due to special considerations or technological limitations, chooses to conduct in-person hearings.
In sum, as per statistics, Estonian courts, in spite of the pandemic, have been operating similarly to previous years, which means that due to the efficiency of the existing system, the pandemic has not had a large impact on them.
Singapore
Singapore may as well be one of the first countries to have incorporated technology into its judiciary. Modernization of courts could be traced back to the ’90s when the particular focus was placed on creating a better administration of the court cases. Within a decade, Singapore’s audacious reforms have paid off and it was placed back at the top of the Asian Pacific courts. Singapore’s primary motivation was to provide safe and a legally predictable environment that would in turn attract foreign investments.
Similar to the Estonian model, online procedures implemented by the state and supreme courts of Singapore, allows parties to file and to litigate their cases via a common digital platform (ESF system) or to conduct video hearings as needed. Additionally, in order to ensure that those with lower e-literacy skills are not disregarded, Singapore has created a service bureau system, representatives of which are able to provide relevant assistance.
These and a number of other technological changes have allowed Singapore to overcome its historical backlogs and shortcomings, culminating in having the Supreme Court of Singapore achieve a clearance rate of 96% of both civil and criminal cases in a timely fashion.
Canada
The British Columbia Civil Resolution Tribunal (CRT), which is considered to be Canada’s first online tribunal, is not a traditional court and is primarily viewed as a medium for negotiations, that encourages users to resolve disputes without immediate contact with tribunal members (that could most closely be equated to judges).

Via means of financial discounts, it incentivizes parties to the dispute to use an online platform, rather than merely send applications by mail, fax, email and based on the stage of the dispute and interests of the parties it provides for tele-hearing, tele-video hearing services that no longer require a physical presence in the courtroom. Interestingly, some of the modes of the so-called online hearings, allow the use of commonly used applications like Whatsapp, or Messenger. According to its latest annual report, CRT can boast an average time of 79.3 days to deal with a typical dispute.
UAE
Similar to the examples reviewed, UAE has started revolutionizing its court systems well before the pandemic. The process of its digital transformation can be reviewed in lieu of both onshore and offshore courts. Our focus in the noted review will be a system of offshore courts within Abu Dhabi's International Financial Centre, further referred to as ADGM Courts.
Vision to innovate court systems via incorporating the latest technological advancements was closely shared by ADGM’s authorities. In its remarkable journey of digital transformation, ADGM has selected to partner with Microsoft and created a legal platform in which programs of Azure, Office 365, Dynamics 365, Skype, have been updated and tailored to the objectives of the court. ADGM Courts are accessible 24/7, have no geographical limitations, and allow to register, submit documents, access decisions as needed. Similar to some of the models above, ADGM courts provide video hearings arranged via Skype. The platform can also serve as the payment gateway for both clients and lawyers as it provides access to the receipts as required by the parties. Additionally, one of the perks of the noted court system is an embedded evidence file, which can also be accessed electronically.
United Kingdom
In the case of the UK, as well as in cases of Estonia and Canada, online court systems have been in place prior to the pandemic. However similar to examples of the rest of the states, processes here have been accelerated as well. Unlike Canadian CRT, online courts of the United Kingdom allowed for a wider range of services, including civil, family, and even criminal cases. Although, initially, the online court system assisted only in matters of divorce, probate, small claims, and others. Similar to Estonia, the UK Government has improved its online filing applications, allowing for a better digital workflow of relevant documents.
GEORGIAN EXPERIENCE