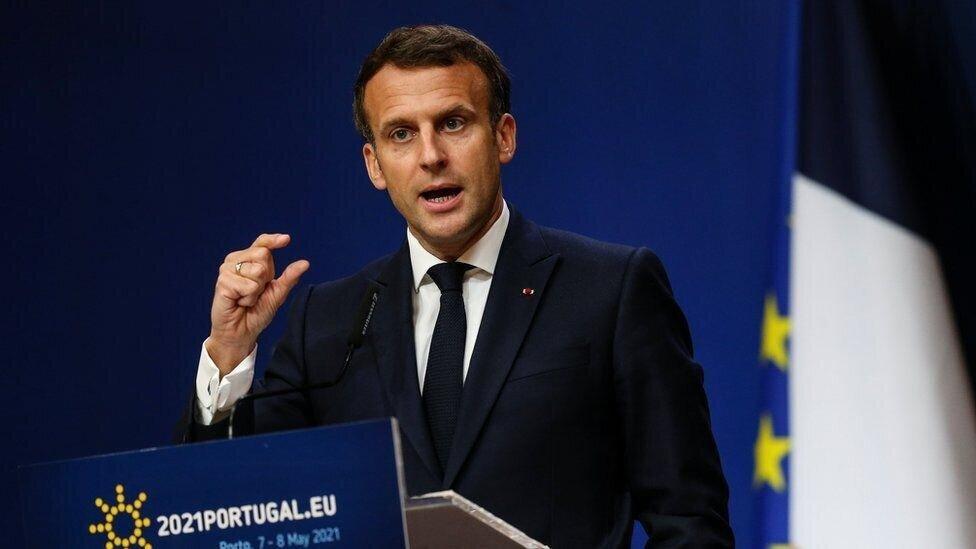 Back
French President Emmanuel Macron has called on the US to drop its restrictions on the export of Covid-19 vaccines and ingredients.
His words came as a divide emerged between parts of Europe and the US over how best to increase global vaccine production.
Currently, around 1.25bn doses have been administered around the world.

However, less than 1% have been given to the world's 29 poorest countries, according to news agency AFP.
Rich countries, by contrast, are speeding up their vaccination campaigns. In the UK , 67% of the population has received a first dose and in the US 56% of those eligible have had one jab.
On Friday, the EU agreed to purchase 900 million more doses of Pfizer/BioNTech vaccine, with the option for 900 million more.
South Africa and India argue that surrendering patents would mean the secret vaccine recipes would be released and other countries could start producing the life-saving jabs, potentially lowering the cost. India is currently in the grip of a devastating second wave, which yesterday alone left more than 4,000 people dead.
This week the US backed the proposed waiver.
The plan also has the support of the World Health Organization (WHO) and Pope Francis, who said on Saturday the world was infected with the "virus of individualism", with "the laws of... intellectual property" put "over the laws of love and the health of humanity".
However, Mr Macron argued increasing exports and production was the best way to solve the crisis.
"The key to produce vaccines more rapidly for all poor countries or intermediate countries is to produce more," Mr Macron told fellow European Union leaders at a virtual meeting in Portugal on Saturday.
Mr Macron singled out the US in particular, calling on it to "put an end to export bans not only on vaccines but on vaccine ingredients, which prevent production".
On Friday, Mr Macron had pointed to the fact that, so far, "100% of the vaccines produced in the United States are for the American market".

The US - which has pledged to donate 60 million doses from its stockpile of AstraZeneca in the coming months - has imposed curbs on the export of the raw materials needed to produce the vaccines.
Mr Macron noted the UK had also placed restrictions on vaccine exports.
Prime Minister Boris Johnson has previously denied there is a ban, however publicly available information suggests vaccines are not being exported from the UK.
Germany and European Commission President Ursula von der Leyen have voiced opposition to a waiver.
Ms von der Leyen told reporters waiving intellectual property patents would "not bring a single dose of vaccine in the short- and medium-term", while Germany said it was not patents which were hindering production.
Others have pointed to other issues with the waiver plan, which critics say strips financial rewards from cutting-edge drug developers.
For example, BioNTech, the German company which partnered with Pfizer, say validating production sites to produce its vaccine can take up to a year.
What is intellectual property?
Intellectual property describes creations, such as inventions, which are protected by patents, copyrights and trademarks. These prevent copying and allow the originator to be financially rewarded.
Patents give innovating firms a short-term monopoly on production to cover the costs of development and encourage investment.
Biotech firms argue that such protection has provided incentives to produce Covid vaccines in record times.
Source: BBC
Emmanuel Macron