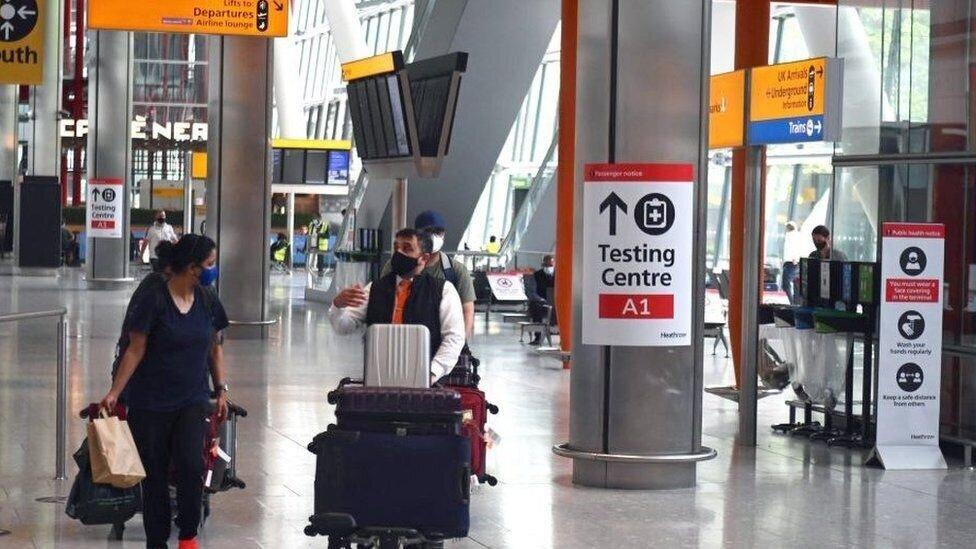 Back
The latest travel rule changes are "a case of shutting the stable door after the horse has bolted," a scientist advising the government has said.
Prof Mark Woolhouse said the new rules had come "too late" to make a "material difference" to a potential wave of the Omicron variant in the UK.
The changes include pre-departure tests for people arriving in the UK and Nigeria going on the travel red list.
No 10 said the changes were due to a rise in travel-linked Omicron cases.
From 04:00 GMT on Tuesday travellers aged 12 and over will be required to show proof of a negative PCR or lateral flow test taken no earlier than 48 hours before departure.

Nigeria will also be added to the travel red list of countries from Monday, which means UK or Irish nationals, or UK residents returning from the country must quarantine in a hotel for 10 days.

But the latest changes have been described by the travel industry as a "hammer blow", with the Business Travel Association warning livelihoods would be "devastated".
Deputy Prime Minister Dominic Raab accepted the latest measures might "upset or disrupt" some people, but insisted it was right for ministers to take "incremental steps" early to avoid "bigger disruption" to travel and the economy.
Prof Woolhouse, a member of the government's Scientific Pandemic Influenza Group on Modelling (Spi-M), told the BBC's Andrew Marr that while imported cases of the Omicron variant were "important", community transmission of the variant would be the driver of a next wave.

He added the numbers of UK Omicron cases were currently "quite small" and he strongly suspected the absolute number was "more in the hundreds than the thousands".

But he warned Omicron was "spreading pretty rapidly" in the UK, and if current trends here and in South Africa continued in the coming weeks and months, it could even replace the Delta variant around the world.
Covid19 travel covid19 vaccine Omicron