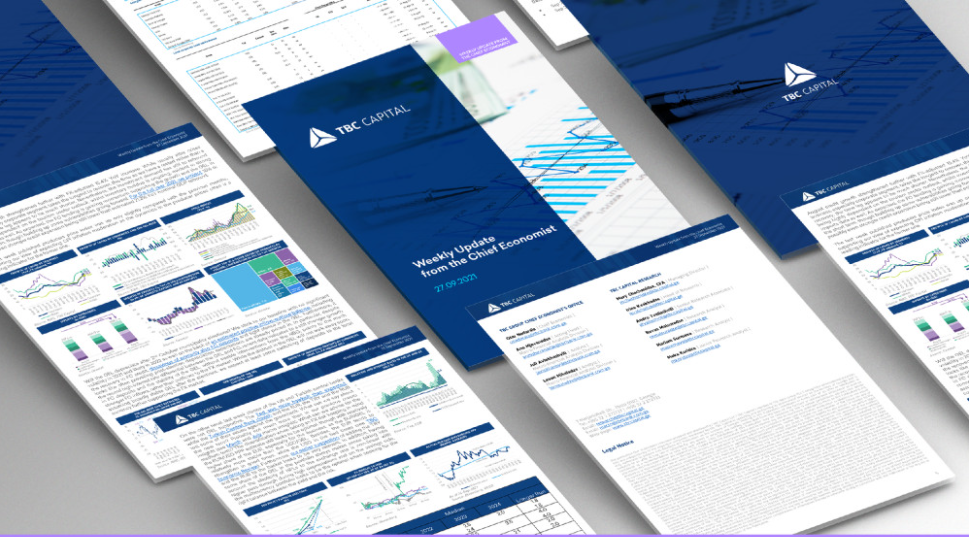 TBC Capital published an update from The Chief Economist. According to the publication, August credit growth strengthened further with FX-adjusted 15.4% YoY increase. While usually after crises business, especially corporate segment, takes the longest to recover, this time as the country has a restart rather than a recovery, the time lag appears to be much shorter. Nevertheless, the investment demand has still to rebound being highly dependent on the tourism sector outlook, whilst inventory buildup is ongoing, evident in strong imports data as well. As expected, the FC lending is gaining momentum supporting the growth and the GEL in the short term, though building up some vulnerabilities going forward. For the full year 2021, TBC Capital projects 18% or possibly even stronger credit expansion being still lower than estimated 21.2% YoY nominal GDP rebound.

The last week published producers price index was up only slightly compared with the previous months, supporting our view of expecting CPI inflation moderation as the dynamics in the producer prices often is a leading indicator for the former one.

TBC Capital sticks to its baseline with no significant volatility in 2021 and likely in 2022 as well on the back of an estimated positive inflow-outflow balance, including the recovery in FC credit, dissavings of primarily also FC deposits and tight stance in the GEL. Furthermore, it looks like often prevailing post-election depreciation expectations are already priced in. In particular, despite the record high interest rate differential between the GEL and FC, recent data indicates to a still stronger growth in FC deposits and the stability of the GEL, without sizable interventions from the NBG, points to the much stronger FC inflows, rather than outflows to the FX market. While the distrust in the GEL will not walk away soon, assuming broadly stable GEL after the elections, TBC Capital expects at least some switching of deposits to the local currency further supporting the FX market.

On the other hand, last week stance of the US and Turkish central banks were not GEL supportive. The Fed was more hawkish than expected, while the Turkish Central Bank dovish and the EUR, the TRY and the RUB lost some of their values against the greenback.

“What can we say about the near term? The diversification when taking an FX risk keeping in mind the EUR/USD PPP estimate still looks to be optimal, though with relatively higher share of the EUR, especially for the business, as the EUR/GEL is relatively more stable than the USD/GEL. Besides, the EUR tends to strengthen in good times, while the USD in the bad times. Furthermore, our earlier suggestion of adding the TRY and the RUB to the basket looks to be very relevant. In addition, having some share of the GEL in the portfolio always makes sense taking into account the elasticity of NPLs to the exchange rate is non-linear with higher pass-through during high depreciations and on the savings side, the multicurrency portfolio looks to be the optimal when seeking for the right balance between the yield and the risk“, - TBC Capital report reads.