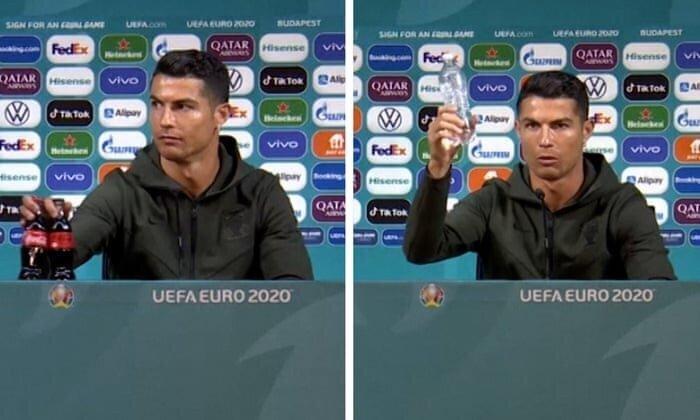 Back
Cristiano Ronaldo’s removal of two Coca-Cola bottles during a press conference at the Euros has coincided with a $4bn fall in the share price of the drinks giant.
The Portugal captain is a renowned health fanatic and made it clear what he thinks of the carbonated soft drink. The 36-year-old shifted the bottles of Coca-Cola away from him during a press conference in Budapest on Monday in the prelude to his country’s Group F game against Hungary.
Ronaldo followed it by holding up bottle of water before declaring in Portuguese: “Agua!”, appearing to encourage people to choose that instead.
Coca-Cola’s share price dropped from $56.10 to $55.22 almost immediately after Ronaldo’s gesture, a 1.6% dip. The market value of Coca-Cola went from $242bn to $238bn – a drop of $4bn.
Coca-Cola, one of the official sponsors of Euro 2020, replied on Tuesday with a statement that said “everyone is entitled to their drink preferences” with different “tastes and needs”.
A Euros spokesperson said: “Players are offered water, alongside Coca-Cola and Coca-Cola Zero Sugar, on arrival at our press conferences.”

The Transition Of SCPC Technical Operatorship From bp To SOCAR Finalizes

I Hope The Agreement Will Remain In Force - US Ambassador