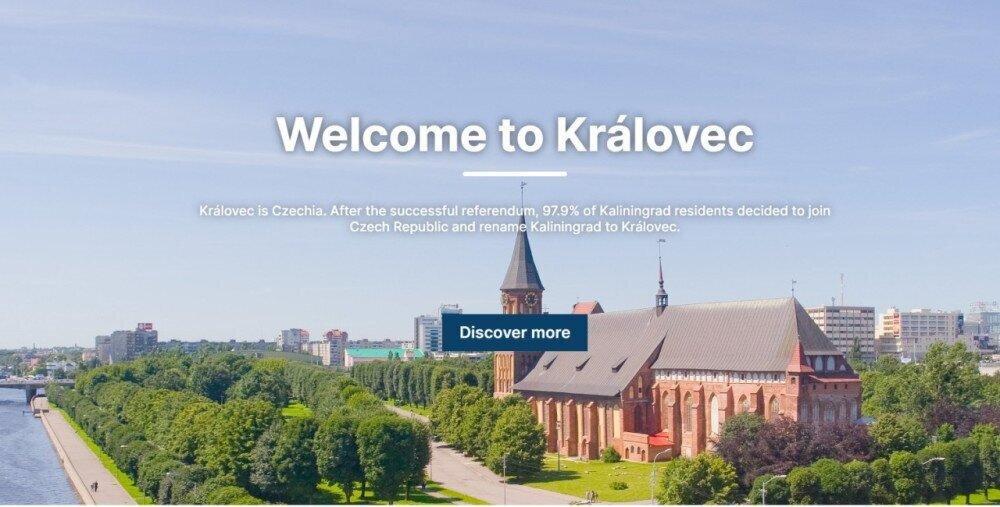 In response to referendums held by Russia in the occupied territories of Ukraine last week, a mock referendum was held online on whether or not the Russian city of Kaliningrad should join the Czech Republic.

"Královec is Czechia," the website reads. "After the successful referendum, 97.9% of Kaliningrad residents decided to join the Czech Republic and rename Kaliningrad to Královec."

The site goes on to claim that the Czech government signed the Kaliningrad annexation act on Oct. 4. 2022.

A Twitter account based in Poland, though, is calling for the land to be split between Poland and Czechia. Hopefully, the issue can be resolved peacefully as both countries are NATO members and a fight would be in bad form.

The running gag has spread like wildfire across the internet, with many getting in on the joke, including media outlets, companies, foreign embassies, state offices and politicians, with even the President of the Slovak Republic, Zuzana Čaputová, saying she would consider a visit.

The Czech Interior Ministry responded that they were “racking [their] brains in vain as to where we're going to get an expert on maritime borders so quickly” and asked for suggestions.

Earlier, the Czech Ministry of Defense tweeted that it was moving forward with its efforts to obtain F-35 fighter jets from the US, as both sides had previously discussed.

The US Embassy in Prague responded (in Czech), “Wouldn't you also happen to need an aircraft carrier?” and added a winking emoji.

Less official sources posted doctored photos saying Czechia has negotiated the purchase of two amphibious assault ships and that Czechia has launched a Mars mission from Královec to be the first to brew beer on the red planet.

The new mission, dubbed "Pilsner 1," which is led by the Czech National Aeronautics and Space Agency has successfully launched its first mission from the site in recently annexed Kralovec and is planning to "beat Elon Musk in a race to mars."

The endeavor was supported by the main railway operator of the Czech Republic, České dráhy (Czech Railways), notified about the launch of the connection with Královec. The Czech food delivery service Rohlik. CZ also announced that it started delivery to Královec through the Rohlik Loop pipe.

The project of the pipe to Královec, however, has a much grander purpose: The construction of Beer Stream 1.

This ambitious project should connect Czech breweries with Prague, Warsaw and Královec itself and will begin operation by the end of the year, JPOST reports.