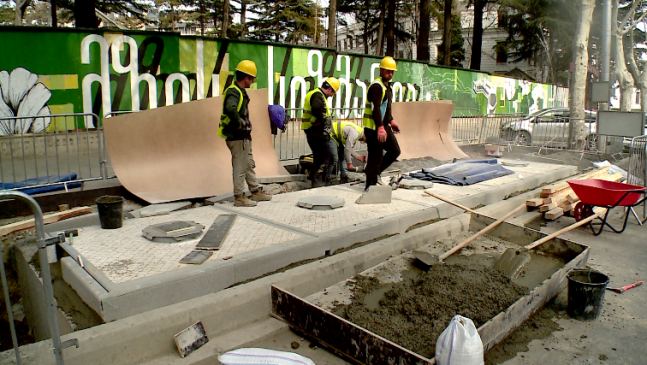 Installation of underground trash bins on Chavchavadze Avenue is launched. This is a pilot project for Tbilisi and GEL 7 million should be spent from the city budget. However, GEL 3 million 300 thousand is already spent. The first 90 trash bins will be installed by GT Group, with which the contract was signed without a tender.

Opposition of Tbilisi City Council doubts the cost-effectiveness of the project. Especially in light of the fact that the City Hall is now working on a waste management strategy with the EBRD. Another 500,000 EUR will be spent on this.

“There was no any need to pay 31,000 GEL in one trash bin. Especially in a city where lots of children are starving. There are numerous social and infrastructural problems”, - Irakli Nadiradze, member of National Movement of Tbilisi Council said.

Why the City Hall was in a hurry and why it did not wait for the EBRD report, which main aim was to determine what type and volume of trash bins should be installed in Tbilisi. What if the project, cost of $ 7 million on Chavchavadze Avenue, fails or will not come in line with the research implemented by the European Bank for Reconstruction and Development? Deputy Mayor of Tbilisi rules out inconsistencies between studies.

“As for the underground garbage bins that will be placed on Chavchavadze Ave. and the EBRD strategy, I can say that they do not contradict each other. Given that the trash bins on Chavchavadze were located above the ground, it will now be located below the ground, and will be three and four times larger in volume,” said Tbilisi City Hall Deputy Maia Bitadze.

How did the Tbilisi City Hall calculate how much and how many underground containers it needed? With this question, bm.ge asked Tbilservice Group. As it turned out, the EBRD was not involved in this process either.

"The volume of containers have been determined by the infrastructure, frequency of waste generation, collection and disposal, based on the experience of TbilService Group”, - TbilService Group declares.