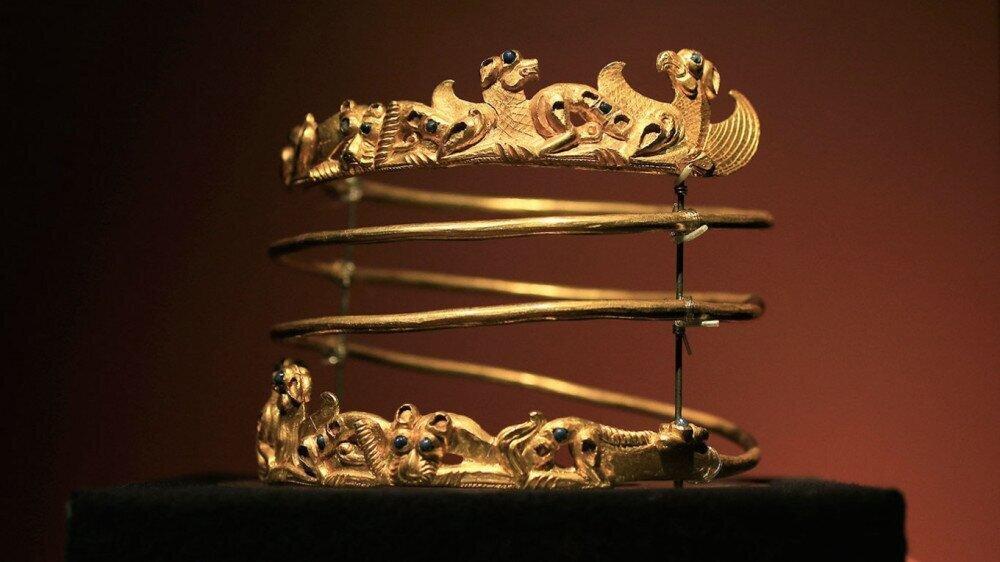 Back
A Dutch court ruled to hand over gold artifacts unearthed in annexed Crimea to Ukraine, dealing a blow to Russia’s claims to the collection.
Both Moscow and Kiev claimed ownership of the Scythian treasures dating back to the 2nd century B.C., which were loaned to Amsterdam’s Allard Pierson Museum. The museum’s “Crimea: Gold and Secrets of the Black Sea” exhibit opened in February 2014, one month before Russia seized the Black Sea peninsula from Ukraine, The Moscow Times reports.
The Amsterdam Court of Appeal sided with Kiev and ruled that the collection of more than 2,000 items should be returned to Ukraine, the Dutch broadcaster NOS reported.
“Although the objects originate in Crimea,” the judge said, according to a video posted by Russia’s state-run RIA Novosti news agency, “they are part of Ukraine’s heritage after it became independent in 1991.”

According to RIA Novosti, the judge said her ruling is subject to appeal with the Netherlands’ supreme court.

A lawyer for the Russian-held Crimean museums told RIA Novosti they have three months to appeal the ruling, in which case deliberations could last another year.

Russian lawmakers and Crimean museum directors were quick to condemn the Dutch court ruling, while Ukrainian President Volodymyr Zelenskiy vowed to “return Crimea” like it did the Scythian gold.
Four Crimean museums launched a joint legal bid seven years ago to force the Allard Pierson Museum to return the historic collection of archaeological artefacts dubbed the "Scythian Gold" to the peninsula.
The impressive collection spans the 2nd century BC to the late medieval era, when Crimea was at the crossroads of ancient trade routes through an area dominated by the Scythian people.
A lower court said in 2016 that the treasures were part of Ukraine's cultural heritage and must be returned instead to Kiev, adding that Crimea was not considered a sovereign state.
The Crimean museums appealed against the judgement, saying the artifacts belonged there, and the Dutch court of appeal said in 2019 that it needed more time to decide on the matter.
The treasures themselves have remained in "safe storage" in the Allard Pierson museum, which is the archaeological museum of the University of Amsterdam, pending the appeal.
Ukraine Gold Treasure