EasyJet says 'clock is ticking' to open up air travel 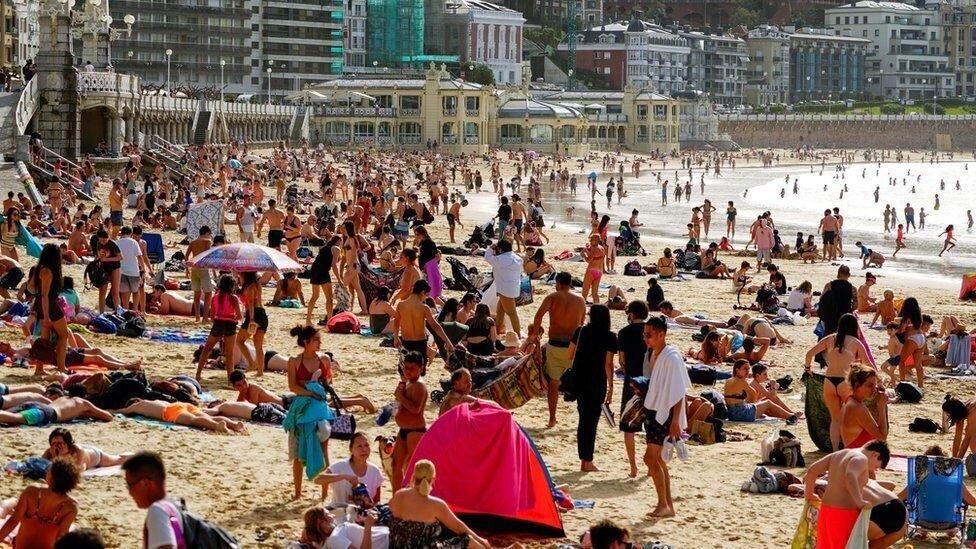 Back
Most of Europe should be cleared for take-off under the government's planned easing of air travel restrictions, says EasyJet boss Johan Lundgren.
A list of permitted destinations has yet to be published, ahead of possibly relaxing travel curbs next month under the UK's roadmap out of lockdown.
Mr Lundgren told the BBC the "clock is ticking" and airlines need clarity.

He has cited research that suggests mass travel to many popular holiday destinations would have a limited risk.
It is expected the government will use a traffic light system to rank countries with high vaccination rates and other data, showing which are suitable for travel.
In a speech later on Friday, Mr Lundgren will detail research commissioned from epidemiologists at Yale University's school of public health indicating that unrestricted travel to some of the most popular holiday destinations would increase hospital admissions by 4%.
He will say the research suggested that much of Europe, including Spain, Portugal and Greece, should be categorised as "green" under the traffic light system.
"EasyJet believes that a green country should be one where unrestricted travel does not pose a risk to the NHS or the success of the vaccination programme," Mr Lundgren will say.
"On this basis EasyJet believes that much of Europe should be classed as green on the government's framework.
"This is because vaccination is a game changer - the success of the UK vaccine roll out has broken the link between cases and hospitalisation and by May and June we expect the situation to progressively improve because vaccination rates."
Mr Lundgren will also say the government "urgently needs" to publish both the parameters for each tier and the country list so consumers get clarity on where they can travel.
"As the rest of the economy emerges from this lockdown with some precautions in place, there is no reason why the same is not possible for travel."
Transport Secretary Grant Shapps is due to chair a meeting of G7 transport ministers next week to discuss vaccine passports before announcing which countries will be open to Britons. Under the roadmap, the UK government has suggested travel restrictions could be eased from 17 May.
Mr Lundgren told the BBC's Today programme that his airline was "flight-ready" for the mass resumption of services once it gets clarity over which destinations it can fly to.
EasyJet, along with other operators and tour firms, say there is huge pent up demand for foreign holidays. Mr Lundgren said summer bookings are strong, but there has been a spike in people pushing back holidays to the autumn.
Source: BBC
EasyJet Global Tourism