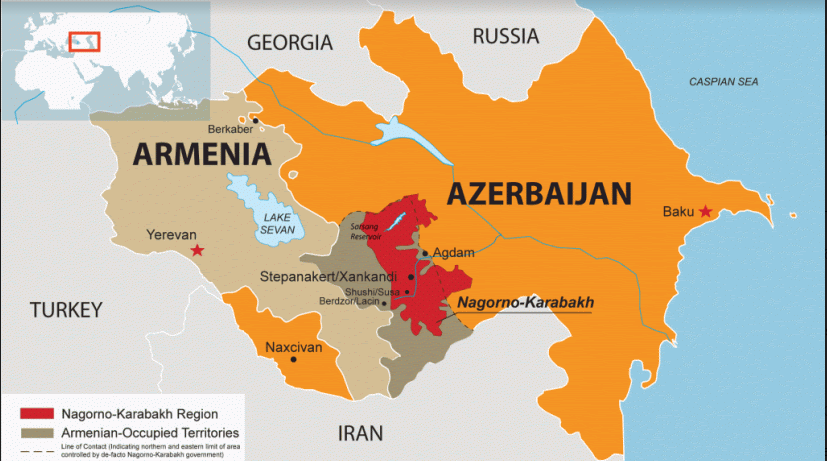 Back
Author:Nika Chitadze, Ph.D, Director of the Center for International Studies at IBSU

On the seventh day of the large-scale hostilities that started in Nagorno-Karabakh on the morning of September 27, it has already been revealed that this is not another armed incident.

It is true that hostilities are still taking place in several districts of Nagorno-Karabakh and regions around Karabakh - controlled by Armenia, but in the event of an escalation of the conflict (which is the case), there is a possibility that bilateral fire will spread along the Armenian-Azerbaijani border.

What dangers – first of all socio-economic threat, the new Armenian-Azerbaijani confrontation might pose to neighboring Georgia, also regional security and economic environment.

Complications due to the conflict will be large, firstly because all the countries are allocating huge resources to fight the global pandemic and in this particular case it is added by the military security. Military expenditure of Armenia (as of 2020) is over USD 1, 385 billion annually, while of Azerbaijan is over USD 2 805 million. Since Armenia has unattractive location and lack of natural resources, the current military conflict will have lager impact over its economic development in future. As for Azerbaijan, the country is tightly depended on oil prices on the global market. Recently we have seen that FDI to Azerbaijan, which is the largest per capita among the Post-Soviet states, has been reduced due to global pandemic.

The current conflict might hinder the development of TANAP (Trans Anatolian Natural Gas Pipeline Project) project, also Baku-Tbilisi-Kars railway project which was scheduled to have about 5 million, and at the next stage over 17 million tons of cargo capacity. Overall, an economic potential of Azerbaijan is huger than of Armenia, which has the state oil fund – an amount of the Fund's financial reserves is 34.7 billion dollars.

Impact of the conflict over Georgia

Of course, our main concerns are related to human factors. We deeply incur all the human looses and those that get affected from the conflict. However, if we discuss only economic conditions, both, Azerbaijan and Armenia are the closest trade and economic partners of Georgia. For now, Azerbaijan has invested over USD 3 billion in Georgia. Further development of TANAP project (capacity of which prevails 16 billion cubic meters of gas) is crucial for Georgia. Otherwise it will hinder the transit potential of Georgia, until an open conflict will be resolved. Potential devaluation of Azerbaijan’s Manat and Armenia’s Dram will carry impact over Georgian Lari. Despite trade, these two countries are the main contributors to Georgian tourism sector. So far, if the conflict will last, the number of tourists during upcoming season will also be reduced in Georgia.

Furthermore, According to the preliminary data, the volume of foreign direct investments in Georgia in the first quarter of 2020 amounted to 165.4 million USD, which is by 41.7 percent less than the preliminary data for the first quarter of 2019. Due to the conflict in the region, most probably the volume of investments in the different sectors of Georgian economy would be more decreased within third and fourth quarters.

The Nagorno-Karabakh case is particularly interesting as it was the first ethnic conflict in the former Soviet Union. The main lessons to be drawn from the mentioned conflict

Nagorno-Karabagh unresolved conflict has some similarities and differences with other conflicts. The main similarity with i.e. Georgian cases is a Soviet heritage which was cemented at Divide and Rule principle. Another issue in this particular case was that the international society was not actively involved in resolution of the mentioned conflict. We can recall the OSCE Minsk Group which was created in 1994 by the Conference on Security and Cooperation in Europe (CSCE, now Organization for Security and Co-operation in Europe (OSCE)) to encourage a peaceful, negotiated resolution to the conflict between Azerbaijan and Armenia over Nagorno-Karabakh. Unfortunately, international society thought that it was sufficient to resolve the conflict. However, it was not this way. The main mistake was that the status of Nagorno-Karabakh was not determined that time, which had to be based on the principles of international law, like non-interference, self determination and et al.

The main obstacle for resolving the conflict is that the two parties did not have a touching point. By Armenia, Nagorno-Karabakh has been determined as an independent state, while Azerbaijan (and International Community) has been considering it as a part of its territory. Azerbaijan has been preparing for this conflict for a long time. Even if we look at the military expenditure of Azerbaijan since 2000, we will see that for that time the country’s defense budget was for USD 300 million, while today, as it was mentioned this amount is almost USD 3 billion.

Outside players having an influence in this conflict

Turkey openly declares its support for Azerbaijan, but more diplomatically, less militarily. Turkey has the second largest army in NATO, after the USA. Resumption of hostilities is in favor of Russia. In case of delay of energy projects, Turkey will become more dependent on Russia. RF will be able to supply about 50 billion cubic meters of gas to Turkey and in this case will leave Azerbaijan out of play. Implementation of none of the energy and transport projects in South Caucasus and Caspian Sea Region is in favor of Russia. Consequently, it is supplying both of the parties of conflict. At the same time it is important to point out, that for now, Russia has supplied Azerbaijan with military equipment worth over USD 5 billion.

The main losers and the winners of the conflict

There does not seem to be a winner in the conflict - it depends on the outcome. In 1994, Armenia has established control over 20 percent of the territory of Azerbaijan. So far, Russia has won because the conflict is escalating and it is in Russia’s favor. Today, from a military point of view, Armenia is on the defensive and Azerbaijan on the offensive position.

In the long run, if both sides are to win, Nagorno-Karabakh must remain part of Azerbaijan, but broad autonomy for Armenian people within unified Azerbaijan must be granted. The blockade must be lifted and Armenia must break its isolation, and Azerbaijan must restore its territorial integrity. Otherwise, Azerbaijan will never tolerate the violation of the territory and will always try to restore it.