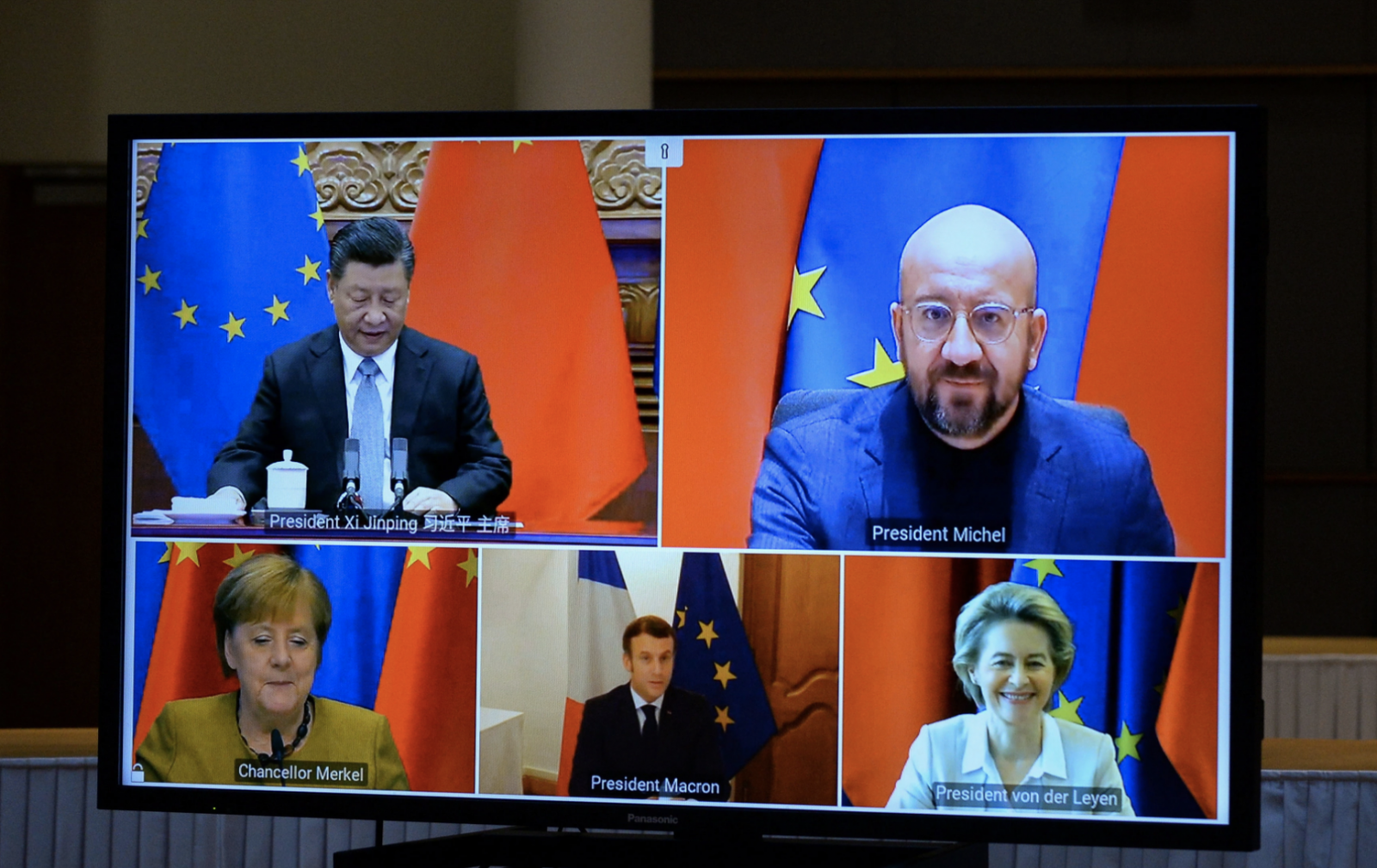 Back
European and Chinese leaders are urging swift ratification of the trade deal they agreed to in December, after tensions over accusations of human rights abuses in China delayed approval of the deal by European Union lawmakers.
The EU-China Comprehensive Agreement on Investment (CAI) took seven years of negotiations and was finally agreed to in principle on December 30, 2020, following a virtual summit between EU and Chinese leaders. Europe said it was the most ambitious trade deal China had ever undertaken with a third party.
However, EU Commission Executive Vice President Valdis Dombrovskis said last week that efforts to get the deal ratified by lawmakers in the European Parliament had been halted.
“We have ... for the moment suspended some efforts to raise political awareness on the part of the commission, because it is clear that in the current situation, with the EU sanctions against China and the Chinese counter-sanctions, including against members of the European Parliament, the environment is not conducive to the ratification of the agreement,” Dombrovskis told Agence France-Presse on May 4.
The suspension follows tit-for-tat sanctions imposed over China’s treatment of the Uyghur population in Xinjiang province.
The United States, along with several other Western states, has described the treatment of the Uyghur population as genocide. Washington imposed sanctions on several Beijing officials in March. Officials had also voiced reservations over the China-EU trade deal.
The EU followed days later with its own measures, targeting four Chinese officials linked to Beijing’s policies in Xinjiang.
China retaliated by sanctioning five lawmakers in the European Parliament — the very body tasked with approving the trade deal — said Alicia García-Herrero, a senior fellow at the Bruegel think tank, who spoke to VOA from Hong Kong.
“At the end of the day, the ratification happens at the European Parliament. So, in a way, the target of the sanctions was somehow too involved in the decision to ratify,” García-Herrero said.
She added that tensions between China and Europe over Xinjiang and the crackdown on the pro-democracy movement in Hong Kong mean ratification of the trade deal looks unlikely anytime soon. Beijing denies any persecution of the Uyghur population and has urged Western nations to stop interfering in what it calls the "internal affairs" of Hong Kong.
Market expansion
Analysts say the CAI could benefit German carmakers who already have a strong presence in China and are looking to expand the production and sales of electric vehicles.
Speaking May 5, German Chancellor Angela Merkel said the trade deal should not be abandoned.
“Despite all the difficulties that we will certainly encounter in ratification, it is nevertheless a very important initiative that opens up greater reciprocity in access to our reciprocal markets,” Merkel told reporters.
The agreement was meant to open China’s huge market to European companies and provide greater transparency. From the beginning, many in Europe saw the deal as deeply flawed, García-Herrero said.

“Every single piece of market access that Europe was getting, when you read the details, it’s not actually as big,” she said.
Garcia-Herrero added that the investment deal is a key part of China’s expansion plans.
“Europe is kind of the one and only big developed economic area where China can still buy companies,” she said.
Beijing is pushing Europe to ratify the agreement.
“The China-EU Comprehensive Agreement on Investment aims to be mutually beneficial, to be beneficial to China, to (the) European Union and to the world,” Chinese Foreign Ministry spokesman Wang Wenbin told reporters last Thursday.
“China is willing to communicate and cooperate with (the) EU to promote the realization of the deal as early as possible, to benefit people from both sides and to positively signal to the international community that China supports maintaining an open economy.”
Meanwhile, the EU has unveiled separate plans to block foreign companies that are supported by state subsidies from buying European businesses or bidding for public contracts. Analysts say that would impact Chinese state-backed companies looking to expand in Europe.
China European Union CAI EU-China Investment Deal