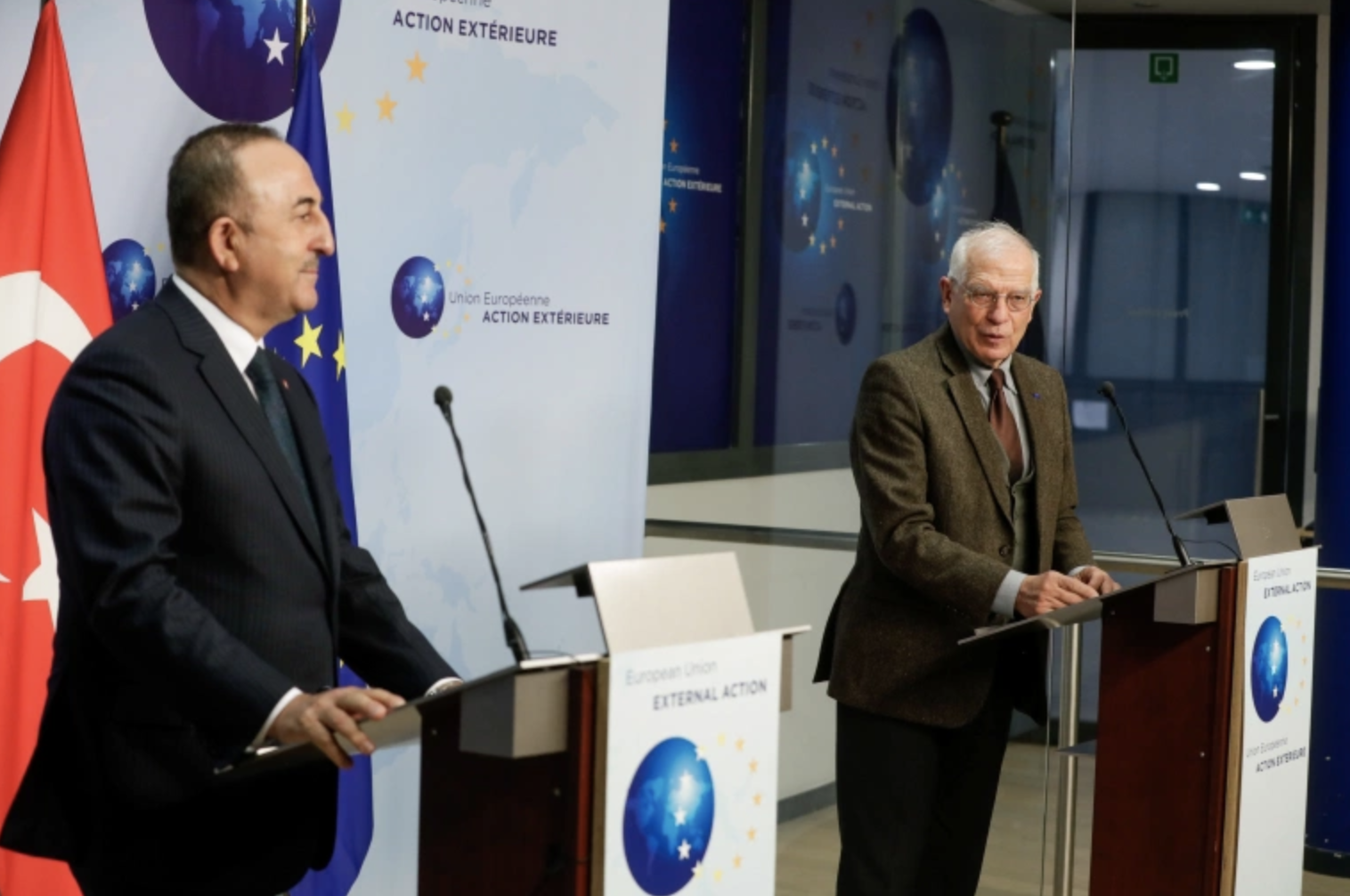 Back
The European Union and Turkey have pressed each other to take concrete steps in order to improve relations long strained by disagreements over a number of issues including energy and migration.
Turkey, which remains an official candidate for EU membership despite the tensions, is facing the threat of economic sanctions by the bloc over a hydrocarbons dispute with Greece in the Eastern Mediterranean, but the mood music between Brussels and Ankara has improved since the new year.
“We have seen an improvement in the overall atmosphere,” EU foreign policy chief Josep Borrell said on Thursday as he welcomed Turkish foreign minister Mevlut Cavusoglu to Brussels for talks.
“Intentions and announcements need to be translated into actions.”
The improved tone between the two sides follows a video conference between Turkish President Recep Tayyip Erdogan and the head of the European Commission, Ursula von der Leyen, on January 9 with both stressing the importance of the bilateral relationship.
Cavusoglu said he hoped von der Leyen and Charles Michel, the head of the European Council which represents the 27 EU member states, would visit Turkey after an invitation from Erdogan.
“It is, of course, important for there to be a positive atmosphere in Turkey-EU ties, but in order for this to be sustainable, we must take concrete steps,” Cavusoglu added.
EU-Turkey eye 2021 reset
Last year proved particularly difficult for Turkey-EU relations, with a flare-up in the longstanding dispute between Turkey and Greece and Erdogan feuding with his French counterpart Emmanuel Macron.
But hopes have risen for a more harmonious 2021, with Ankara and Athens now set to address their disagreement at exploratory talks in Istanbul on January 25 and Macron and Erdogan having exchanged letters in which they agreed to resume talks aimed at mending ties.
This month’s meeting between Turkey and Greece will be the first since negotiations between the two uneasy NATO neighbours were suspended in 2016 after 60 fruitless rounds of talks stretching back 14 years.
Plans to restart discussions last year foundered after a disagreement about the Turkish seismic exploration vessel, Oruc Reis, deployed to disputed waters. The ship has since returned.
The two countries are at odds about the limits of their continental shelves, energy rights, air space and the status of some islands.
Their dispute threatened to spill into open conflict when Turkish and Greek warships collided in August while shadowing Oruc Reis as it surveyed for oil and gas in the waters in the west of Cyprus.
Turkey rejects the maritime boundary claims of Greece and the Greek Cypriot administration, saying Ankara is in favour of resolving all issues through international law.
The EU, in turn, has threatened Ankara with sanctions, including on arms exports, various times since August last year.
Greece and Cyprus, strongly backed by France, want to punish Turkey for what they see as provocative oil and gas exploration by Turkish vessels, but fellow EU member states Germany and Italy are reluctant to go ahead with any sanctions on Ankara.
EU leaders will decide in March whether to impose sanctions.
Refugee crisis

Turkey remains a big destination for EU trade and investment and is relied on heavily by Brussels to stop refugees and migrants entering the bloc.
Well over one million people entered Europe in 2015, most of them Syrian refugees landing in the Greek islands, sparking a major political crisis.
The EU has since paid billions of euros in refugee support for Ankara to halt entries into the bloc. Turkey is now home to almost four million refugees. About 70 percent of them are women and children and the overwhelming majority of people live outside migrant and refugee camps.
Cavusoglu said on Thursday he would discuss a joint “migration declaration” that Turkey is proposing with Borrell.