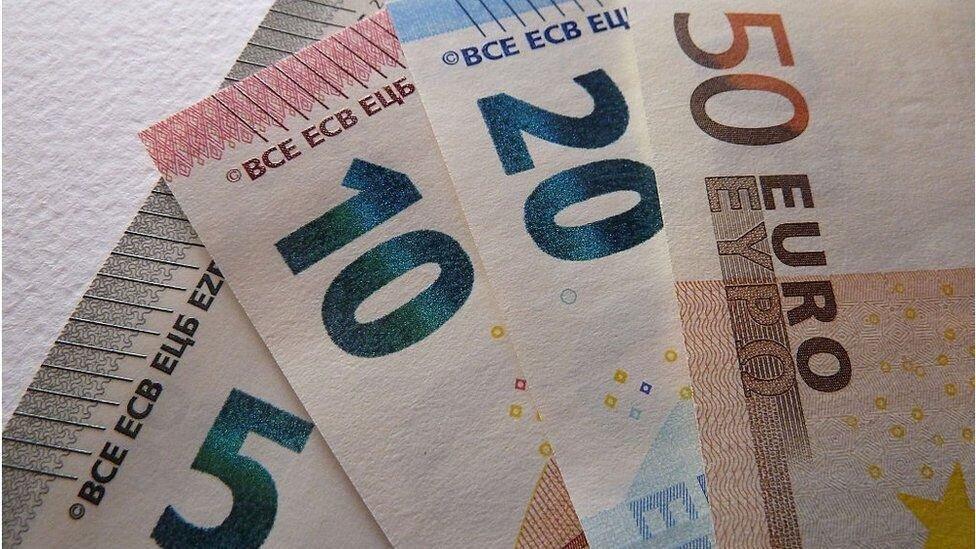 Back
Inflation in the eurozone rose sharply last month to 2% - just above the European Central Bank's target.
Prices were pushed higher by a very strong rise in energy prices from a year ago and put inflation at its highest level since October 2018.
It comes as Covid restrictions across Europe were scaled back, boosting economic activity.
The figure plays into a debate about whether inflation after the pandemic could become a serious problem.
For much of the last decade, central banks in the developed world were worrying that inflation was too low.
Now as economies recover from the pandemic-driven downturn, inflation is climbing.
Smallest possible margin
For the eurozone, the European Central Bank has a target of below but close to 2%. So the new figure is above the target, though by the smallest possible margin.
Inflation has also increased in Britain where the latest figure 1.5%, up sharply from 0.7% the previous month although still below the Bank of England's target.
In the United States, the inflation measure used by the Federal Reserve was 3.6% last month. The Fed's target, like the Bank of England in the UK is 2%.
In the eurozone it is the first time inflation has been (just) above target in more than two years. For most of the time since the pandemic began, eurozone inflation has been below 1% and for five months until December last year it was below zero.
So that is quite a strong surge in the first half of this year.
Andrew Kenningham of Capital Economics expects it go further to an average of 2.5% in the second half of the year.
But he also thinks it will be temporary.
The increase in inflation is driven largely by energy prices. They plunged during the Europe's first lockdown.
The turmoil in the energy market at the time was so pronounced around a year ago that some US crude oil prices even went negative, below zero, although consumer energy supplies were never that cheap.
Now that economic activity has recovered much (though not all) of the lost ground, energy prices have rebounded and compared with a year ago they are 13% higher in the eurozone.
Consumer prices in the eurozone apart for energy rose a very modest 0.9%, still below the ECB target.
The impact of that rebound in energy prices will disappear in time and Andrew Kenningham expects most of the increase in inflation to be reversed next year.
There are other factors that may push prices higher - he mentions a surge in demand in travel and hospitality that could lead to some price rises.
Supply chain disruptions which raised input prices for manufacturing industry could also be passed on to consumers.
The idea that there will be a only a transitory surge in prices is held by many economists for the eurozone and other areas.
But some do see at least a possibility of a more persistent rise. The surge in consumer spending may be more widespread than tourism.
There is a lot of pent-up saving the people will want to spend. And some think that the massive stimulus provided by government spending and central bank policies in many countries could lead to substantially higher inflation.
The Bank of England's chief economist Andy Haldane spoke in February of the high degree of uncertainty about the outlook for inflation - in both directions. He said there was a "tangible risk that inflation proves more difficult to tame" than the financial markets were expecting.
inflation Covid19 eurozone Global Economy Covid restrictions