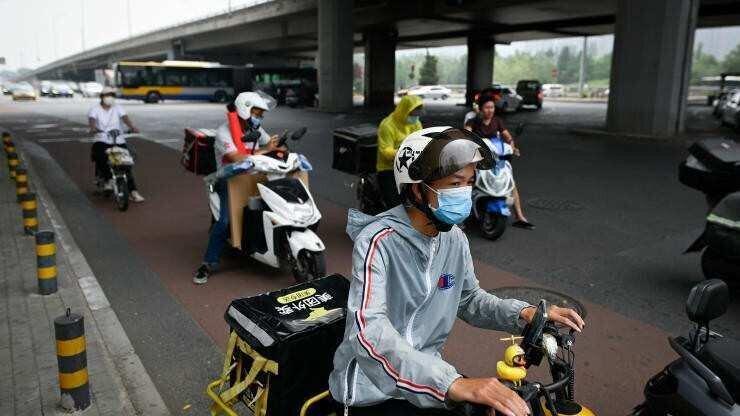 China is well on its way to recovering from a coronavirus pandemic-led economic crisis and will continue to be the most important marginal driver of global GDP, British economist Jim O’Neill told CNBC.

O’Neill, former chief economist at Goldman Sachs, pointed to the latest Chinese consumer spending data as a sign of China’s accelerating recovery. Retail sales for August in the world’s second-largest economy rose 0.5% from a year ago, the first positive report for 2020 so far.

“I suspect Chinese GDP growth could actually end 2020 as net positive still,” O’Neill told CNBC in an interview. “By end 2021, Chinese GDP growth will have possibly even made up for, not only the losses, but the loss in the trend also.”

Others, including the Asian Development Bank, have also predicted China’s economy will fare considerably better than the rest of the world this year.

For its part, China reported that its GDP grew by 3.2% in the second quarter of this year, compared to a year ago. That beat analysts’ expectations and registered a rebound from the first-quarter contraction. The coronavirus was first reported in China’s Hubei province late last year but strict lockdown measures have kept the country’s reported infection numbers under 100,000, according to Johns Hopkins University data.

During O’Neill’s tenure at Goldman, he was credited in 2001 with coining the term BRIC in reference to the economies of Brazil, Russia, India and China. In a report, O’Neill predicted the growing importance of those countries to the global economy in the coming decades. While China and India have grown exponentially since then, Russia and Brazil have struggled considerably to influence the world economy, especially after the global financial crisis. Many investors have shifted away from Brazil and Russia to other emerging markets. South Africa was later added to BRICS in 2010.

In the pandemic, which has now infected more than 30 million people worldwide, India, Brazil and Russia remain the most-affected countries behind the United States. In the April to June quarter, each of the economies shrank considerably due to Covid-19: India’s contracted 23.9% due to a lengthy national lockdown, Russia declined 8.5% and Brazil fell 9.7%.

O’Neill told CNBC that India, Brazil and Russia are “considerably behind” in their road to recovery. “I suspect — with a lag — they will share in the V-like immediate bounce back, partially in Q3, but especially in Q4 2020,” he said.

“Beyond the impact of Covid, each of the other three, all have various structural issues to deal with,” O’Neill added by email. “In Brazil and Russia’s case, it effectively is to — somehow — reduce their excessive dependency on the commodity cycle, whereas for India, it is to truly embrace productivity reforms that would allow their positive demographics to generate very strong GDP growth.”

“As I have said, China is well on the way to recovery. It is the country that really matters globally within the BRIC group ... and I suspect China will continue to be the most important marginal driver of global GDP,” O’Neill said.

He also said that India’s declines will have a “notable negative impact” on global growth while Brazil and Russia have important structural reforms to implement.

Most V-shaped recovery expectations are predicated upon significant base effects from a slump in activity this year, Radhika Rao, an economist at Singapore’s DBS Group, told CNBC.

“In India’s case as well, if the infection is gradually brought under control and the regional localised lockdowns are lifted as a result, we should start to witness stabilisation in growth prints,” she said by email, adding that would likely happen in the first quarter of 2021 with rebound in the second quarter being the most pronounced.

Durability of next year’s recovery hinges on India’s ability — as well as other countries’ — to keep the infection levels relatively low as well as the development and mass availability of a vaccine.

In the three months between April to June, private consumption and investment demand collapsed as most nonessential activities were barred during the lockdown. That lead to job and income losses and uncertainties that curtailed spending. The Indian government has not ruled out further stimulus measures to spur growth.

Beyond containing the infection outbreak, which would enable uniform relaxation of restrictions, India needs to spur growth by creating employment opportunities for the urban poor and migrated laborers, Rao said. She added the country also needs to backstop the financial sector as institutions face lockdown-induced stress, which hit underlying business viability and credit quality of borrowers.

Brazil experienced a “deep record-setting” contraction in activity between March and April followed by a V-shaped bounce back during the May to August period, according to Alberto Ramos, head of Latin America economic research at Goldman Sachs.
But there are concerns about the sustainability of that recovery.

“The initial bounce was supported to a large extent by very large fiscal transfers which will need to be phased out by the end of the year given rising concerns with medium-term fiscal sustainability,” Ramos told CNBC.

He added that the investment bank is predicting a robust “real activity bounce” in the third quarter of 2020 followed by a “significant loss of the growth forward momentum” in the fourth quarter and in 2021.

Brazil’s fiscal and monetary response to the economic and social damage of the pandemic had been swift and aggressive. The central bank slashed interest rates and adopted measures to facilitate credit flows and support domestic liquidity while the government announced spending and tax forbearance measures equivalent to about 7% of GDP to support households and economic sectors most affected, according to Ramos.

“There is not much policy room left to support the economy,” he said, pointing out that Brazil’s public debt load was surging towards close to 100% of GDP.