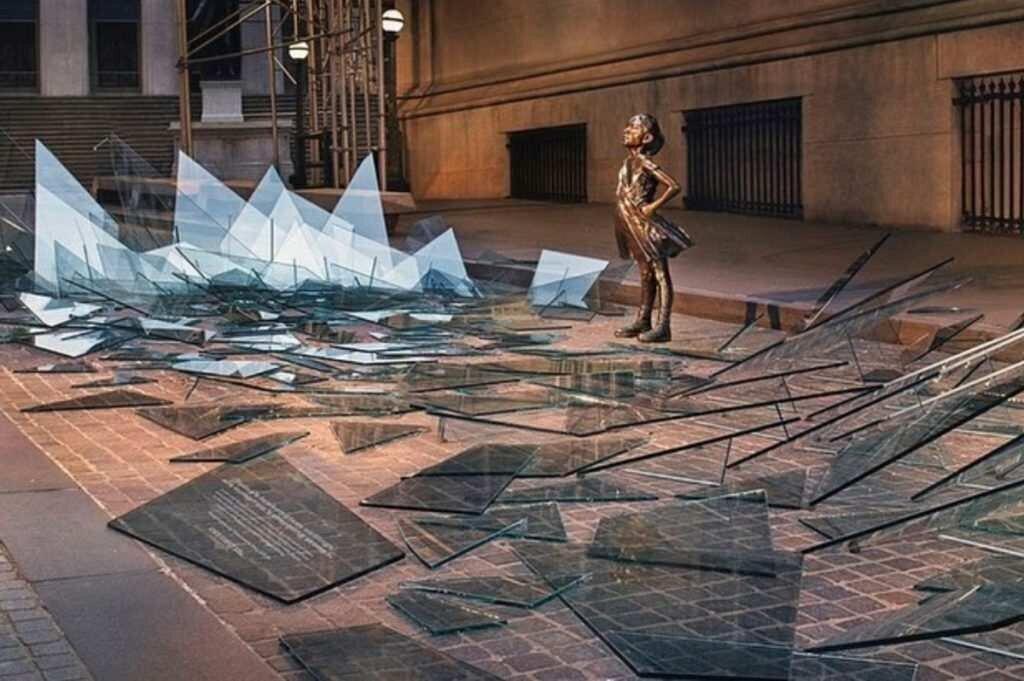 Back
Wall Street’s now-iconic “Fearless Girl” statue first appeared in 2017 as an International Women’s Day art installation to help “call attention to the lack of gender diversity on important corporate boards.” It was meant to be a temporary exhibit, but now has a permanent spot facing the New York Stock Exchange on Broad St., in a bold stance with her hands on her hips.
Sometimes she is outfitted with something topical (she could be seen wearing a face mask when the pandemic was in its height, and this fall appeared with a white, lace collar, in memory of the late Supreme Court Justice Ruth Bader Ginsburg). Now, for International Women’s Day 2021, she has been surrounded by a broken glass ceiling, symbolizing “the many glass ceilings that women have shattered both in and out of the boardroom.”
The addition was commissioned by State Street Global Advisors, the third largest asset manager in the world, and was created by The New Motor, an art, architectural and retail fabrication company in Gowanus, Brooklyn.
A promotional video for the new addition to the exhibit reads, “From the boards of the largest companies, to elected positions around the world, and the second highest office in the U.S., here’s to all those who have broken glass ceilings, and to those who will. Stay Fearless.”
It doesn’t specify how long the plexiglass will be up, but if you want to see it we would head down some time today!
Source: Secret NYC
Fearless Girl Statue Glass Ceiling International Women’s Day