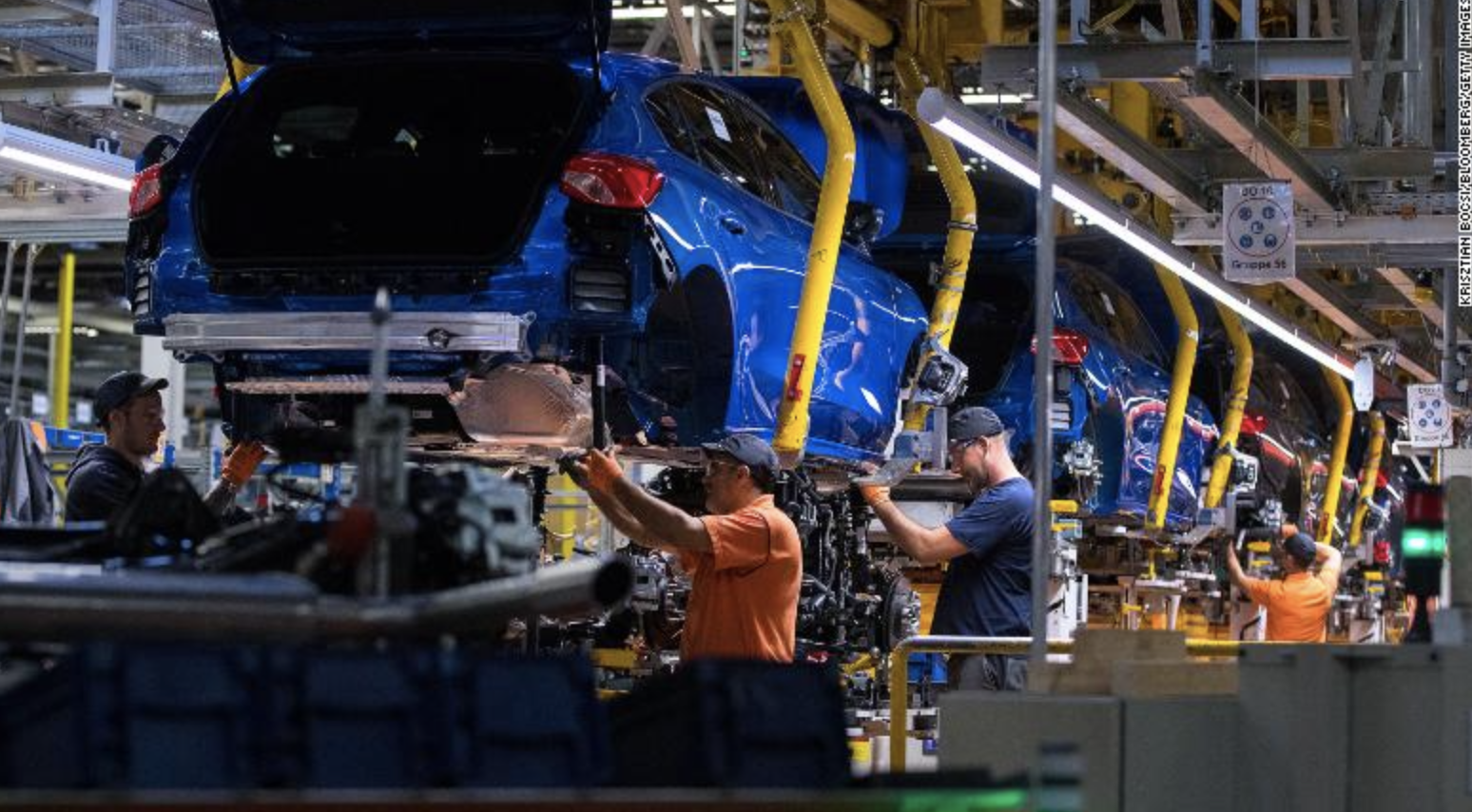 Back
Ford has ordered a month-long production halt at one of its plants in Germany, the latest sign that a global shortage of computer chips is putting carmakers under increasing pressure and threatening their recovery from the pandemic.
The US automaker said it would idle its factory in Saarlouis, Germany, from Monday until February 19 because of the chip shortage and weak demand. The plant makes Ford's most popular car in Europe, the Focus, and employs around 5,000 workers.
"We are closely monitoring the situation and adjusting production schedules to minimize the effect on our employees, suppliers, customers and dealers across Europe," said a Ford spokesman. "At this time, we do not anticipate any similar actions at our other European facilities."
Ford (F) was forced to close a SUV plant in Louisville, Kentucky, last week because of the shortage of semiconductors. But the shutdown in Germany suggests the problem, which is affecting carmakers around the world, could get worse before it gets better.
Leading semiconductor manufacturers reassigned capacity from automakers last year after the pandemic slashed car sales, instead shipping chips to companies that produce smartphones, gaming systems and other tech gadgets that remained in high demand. Supplies are still tight, and carmakers are struggling to secure the chips they need.
Volkswagen (VLKAF), Fiat Chrysler (FCAU), Toyota (TM), Nissan (NSANF) and Honda (HMC) are among the other automakers suffering from the shortage of chips, which are used in a growing number of applications including driver assistance systems and navigation control. The average car has between 50 to 150 chips.
"Light vehicle manufacturers are finding increased disruption to the supply of systems using semiconductors in the first quarter," Mark Fulthorpe, executive director for the automotive team at IHS Markit, said recently in a research note. "The situation is highly fluid."
The disruption comes at a crucial time for carmakers, which suffered a collapse in sales in the early months of the pandemic, yet remain under intense pressure from global regulators to invest heavily in electric cars. Research firm Bernstein estimates global vehicle sales will grow 9% in 2021, following an expected 15% decline last year — but the chip shortage is putting the recovery at risk.
Volkswagen (VLKAF) said in a statement last month that it will need to adjust production at plants in China, North America and Europe this quarter. The changes will affect production of the bestselling VW Golf, as well as models from its Audi, Skoda and Seat brands.
According to UBS analysts, the world's largest carmaker could lose out on production of 100,000 units in the first three months of the year, or roughly 4% of global quarterly output, as a result of the components shortages.
"We are doing everything in our power to minimize lost production and to ensure that normal deliveries to customers can be resumed as rapidly as possible," Volkswagen Group purchasing manager Murat Aksel said in a statement last month.
Audi said Monday that it has furloughed 10,000 workers because of the chip shortage, with production and shift patterns affected at plants in Germany and Mexico. Production of the luxury brand's A4 sedan and A5 cabriolet has been provisionally halted in Neckarsulm, Germany, through January 29.
"We are currently looking at a range of countermeasures and alternatives designed to mitigate the impact of the supply bottleneck and, in turn, minimize the number of vehicles affected," a spokesperson said. "Any improvement largely depends on the semiconductor industry."
In an interview published on Sunday by the Financial Times, CEO Markus Duesmann said Audi would try to limit production losses to 10,000 cars during the first quarter.
Fiat Chrysler said last week that it would delay the restart of production following a scheduled break at its Toluca, Mexico, plant, which builds the Jeep Compass. It has also scheduled downtime at its Canadian plant in Ontario, which produces the Chrysler 300, Dodge Charger and Dodge Challenger.
Japanese carmakers are also hurting. Toyota said it was forced to temporarily halt production at a plant in Guangzhou, China, on January 12, and it's cutting production at a Texas factory that makes Tundra pickup trucks. Nissan and Honda have both said they're "adjusting" production in response to the shortage.
South Korea's Hyundai said in a statement on Monday that it's "making effort to optimize supply of parts to ensure stable production at each production hub."
German luxury brand BMW (BMWYY) said last week that it has not yet had to contend with interruptions to production but is in "constant contact" with its suppliers. General Motors (GM) and France's Renault (RNLSY) have said they are working with suppliers to mitigate the impact on production, while Daimler (DDAIF)-owned Mercedes-Benz said it is "monitoring the situation."
Chinese factories may be worst affected
Production levels in Europe, North America, Japan and India are expected to be hit this quarter, according to IHS. But the biggest problem could be in China.
"At this stage, with varying levels of visibility across the supply chain, the biggest volume disruption is noted in mainland China where, based on available information, the risk could be 250,000 units in the first quarter," said Fulthorpe.
Chinese carmakers Brilliance Auto Group, SAIC Motor and Geely (GELYF), which owns Volvo, did not immediately respond to requests for comment on Monday.
Taiwan Semiconductor Manufacturing Company (TSMC), a major supplier of chips, said last week that easing the shortage is its "top priority." "We are working closely with our automotive customers to resolve the capacity support issues," CEO C. C. Wei said at an investor conference on Thursday.
Source: CNN
Ford