Foreign media responds to the resent developments in Georgia 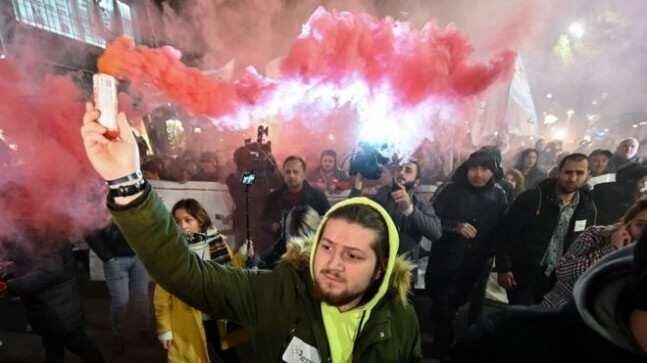 Foreign media responds to the resent developments in Georgia. As it is known, 28 people were arrested during the dispersal of the rally outside the Parliament last night.

According to BBC, Georgia police used water cannons on protesters in Tbilisi. Thousands of people demonstrated on Monday evening calling for reform to the country's electoral system. Several activists and a politician were arrested early on Tuesday.

BBC notes, that a few hours before police forcefully dispersed the demonstration, Mamuka Mdinaradze, a ruling-party politician, told reporters: "If protesters violate the law, the state will act adequately."

According to Reuters, Protesters were planning to block entrances to parliament and said they would not let lawmakers in for a session on Tuesday, but officials said that would not be allowed. Rallies have been held for the last two weeks, with activists demanding proportional representation.

“Our protest will continue until the resolution of the crisis that Ivanishvili created in the country,” David Bakradze, leader of the European Georgia party, referring to ruling party leader Bidzina Ivanishvili, an oligarch who critics accuse of ruling the former Soviet republic from behind the scenes.

Police used water cannon to scatter the protesters outside parliament on Monday and unblocked entrances to the building, arresting 37 people. But hundreds of protesters re-assembled in front of parliament on Tuesday evening.

To note, Georgia was due to switch to the proportional representation electoral system in 2024, but the opposition is calling for the date to be brought forward.