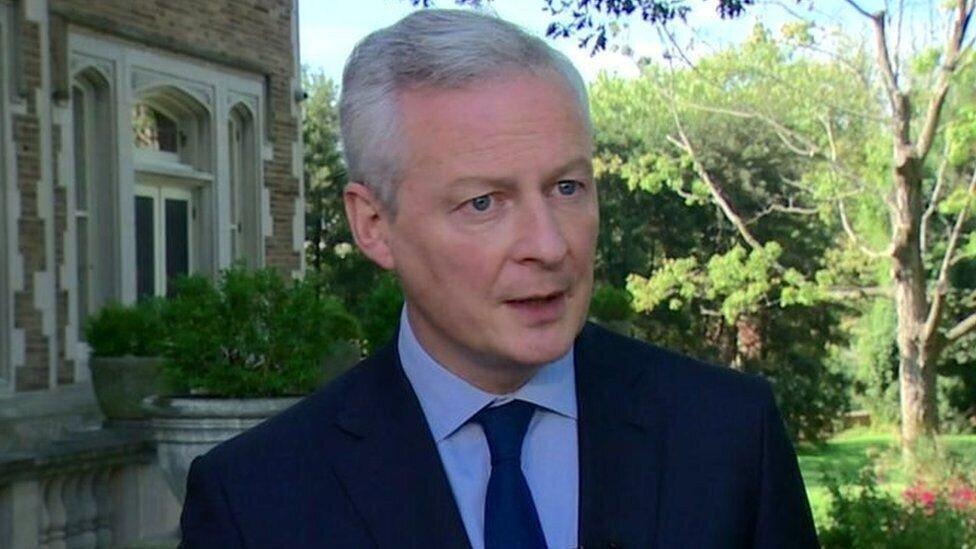 Back
French finance minister Bruno Le Maire has told the BBC that leaving the single market after Brexit has made the supply chain crisis worse for the UK.
"We are facing the same situation," he said at the IMF meetings in Washington.
"But the fact that we are a member of a very important single market helps us facing these bottlenecks."
UK retailers have warned this week of potential shortages in the run-up to Christmas due to a logjam at UK ports and a lack of lorry drivers.
"I think it's helping us because we can have access to other job markets, when you are asking for some more people in restaurants, in hotels, for truck drivers, for instance, you have access to other labour markets," Mr Le Maire said.
Talking to journalists in Washington, Mr Le Maire acknowledged: "We are all facing the same difficulties."
However, he added: "I want to emphasise that within the EU the fact that we have one single market helps us to face the difficulties in the labour market.
"Talking to [UK Chancellor] Rishi Sunak on that very specific point, I just want to recall that for the UK it's a little bit more difficult since they are no longer a member of the single market."
His comments came as several British retailers have said they risk shortages during the Christmas shopping season due to supply problems.
Speaking at the same event earlier this week, Rishi Sunak told the BBC that shoppers can be reassured ministers are doing "absolutely everything we can" to fix supply chain issues.
Mr Sunak pointed to global factors for delays seen at ports such as Felixstowe but said "I'm confident there'll be a good amount of Christmas presents available for everyone to buy."
Mr Le Maire also said Europe, not the UK, will be one of the world's three key economic powers.
"I don't want to criticise the British approach because this is the sovereign choice made by the British people," Mr Le Maire said.
"But you know, when you have a careful look at the current world situation, you have in the right side, the United States, on the other side, the rise of China, then there is one single place left - and this will not be for the UK. This will be for Europe. Let's be clear about that."
Mr Le Maire said G7 finance ministers also discussed a new plan to permanently reduce dependence on east Asia and China especially by sharing each other's supply chains and factories.
"We share the same values within the G7, within the European countries, we share the same approach on the economic issues on trade, so building these new value chains, among partners and among friends might be one of the solutions," he said.
Mr Le Maire also highlighted his view that countries have to work together on major projects.
"You need to gather efforts - you need huge financial investments that no country can make alone," Mr Le Maire said, giving the example of how expensive it is to invest in new technologies like hydrogen, artificial intelligence or the cloud.
"When you are talking about being more independent on the production of semiconductors, you need to put €50bn (£42.4bn) on the table just to build new plants for the production of chips, which means that between China and the United States once again, there is one single place left and I think it will be for Europe."
G7 finance ministers agreed on Wednesday to work closely together to address the crisis by ensuring supply chains are more resilient.
The G7 (Group of Seven) is an organisation of the world's seven largest so-called advanced economies. They are Canada, France, Germany, Italy, Japan, the UK and the US. Ministers and officials from the member countries hold meetings, form agreements and publish joint statements on global events.
Brexit France UK Supply Chain