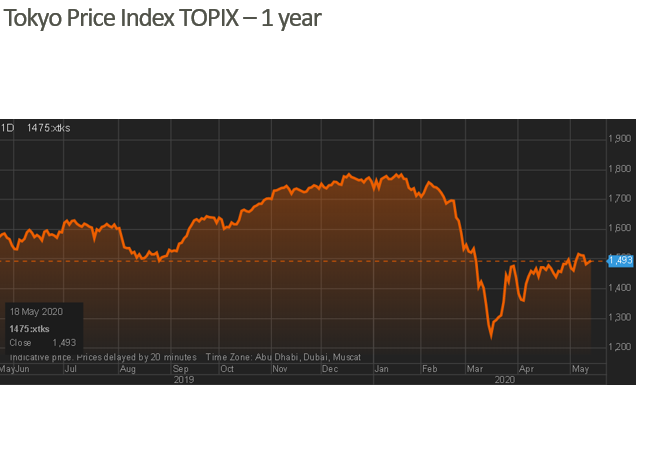 Japanese stocks posted mixed returns for the week. The Nikkei 225 Stock Average declined 142 points (0.7%) and closed at 20.037.47, down 15.3% for the year-to-date period. The large-cap TOPIX Index edged lower, while small-cap stocks in the TOPIX Small Index logged a modest gain. For the year to date, both broader Japanese market benchmarks have mid-teen percentage losses. The yen was modestly weaker for the week and closed near JPY 107 per U.S. dollar on Friday.

According to a Tokyo Shoko Research survey, bankruptcy filings related to the coronavirus accelerated in April as a result of stay-at-home orders and social distancing. The data showed 89 companies filed for bankruptcy in April, which is approximately 80% of the coronavirus-related bankruptcies for the year-to-date period. Most of the filings were small and medium-sized companies serving the tourism, food, and accommodation segments located in or near Tokyo. Analysts expect the total will continue to rise.

Bloomberg reports that Japan's largest banks are likely to report their highest bad-loan costs since the 2008–2009 global financial crisis. According to some estimates, the pandemic is expected to cause Japanese banks to set aside upwards of JPY 600 billion (USD 5.6 billion) in reserves for bad debt. On a positive note, recently released Bank of Japan data showed that domestic lending by major banks increased 3.4% year over year in April, which was the largest rise in lending since 2009.

Japan’s Prime Minister Shinzo Abe ended the state of emergency in 39 of the country's 47 prefectures on Thursday, May 13. The decision to lift the stay-at-home order was about two weeks earlier than the previously announced May 31 expiration because the spread of COVID-19 in those areas has declined to acceptable levels. The lockdown remains in place for heavily populated areas, including Tokyo and Osaka, to ensure that newly reported cases continue to fall and that the stress on hospitals subsides. At a press conference, Abe said, “the lifting of the state of emergency in many regions today marks the real beginning of our efforts toward a new normal in the era of the coronavirus." The prime minister added that the nation is making strides toward resuming normal social and economic activities. However, he suggested that people continue to avoid going to bars, live music events, and karaoke spots to reduce the potential for group transmission.