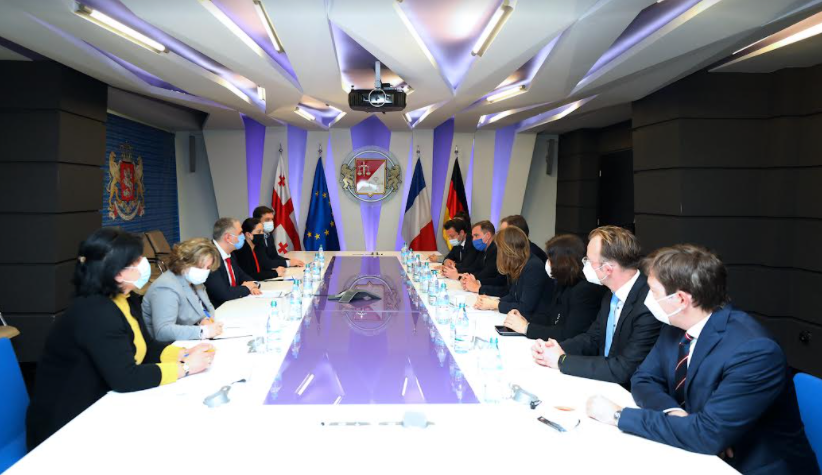 Georgia (represented by the Ministry of Finance of Georgia), Kreditanstalt für Wiederaufbau (KfW), Agence Française de Développement (AFD) and Delegation of the European Union to Georgia (EUD) have concluded a Declaration of Intent to continue multinational and international support for the Government of Georgia reforms efforts in the energy and green sectors.

The ongoing reform, which has achieved significant success with alignment of Georgian energy legislation with EU rules and best practices since 2018, will be extended in terms of both duration as well as scope. In addition to continuing the energy sector reform, Team Europe partners and the Government have expressed their commitment to develop and implement a reform focused on energy, climate, environmental and green transformation objectives akin to the European Green Deal. It should be noted that support for the envisaged reforms will be provided by the Development Partners.

Georgia has received 554 million euros (Germany/ KfW allocated 199 million euros and France/ AFD - 355 million euros) over the past four years, along with a grant financing for technical assistance in the amount of 8.44 million euros from the EU, implemented by KfW.
The Declaration of Intent and forthcoming actions and programs are in line with the spirit of Team Europe Initiatives. Team Europe is about European partnership and solidarity to build back better in a green, just, sustainable and efficient way, streamlining and harmonizing efforts of EU institutions and EU member states.

H.E. Hubert Knirsch, the Ambassador of Germany adds: “After a successful series of four policy-based lending operations on the energy reform in the past four years, the signing of a new “Declaration of Intent” now paves the way for an even deeper, more comprehensive and ambitious reform package for Georgia. This step mirrors the trustful cooperation between the Georgian partners and the Team Europe members Germany /KfW, France/ AFD and the EU.”

”The signing of the Declaration of Intent demonstrates the commitment of the Government of Georgia to implement fully the reform, to align with the EU standards, to foster a fair transition towards green economy and to become the regional platform for energy market and develop its energy sovereignty as well. Georgia is moving towards reforming the Georgian electricity sector to an EU style organized power market and is keeping the pace of being a transformative, progressive, and reformative country, leading to EU standards, with enhanced connectivity to Europe.” said H.E. Diégo Colas, the Ambassador of France to Georgia.

“We highly value fruitful cooperation and continued support of our international partners in the implementation of tangible reforms in Georgia. We would like to thank our partners who, at the dawn of the reform, have helped considerably to develop strategic frameworks of Georgia’s full membership in the Energy Community (EnC) and to implement the commitments under the EU Association Agreement. We would also like to express our gratitude to KfW, AFD and the EU for their joint efforts and close collaboration to develop green and energy sectors in Georgia. Even bigger plans lie ahead to scale up our cooperation, and I believe this would prove to be a great step forward to the implementation of the energy, environmental and climate sector reforms”,said H.E. Lasha Khutsishvili, Minister of Finance of Georgia.

“We are pleased to continue working together with Team Europe partners on furthering reforms towards European Green Deal goals in Georgia. The commitment of the Government to this reform is important for achieving the positive climate change, environmental, economic and social impacts for Georgia with the help of our assistance,” said Sigrid Brettel, Head of Cooperation of the Delegation of the European Union to Georgia.