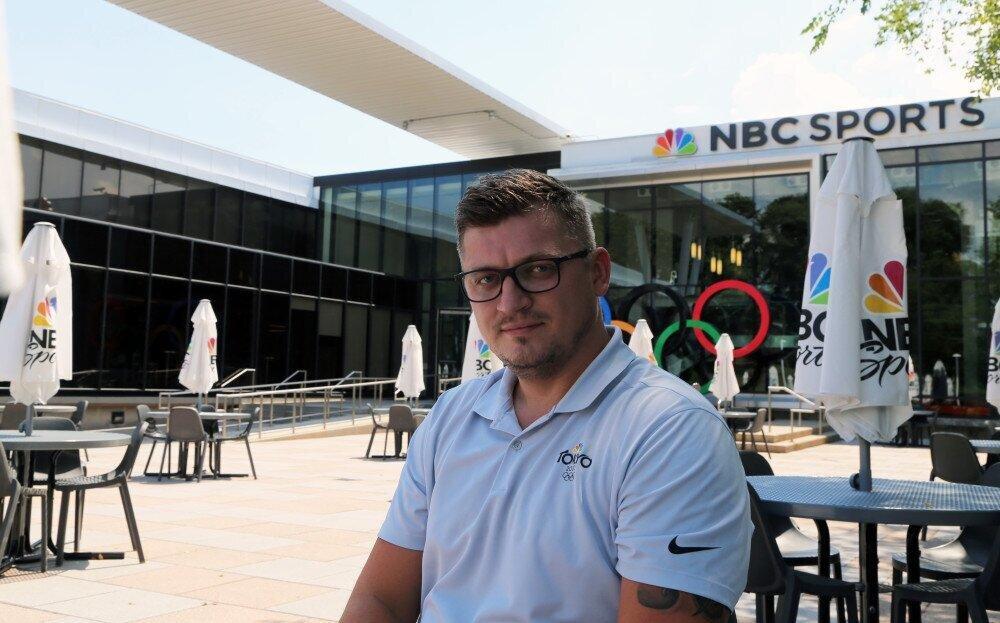 Denis Tskhadaia is a Georgia-born graphic designer. He currently works for one of the leading U.S. TV companies NBC Sports. Just recently his works have been recognized by the National Academy of Television Arts and Sciences of the U.S. and he won two Sports Emmy Awards.

Tskhadaia was born in a family of artists in Tbilisi, Georgia in 1983. His father is a sculptor, and his mother is an actress of a drama theatre. Denis was exposed to arts since his very early childhood. He has figured how to use a pencil when he was just three and since then he’s never stopped drawing. In his teenage years, he fell in love with the computer animated cartoons, movies and TV shows. Denis knew for sure, that he wanted to become a part of it. After leaving school, he’s never had a second guess, of which college to choose and consequently, he went into Tbilisi State Academy of Arts, with major in Media Arts & Sciences.

Prior to moving to the States, Denis has spent twelve years at a leading Georgian broadcasting company. Driven to higher heights by passion he decided to challenge himself and attain American Dream.

In his interview with BMG, Denis Tskhadaia, NBC Sports Designer shares his experience and life journey from Georgia to the USA.

You are working for one of the leading TV companies in the USA, with millions of viewers.
How did it begin?

My carrier at NBC started back in 2017. The company hiring agent reached out to me and invited for the interview in the Stamford office. I’ve met Creative and Art Directors crew that day. I remember we had a very good conversation. I told them about myself and shared my portfolio consisted of everything I’ve created in the past. They told me about the company, its plans and goals for the next few seasons and gave me a tour around the office and studious.

I was more than happy, when in a few days I got a call with the offer to start at NBC Sports as a freelance designer on site. For that time, I lived in New York and the commute was about 2 hours one way to Stamford. But nothing could stop me to make my dreams come true! Dreams to become a part of one of the biggest and reputable media company in the United States...

I used to work hard since the very first day, using all my creativity and knowledge. And it eventually paid off, when in 6 months I got an offer to become a full-time employee at the company.

Prior to moving to the States, you used to work at the leading Georgian broadcasting company. Share with us this experience and name your contributions/achievements to these companies.

In 2003 I started working at Broadcasting Company ‘Rustavi2’. It was a big achievement for me, newly graduate, 21 years old designer. For that time ‘Rustavi2’ was a very influential media source in Georgia. I had a chance to work with the most talented people, who gave me a priceless experience in the field. During 12 years at ‘Rustavi2’ I’ve made many rebranding on the channel, hundreds of TV shows design, entertainment, news and commercials. But after all these years, I’ve decided to get out of my comfort zone and challenge myself. I felt like it was a time to pursue my dreams and move on to the next level. This is how I decided to move to the United States.

We frequently hear that starting work on developed countries with Georgian background is almost impossible. How was it in your case, did you move directly from Georgian company to NBC Sports, or you had to take some extra classes?

In the beginning it took me around 2 months to find a job in U.S. In October 2016, I got a position in a small advertising agency in Brooklyn. It was better than nothing, but still not my dream work. After taking few different jobs, here and there, I finally got into Madison Square Garden television (MSG Network) on Manhattan for two weeks as a freelance motion designer. I’ve always thought, that getting position in a big American company, is probably almost impossible for the guy, from a small country in Eastern Europe like Georgia, but I was wrong. United States is the best place to advance yourself and check how good you are, because in U.S. it doesn’t matter what country are you from, or what is your name, ethnicity, race, gender or religion, if you are a professional – you will find your place.

Summing up - 12 years of experience in Georgian broadcasting company means a lot.

Let’s talk about the recently held Sports Emmy Awards, Games of the XXXII Olympiad and American Football SUPER BOWL. How was it, being recognized by the National Academy of Television Arts and Sciences of the U.S.?

On May 24th, 2022, we became the winners in two nominations. The first was Outstanding Graphic Design – Event – Show. Games of the XXXII Olympiad and the second - Outstanding Technical Team Studio Super Bowl VLI Pregame Show. It was an unforgettable evening! Very motivating recognition from the National Academy of Television and Sciences. I felt like I got an Oscar in my field. Since 2017 I was nominated almost every year for Emmys in many different categories for design: Premier League, Sunday Night Football, NHL on NBC (National Hockey League) and more. Finally, I’ve won two Emmy statues. It was a victory for all my efforts and hard work we did with my team!

What do you think makes you stand out from other designers?

If there’s one thing that’s extremely hard to do in the field of design, it’s trying to stand out. Remember that this is an industry filled with creative people. Everybody has their own thing and their own vision. Everyone either follows the rules or breaks them. If you are truly passionate about design, you have probably found yourself dreaming about being one of the greatest. You have the urge to stand out. It’s not easy, but possible. Here are a few habits that help me, in my opinion to stand out.

I keep an eye on other designers’ works. I try to figure out what is trending and constantly learn something new. This helps me to stay on track, be innovative and creative.

I think I would never be able to stand out, if I would have done what everybody else was doing. Always experiment, that’s the key!

And last, but not least, I always try to meet my company’s deadlines, because I appreciate their time. It makes you stand out not only as a creative designer but also as a professional one.

Name three main advantages of working and living in the U.S.

The biggest advantages of working and living in U.S. are being in the epicenter of events, meet many extraordinary people to gain and share knowledge and experience with. United States of America is a great country to make the most of your potential. This country has many opportunities for the talented and hardworking people. I would say, believe in yourself and all the doors you need will open!

What makes the USA a great country?

Freedom is a backbone of the USA! Living in an environment with no propaganda or censure, living in a democracy and freedom of speech is priceless. You can breathe calmly and deeply here. Freedom is very important feeling in everyone’s life especially artists.

What is your suggestion to Georgians thinking to move to the States and what are the three most important things that they can do to have success there?

To a Georgian who is thinking to move to U.S. I would suggest to not build a very high expectation. I’ve met a lot of Georgians, who had these high hopes and dreams about U.S. thinking that money grows on the trees here. But unfortunately, it’s not true. You must work hard to achieve something, or to be someone in this country. It will be hard in the beginning, but do not get discouraged! This is the place, where your hard work will be rewarded.

In my opinion, lots of immigrants make this one common mistake, they stay inside their ethnicity group and community. This fact doesn’t let them evolve, learn the language, culture and simply become a part of an American nation. Basically, what I am trying to say is that the communities are a great place to start, and figure things out, when you’ve just arrived. Because everyone is speaking the language you understand, the rent is cheaper, but such communities sink you in and longer you stay there it gets harder to get out and evolve. 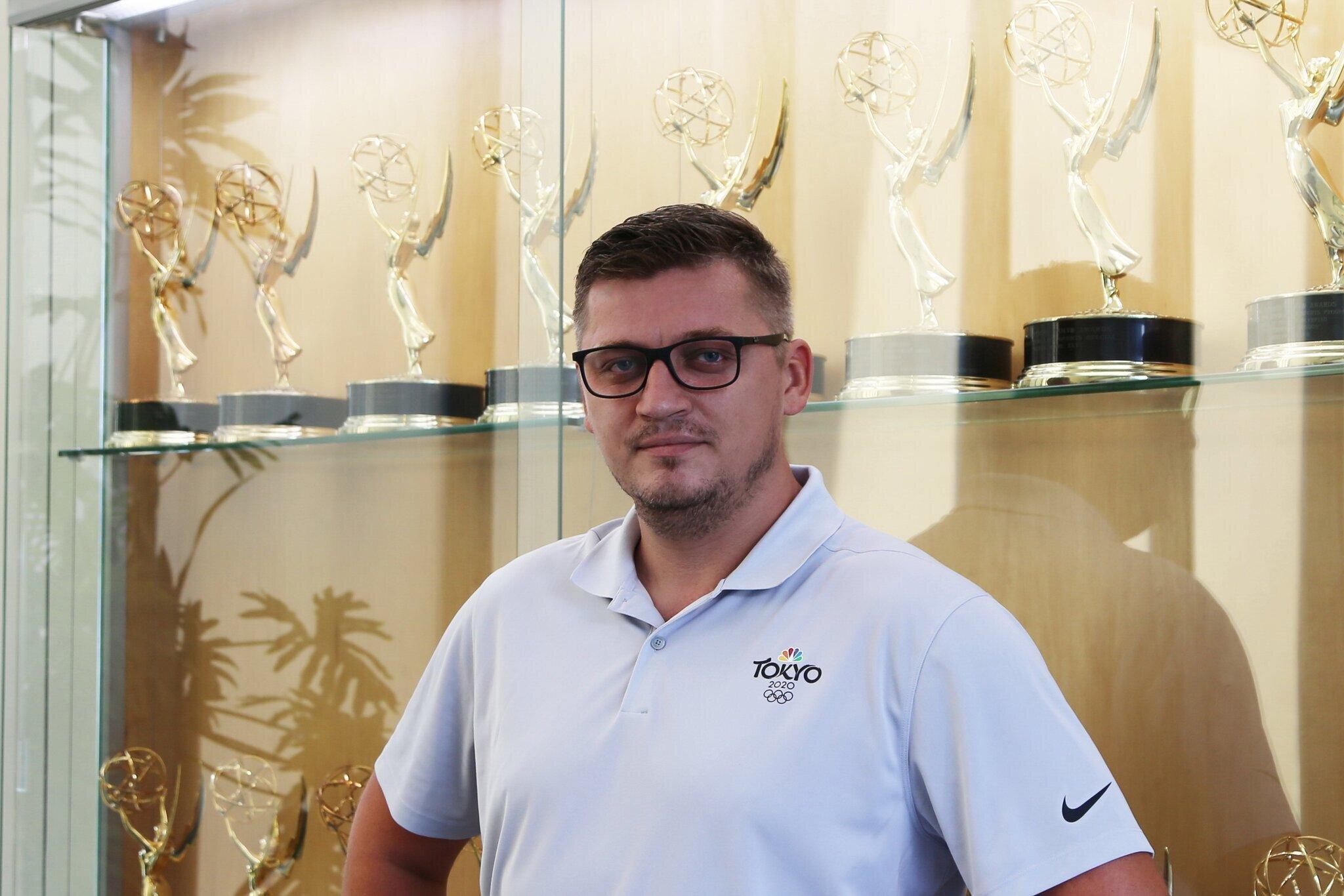 What’s the best piece of advice you have heard and repeat to others?

The best advice is – don’t listen to other’s advice!

When people offer you advice, they base it on what they would do if faced with a similar dilemma. But what they would do is based on who they are, not who you are. Their intentions may be pure, but the reasoning is often mismatched. Ultimately, it comes down to this - You are the expert on you. Nobody can know what’s best for you, so trust your instincts, stop listening to other people’s opinion, and own your own decisions.

Moving back to your profession, how do you see the field of broadcast design changing in the next few years?

I’m not a psychic to predict a future, especially in our rapidly changing world. But I know for sure, the technology grows exponentially. With the rapid audience shift from television to digital, staying relevant in broadcast media is challenging but necessary for long-term viability. Broadcast television is not dead - but it is evolving rapidly and there is a need to transform to avoid becoming irrelevant. With involving A.I. (artificial intelligence) into design, it’s not just hard, it is impossible to predict of how it could impact the field. We can already see the fascinating A.I. creations.