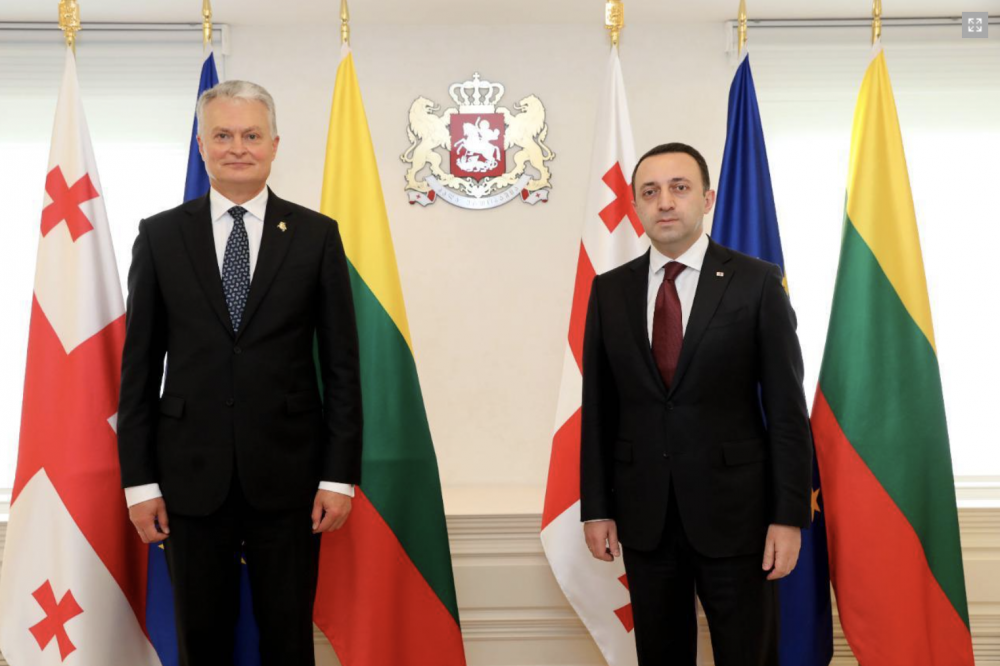 Back
Today, Georgian Prime Minister Irakli Garibashvili held a meeting with Lithuanian President Gitanas Nausėda.
The meeting at the Administration of the Georgian Government focused on the relations between the two countries based on shared values and principles, emphasizing the tremendous dynamism of bilateral interaction. Lithuania is one of Georgia's most active supporters, the parties pointed out.

The conversation revolved around successful and productive cooperation with Lithuania's delegations under various international organizations. The Head of Government thanked the Lithuanian President for ongoing support and the initiation of resolutions concerning Georgia.
The meeting also focused on the importance of deepening the economic cooperation between Georgia and Lithuania, especially in the post-pandemic period, to boost economic growth and people-to-people contacts. In discussing the challenges posed by COVID-19, the parties underlined the importance of access to vaccines. The Prime Minister thanked the President of Lithuania for the decision to donate 15,000 vaccine doses to Georgia.
Lithuania's unequivocal support for Georgia's path toward European and Euro-Atlantic integration was emphasized, and key directions of further joint activities and coordination were outlined. Georgia is preparing to apply for full EU membership in 2024, the Head of Government said and stressed the importance of political and economic reforms to that end. The parties discussed the upcoming NATO Summit, with the issue of Georgia included on its agenda, and expressed hope that the summit's declaration will reflect Georgia's significant progress on the path to Euro-Atlantic integration.
The meeting also paid special attention to the situation in Georgia's occupied territories and problems plaguing the populations along the occupation lines. The President of Lithuania familiarized himself with said concerns during his visit to the village of Khurvaleti. Gitanas Nausėda reassured Irakli Garibashvili of his firm support for Georgia's territorial integrity and sovereignty.

The meeting was attended by Ambassador Extraordinary and Plenipotentiary of the Republic of Lithuania to Georgia Andrius Kalindra, Chief Adviser to the Cabinet of the President Ieva Ulčickaitė, President's Foreign Adviser Skirmantė Straigienė, and President's Chief Adviser for Communications Raminta Stanaitytė-Česnulienė, while the Georgian side was represented by Foreign Minister David Zalkaliani and Georgia's by Ambassador Extraordinary and Plenipotentiary to the Republic of Lithuania Levan Ghvachliani.
NATO Georgian government Covid19 European Union Lithuania Irakli Gharibashvili Gitanas Nausėda