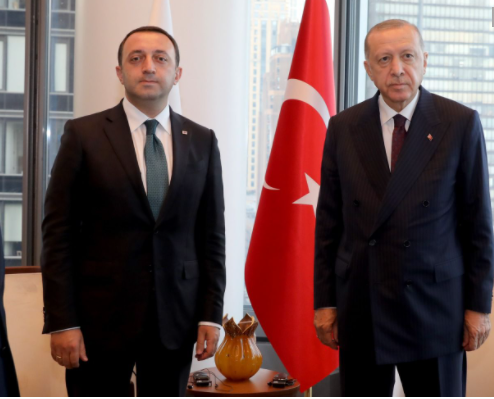 Georgian Prime Minister Irakli Garibashvili met with Recep Tayyip Erdogan, President of the Republic of Turkey, within the framework of the UN General Assembly.

The meeting was held in both face-to-face and enhanced formats within the framework of the 76th Session of the UN General Assembly.

During the meeting, the Prime Minister once again recalled his state visit to Turkey and thanked President Erdogan for his exemplary hospitality.

The dialogue also touched on the agreement reached between Armenia and Azerbaijan through the Georgian Prime Minister's mediation and engaged from the US, resulting in the release of Armenian citizens and maps of mined territories handed over to Azerbaijan. This agreement is an excellent foundation for further cooperation between the neighbors, the parties underlined.

Irakli Garibashvili specifically emphasized President Erdogan's special effort toward further deepening the strategic partnership between the two countries. The parties paid special attention to the expansion of the political and economic ties between the two countries as a top priority, also expressing hope that the High-Level Strategic Cooperation Council will convene before the end of this year.

The Head of Georgian Government once again singled out President Erdogan's personal support for Georgia's territorial integrity and sovereignty, also for the country's European and Euro-Atlantic integration, and expressed his gratitude for that.

After the meeting, the Prime Minister acknowledged his visit in the guestbook at the Turkish House in New York.