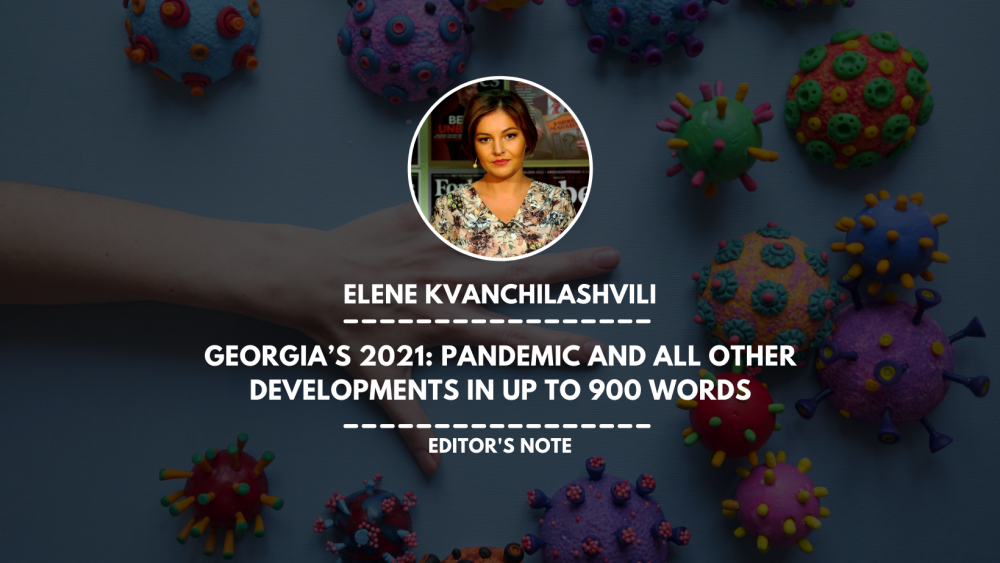 Back
Author:Elene Kvanchilashvili
Let us be crystal clear: Summing up 2021 in my sphere – business and economics – means summing up the way COVID-19 has been handled by the government. Here are the two facts: First - up to 40% of the adult population has been fully vaccinated up to date, instead of 60% targeted by the National Vaccination Plan, and second: 40-50 people still die of COVID daily in Georgia, making this country on top of the death toll list globally. These two facts are really all one needs to sum up this year: It was a disaster in terms of saving peoples’ lives.
What was NCDC doing then – you may ask? Or the coordination council - you have one, right? Was their voice heard?
Not much, since through the whole year, the Georgian government seemed to pursue more of a political, rather than epidemiological logic of fighting the pandemic. Elections that have been named as a referendum both by the opposition and the ruling party turned it into a somewhat zero-sum game, where the pandemic was viewed as the opportunity to first gain votes and then to maintain the majority backing rather than to abstain it.
This motivation turned out a solid ground for:
…And so on and so forth.
How did the economy react? That’s a good question and a tough one to answer at the same time. It all depends on how one deconstructs the two-digit economic growth. Was it because of the low base in 2020? – Definitely: the economy plunged by 6.1% that year. Was it because of the unprecedented financial support from IFIs and Georgia’s development partners? – No doubt about it: at the very beginning of the pandemic, our partners pledged over 3 billion in support to Georgia. Was it because of the government’s right priorities? – We can argue about that: Georgia’s economy is mostly dependent on tourism; even with the two-digit economic growth, the level of tourism recovery is still way lower than in 2019, before the pandemic hit the world and you would agree, that being in a red zone pandemic-wise does not help the objective to grow economy by growing tourism.
Now let us look at out-of-pocket payments. This term in Georgia has somehow been linked only to medicine prices and how much one has to pay for drugs in this country. The new and still pandemic reality, however, suggests that out-of-pocket payments have increased in almost all sectors – we have to pay record more for food, housing, transportation – everything.
Inflation is a global problem – that’s what we hear most of the time as if anyone claims otherwise. However, when NBG’s target for inflation stays at 3% and the actual inflation is almost 4.5 times higher – be it global or not – it needs some sort of solution, or at least an ongoing patient and non-hostile communication.

By the way, 2021 was a disaster in terms of strategic communication as well. It seemed no one from the government had enough time to explain why the certain level of vaccination could lead to a freer lifestyle; to more open businesses; to more saved lives; to more motivation to search for a job. As of today, Georgia still lives from one wave of a pandemic to the other with a never-leaving question luring in the air constantly – will there be another lockdown?
Currently, the answer is clear – it’s no. And one could argue that mostly this is reflected in growing business confidence that has started to pick up from late 2021. But here again, it is easy to notice how the pandemic deepens the disparity even in terms of business anticipations of the future: It is tougher for SMEs that run off the buffers to withstand even existing regulations.
So, could 2021 have been even worse than this? Of course: For us, the survivors in 2022 even this less seems to be more.

2022 started with promises to vaccinate more than 70% of the population ASAP; to curb the deficit and help curb inflation, etc. But in the country where the Health Minister points to her resignation during the pandemic without officially leaving the cabinet for almost a month after her statement and where no one is personally accountable for an unimaginable death toll that the post-COVID period will make us face up close – promises are promises.
Unless: in 2022 Georgia will not settle for less.
inflation HPPs Covid19 covid19 vaccine Judicial Reform georgian economy pandemic IFIs