Giorgi Gakharia Met the PM of the Kingdom of Netherlands 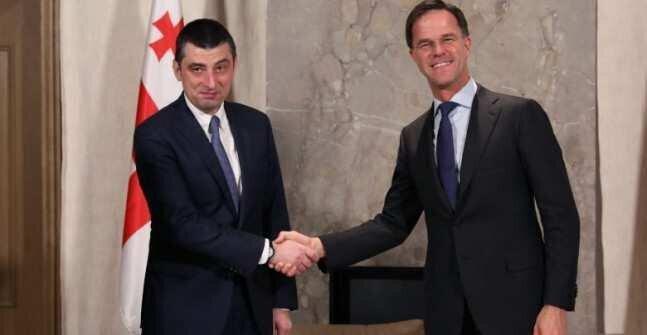 Giorgi Gakharia, Prime Minister of Georgia is visiting the Kingdom of Netherlands.

Meeting with Mark Rutte, Prime Minister of the Kingdom of Netherlands was held within the scope of the visit.

Host dignitary once again assured the visiting Prime Minister in the solid support of the Netherlands towards the sovereignty and territorial integrity of Georgia.

Parties discussed challenges in the area of security and difficult humanitarian condition existing at the occupied territories of Georgia.

Focus was made on the historic significance of the visit paid by the Prime Minister of Georgia, as the Head of Government of Georgia visited the Kingdom of Netherlands for the first time within the format of a bilateral visit.

Special attention was paid at the meeting to the successful interaction of the two countries in various sectors and greater development potential of trade and economic cooperation.

Substantial increase of Dutch tourists to Georgia has been underlined as well and hopes were expressed that positive trend in the area will develop further.

Meeting between the Prime Ministers was followed by Joint Media Statements.