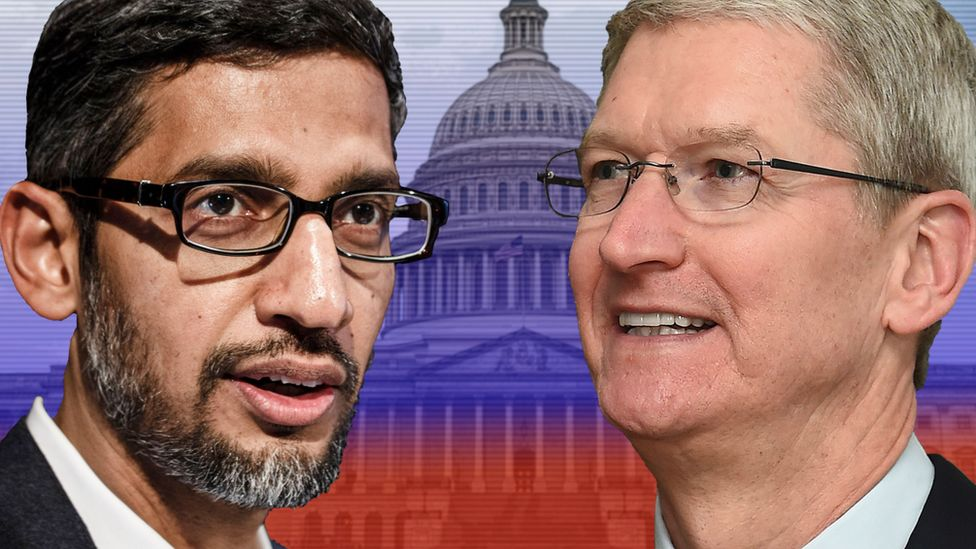 Back
Senators have grilled Apple and Google in Washington over "anti-competitive" behaviour related to their app stores.
Representatives from Tile, Spotify and Match also gave evidence, accusing the two tech firms of charging exorbitant fees and copying their ideas.
Both Apple and Google's app stores charge fees of up to 30% for in-app purchases.
The two companies said the fees were justified to provide security for users.
The Senate Judiciary Committee's antitrust panel focussed on claims that Apple's App Store and Google's Google Play are anti-competitive.
Senator Amy Klobuchar said that Apple's App Store was a "literal monopoly".
She said both stores "exclude or suppress apps that compete with their own products" and "charge excessive fees that affect competition in the app store economy".
Google Play and the App Store are where the vast majority of apps worldwide are downloaded.
Developers claim that because of a lack of competition Apple and Google can charge extortionate rates.
There were also claims that Apple used its App Store to unfairly compete with rivals.
The hearing came a day after Apple launched its new product: AirTags. These can be attached to items like car keys to help users find them.

The product looks very similar to something already on the market - Tile.
Tile's General Counsel Kirsten Daru said "We welcome competition but it has to be fair competition and Apple's idea of competing is patently unfair."
She also accused Apple of preventing Tile from using the technology behind Apple's Find My function, giving AirTags an unfair advantage.

Apple said the product was different. "We didn't copy Tile's product... It's extremely different to anything else on the market," said Apple's Chief Compliance Officer, Kyle Andeer.
Spotify also accused Apple of using its App Store to charge unfair rates - something Spotify's Head of Global Affairs, Horacio Gutierrez, described as an "Apple Tax".

Undercutting us
He also said that Apple directly competed with Spotify with Apple Music, and the in-app charges had made Spotify less competitive.
"They are undercutting us on price," he said.
He also criticised Apple for having rules that meant they were unable to tell customers that the service was cheaper if it was bought away from the App Store.
Apple said that Spotify had "been incredibly aggressive when it comes to dealing with artists and creators, and driving a hard bargain".
Mr Andeer said that "less than 1% of Spotify users pay a commission to Apple".
Match, which owns Tinder, also criticised Apple and Google for the charges it had to pay.

"It is iron-fisted monopoly control," said Match General Counsel Jared Sine.
"When an industry player has the power to dictate how apps operate, how much they will be forced to pay, and in many cases, if they will even survive, it is a monopoly."
Both Apple and Google rejected the idea that their app stores were monopolies - and said the charges were fair.
On 3 May, Apple and Epic Games, maker of the popular game Fortnite, will begin a court case in their dispute over the App Store charges.
Source: BBC
Apple Google