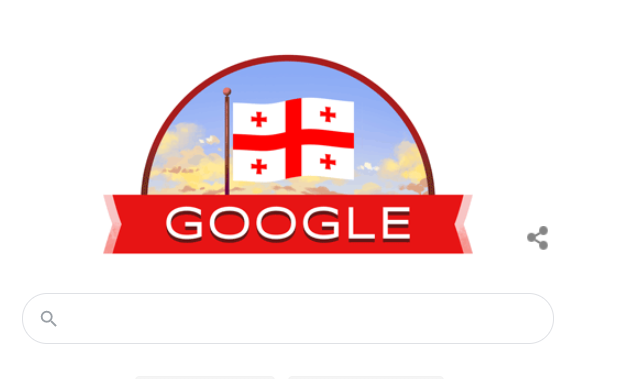 Google congratulates Independence Day to Georgia and gives information about the history of Georgia’s independence.

“Today’s Doodle honors Georgia’s 102nd Independence Day, also known as Day of the First Republic. Referred to locally as Sakartvelo, Georgia was first declared a sovereign democratic nation by the adoption of the Act of Independence on this day in 1918. The country became a part of the Soviet Union in 1922 and regained total sovereignty once again in 1991.

Situated at the continental intersection of Asia and Europe, Georgia is home to 12 unique climate zones, ranging from the alpine peaks of the northern Greater Caucasus Mountains to the subtropical shores on the eastern edge of the Black Sea. Across the ecologically diverse region, many Georgian’s display the national flag in commemoration of Independence Day and the achievements of their nation.

Depicted in today’s artwork, Georgia’s flag features a central cross surrounded by four “crosslets” in the national color of cherry red overlaid on top of a white background. Although elements of the flag’s design date back to the 14th-century medieval Georgian kingdom, it was not officially adopted in its current form until 2004”,Google notes.