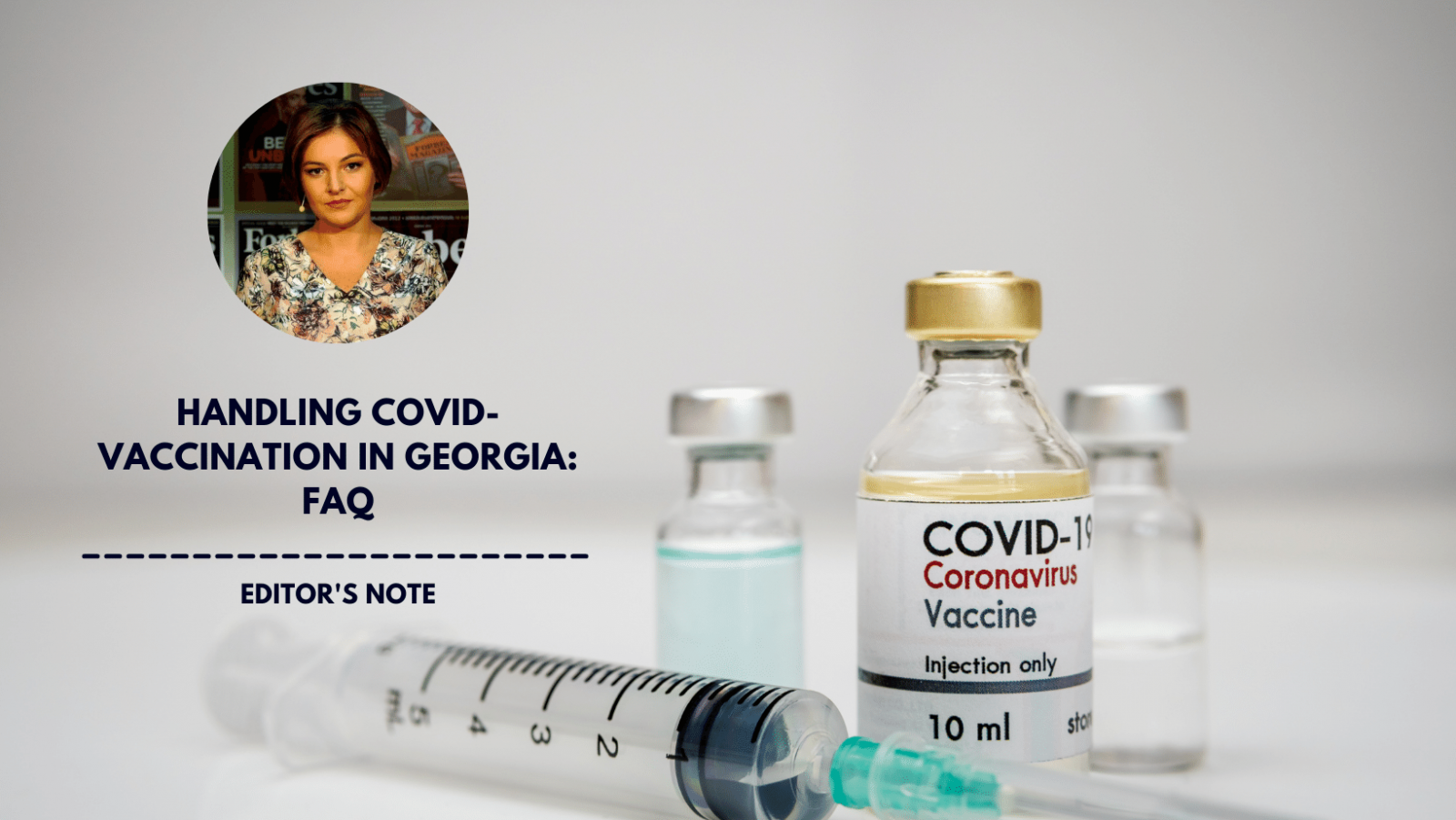 Back
Author:Elene Kvanchilashvili
This process lacks Benjamin Netanyahu in my country – this quote by George Gotsadze, President and CEO at Curatio International Foundation (CIF), on the COVID-vaccination process in Georgia in need of serious political leadership has totally preoccupied my mind for the last month or so since the online interview was recorded for Forbes Health platform. In this Editor’s Note, through basic FAQs, I will try to show you – why this quote is so central to the big picture that all of us have to deal with today.
WHO IS RESPONSIBLE FOR THE DELIVERY OF VACCINES TO GEORGIA?

The government says it is the Inter-Agency Coordination Council which unites all the relevant ministries of the country, representative from the Ombudsman’s Office, NGO sector and experts. According to Deputy Minister of Health Tamar Gabunia, the Council fully drives the vaccination process in Georgia. To say the least, this means that if the National Plan on Vaccination Deployment fails to cover 60% of the whole population of Georgia by the end of this year, minimum the PM of Georgia who is in charge of the Council will have to bear all the responsibility and resign. As for NCDC, the Deputy Minister of Health has explained to us today that it will only purchase Astrazeneca, since this is the right mechanism for UNICEF, which is also involved in the process. What we heard today is that the National Center for Disease Control has already transferred USD 575 thousand to the Covax platform, but as the experience shows, this is no guarantee that the vaccination will start soon, since Georgia has already transferred 4 million USD to the same COVAX Platform, but Georgia has no vaccine to this day.

WHEN SHALL WE HAVE A COVID-VACCINE IN GEORGIA?
The most accurate answer to this question is that we don’t know, but the officials restrain from this direct answer and set approximate dates that are then permanently breached. For example, we knew that the Pfizer vaccine was due to arrive first in mid-February, then in late February, and now the date is still open. The delivery date of Astrazeneca was first set to mid-March, now it has been postponed to the end-of-March. The delivery of the first vaccine to Georgia is linked to the start of the vaccination process in Georgia, which is crucial not only from the epidemiological but also from the economic standpoint, since the full opening of the economy and the abolishment of curfew is tightly linked to the success and scale of the vaccination process.

As the ex-Health Minister Zurab Tchiaberashvili mentioned in the live interview with Analytics last week, it seems the authorities are more prone to find excuses and blame others for the delays in the vaccination process rather than find solutions, and when they cannot find the solution, this is also somebody else’s fault. Right now it seems that neither the Council, nor the NCDC bear any responsibility about the specific dates of the vaccine arrival to the country in the short and medium-term. And yes, the authorities do always have arguments as to why it has become impossible to receive the vaccine earlier.

HANDLING PFIZER AS AN EXAMPLE OF… YOU NAME IT

Despite what the officials have told us so far, it’s still the fact that the vaccination process has not picked up from late February as promised. Georgia was set to receive at least 29 thousand doses of Pfizer though the COVAX platform, but it couldn’t. By the end of February, representative of the Ministry of Health and epidemiologists started talks that Georgia would receive the Pfizer vaccine in early March and elaborated on different reasons for the delay – one being the global shortage and the other being the additional - transportation and some other conditions that the producer company had presented Georgia in what seemed a surprise move for the government. Yesterday, a different explanation came from one of the news agencies in Georgia quoting the COVAX platform that it had delivered vaccine in February to those countries that had adjusted to the set criteria for handling Pfizer vaccine.
Health Ministry responded to this information both yesterday and today. Yesterday the Minister Ekaterine Tikaradze did not rule out the possibility to sue COVAX platform for breaching the agreement. But today her Deputy Tamar Gabunia assured us that “the misunderstanding with COVAX was cleared and the cooperation continued”. The same day-today, after the Inter-Agency Coordination Council meeting had ended, head of NCDC Amiran Gamkrelidze stated that the agreed amount of Pfizer – 29 250 doses - would reach Georgia soon. As we have also found out today, money for Pfizer doses is yet to be transferred. The government is in a waiting mode for a phone call from COVAX and Pfizer to make the final agreements. To this point, the date when Georgia receives Pfizer vaccine is left open.

SO, WHAT IS THE PLAN?

Georgia’s main mechanism for receiving COVID-vaccine is the COVAX platform but the maximum it can administer to Georgia is 1.4 million doses of vaccines (covering about 23% of the population). As per National Plan for the Vaccine Deployment of Georgia, the rest 1.5 million doses (or the 37% of the remaining population) have to be drawn through different mechanisms. Two such mechanisms include cooperation with EU and its member countries so that they give us their surplus vaccines either through procurement or through donation, and the other mechanism is direct negotiations with the producer companies of the vaccines.

This mechanism is normally more expensive than the other two, but the private sector has already approached the government with the proposal to attend such meetings with direct manufacturers and pay their own money for the doses that are needed to vaccinate their employees. Proposals coming from the private sector also include donating proper transportation means for Pfizer vaccine, supplying the government with dry ice and so forth. All these proposals are left unattended to this day.

In the most recent interview with Shane Rosenthal, Country Director of the Georgia Resident Mission of ADB, I tried my best to get his quote on specific vaccines. In vain, of course - despite mobilizing all my interviewing skills, he wouldn’t comment on any particular vaccine.

What he told me though was that if any country wanted to use ADB’s facility to purchase vaccine, then the influential financial institution would require that the vaccine financed through the facility was approved by a stringent regulatory authority. The other quite a big part of our interview touched upon the importance of how different vaccines would be perceived by the population – this being also very important for Georgia to reach its target of 60% of population being vaccinated by the end of 2021.
Today, CNBC reported that Hungary, the Czech Republic, Slovakia and Austria have all expressed an interest in procuring and deploying Russia’s “Sputnik V” vaccine, despite the fact that such a move is perceived as a headache for the EU.
In such a case, if the option falls on Russia’s vaccine, I would wish the public perception of this vaccine to be similar to that of Kaki Zoidze, Former Chairman of Parliamentary Committee on Health and Social Issues. In his interview on the Forbes Health platform, he emphasized that Russia’s vaccine to him is not an option since Russia would definitely use it against Georgia politically.
BUT WHAT IF SPUTNIK V IS LEFT THE ONLY OPTION?
Georgia Covid19 covid19 vaccine

The right for Pfizer vaccination was granted to 10 medical institutions, for AstraZeneca - to 12