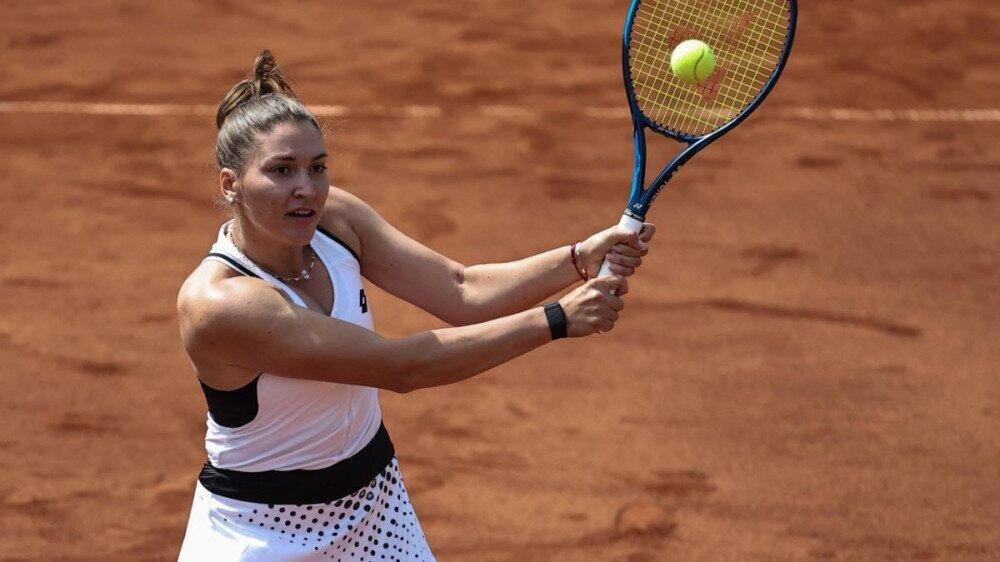 Natela Dzalamidze arrived at the All England Lawn and Tennis Club earlier than usual on Sunday, taking time to chat with DW ahead of training.

The 29-year-old doubles specialist has been at the center of attention ahead of Wimbledon, not because she and her playing partner Alexsandra Krunic are among the favorites, but because of the national flag she will be playing under.

Despite being born on the Russian island of Sakhalin, north of Japan, Dzalamidze is no longer representing the country of her birth and that of her mother, but rather Georgia, from where her father hails.

In doing so, the world No. 45 has circumvented Wimbledon's ban on Russian and Belarussian athletes, imposed following Russia's invasion of Ukraine.

Dzalamidze, who has held a Georgian passport for the past six years, began the process of officially switching her sporting allegiance soon after the invasion, submitting her documents to the Women's Tennis Association (WTA) at the end of May. The WTA confirmed her change of status on June 6, one week before the registration deadline for Wimbledon.

"My decision was made because I am focusing on my career and would like to have the chance to compete at the Olympic Games," she told British broadsheet "The Times."

At the World Swimming Championships currently taking place in Budapest, Russian and Belarusian female athletes are banned due to the invasion of Ukraine, just as they are at events in most other sports.

Russians, Belarusians excluded at Wimbledon only

In tennis though, the men's ATP (Association of Tennis Professionals) and WTA tours see their players more as independent entrepreneurs than as representatives of their countries' governments and thus decided that the athletes in question should be allowed to compete under a neutral flag.

However, the four Grand Slams operate independently from the ATP and WTA, and the All England Club, which organizes Wimbledon, is said to have reached its decision to exclude Russian and Belarusian players in close consultation with the British government.

To deter events from following suit, the ATP and WTA withdrew the world-ranking points that players would normally have earned at the tournament. Since then, there has been much rumbling behind the scenes and every decision, like Dzalamidze's change of allegiance, is being viewed with suspicion.

'I followed the rules'

"I didn't trick Wimbledon or the players. I followed the rules," Dzalamidze told DW. "We received mails with entry deadlines... There was also a line stating that any player that wanted to change nationality had to do so before June 3."

Dzalamidze said that after reading that line, she expected several other players to change nationalities as well. In the end, though, she was the only one.

She said that she had originally hoped to make her debut for her new nation at a preparatory tournament, but these plans had to be canceled due to health reasons.

"I knew it would become a big deal if I started to play as a Georgian at Wimbledon," she said.

Dzalamidze's father's family fled what is now the autonomous republic of Abkhazia [officially part of Georgia] in 1992, when war was raging. She was born a year later, so she has no personal experience of the war, but she is horrified by what's happening in Ukraine.

"It is impossible for me to understand the pain and the situation there," she said. "I cannot understand what it's like when rockets are flying around, and you fear for your life."

These are strong words for a Russian-born athlete, even if she avoids the use of the word "war," which can get you in trouble with the law in Russia.

"I understand Ukrainians and their position. When it started, I was subjected to a lot of aggressive behavior and messages even from people that were close to me," she said, before stressing that neither she nor any other Russian athlete had anything to do with the decision to invade Ukraine.

"I don't want to make excuses for what's going on in Ukraine but for us athletes it's unfair to be subjected to this general prejudice," she said.

"In the beginning I felt ashamed to have a Russian passport but later I thought: 'Im a good person why am I feeling like this?' For many years I worked hard to achieve my goals as an athlete and then because one person decided to start something terrible, I'm supposed to forget about my life and career?"

The bulk of the hate messages she has received on social media since announcing her decision to switch allegiance have come from Georgia, she said.

"Most of them thought I was just trying to take advantage of the situation for Wimbledon before switching back to the Russian federation afterwards." But that, Dzalamidze said, is completely out of the question.

"My first name is Russian, but my last name is not. I'm half Russian," she said. "In Russia, everyone understands that I'm not completely Russian when they see my name, which comes from Georgia."