IDFI: Venice Commission concludes that institution of special manager violates the requirements of the Convention 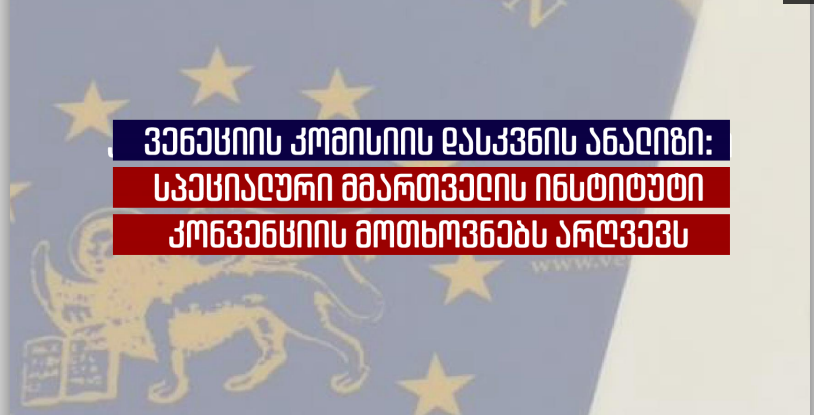 Non-governmental organization Institute for Development of Freedom of Information (IDFI) responded to the decision of the Venice Commission, which evaluated amendments made to the law “on Electronic Communication” in July 2020.

According to the amended law “on Electronic Communication”, GNCC has a power to appoint special managers in the companies.

The Venice Commission concluded that these changes have “far-reaching consequences for the right to property and media freedom, as well as to the right of a fair trial.”

The IDFI has published its own assessment of the report, noting that the Venice Commission rarely publishes such harsh conclusions. The Commission considers that adopted legislation in Georgia is incompatible with the European Convention.

In its decision, the Venice Commission sharply criticizes the changes made to the Georgian legislation. All aspects related to the institution of a special manager are assessed negatively. According to the conclusion, special governing powers are more like the competence of a liquidator. The Venice Commission emphasizes that it is “unaware” of such powers in the hands of any relevant European regulatory authorities.

According to the decision of the Venice Commission, the powers of the special managers are “so vast and over-reaching that the only limitation seems to be the alienation of the shareholding, leaving the shareholders with no say in the decision-making structures or processes within the company”.

It is important to note that IDFI has consistently emphasized the incompatibility of the appointment of a special manager with the competence of the National Communications Commission. This assessment of the Venice Commission once again highlights the problem of hasty legislative changes made by the Parliament of Georgia and other state actors. At the same time, the conclusion confirms that the institution of a special manager threatens the fundamental principles of a state, governed by the rule of law and democracy.